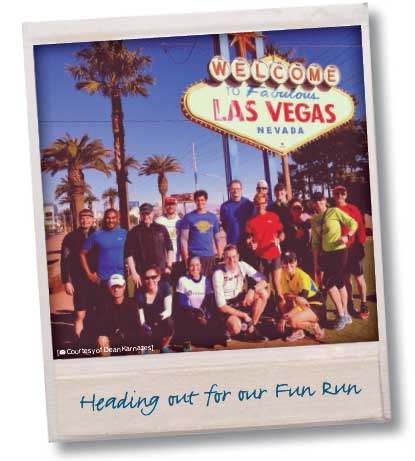 I just returned from the Consumer Electronics Show in Las Vegas, where I glimpsed into the future. And there ain’t nothin’ left to hide.

The number of training sensors, monitors, probes and trackers is revealing (or exposing) just about every imaginable bodily function the human system is capable of performing. Beyond some of the familiar items, there were all-in-one wrist trackers that are GPS-enabled, have strapless heart rate monitoring, log the number of calories burned, receive incoming text and record quality of sleep.

Delving deeper into your anatomy, there are sensors that detect blood sugar levels, body fat percentage, lactic acid accumulation and hydration status. Get this, there’s also a device that uses a piezo pressure sensor to automatically compute the number of calories consumed. That’s right, no need to keep a food log for counting calories any longer: just eat away and the wristband computes it all for you.

Mind you, none of these external devices will even be necessary in a few years, because several companies have already introduced implantable technology that will do the job while conveniently hidden under the skin. I wonder, though, will you be able to pass through airport security?

When it comes to running technique, there are now footbed sensors that not only detect pronation or supination, but also tell you if your form is falling apart and whether you should adjust your gait or cadence to prevent injury. Toward the end of a 100-miler, it just might blow a circuit or two.

On the recovery side of things, there are plenty of massaging devices and chairs, smart beds that automatically shape-shift to prevent pressure points and electronic muscle stimulators that speed recovery, condition, accelerate healing and relieve pain and soreness. All good, but if you adjusted the voltage too high, it might frizz your hair.

It got even more trippy when I left the health and fitness side of the show and entered the main arena. There I saw a robotic guard dog that was trained to chase down intruders and attack. Let’s hope you don’t accidentally run up that driveway.

Next came the drones. There were micro-drones the size of grapes that could be launched into the air by the fistful. We’ve all been hearing about the delivery drones. Unfortunately, I didn’t see any that deliver pizza.

However, I did see plenty of 3D food printers (yes, you read that correctly). Not happy with any of the energy bar choices out there? Just draw one up on your computer and print it in your office.

Finally were the “autonomous” cars (they no longer use the term “driverless” because that freaks people out). Mercedes showcased a car that allows the driver to push a button on the dashboard and the two front seats rotate 180° to face the rear passengers. The engineers giving the demonstration assured spectators that these vehicles have never had an accident with another car. Afterward, I asked one of them what would happen if a runner unexpectedly darted out in front of one. He rubbed his chin and gave me one of those looks like, “Jeez, we never thought of that…”

So there you have it. I’m not entirely sure what the future holds in store, but I can assure you of one thing: I’ll be spending a lot less time on the roads.