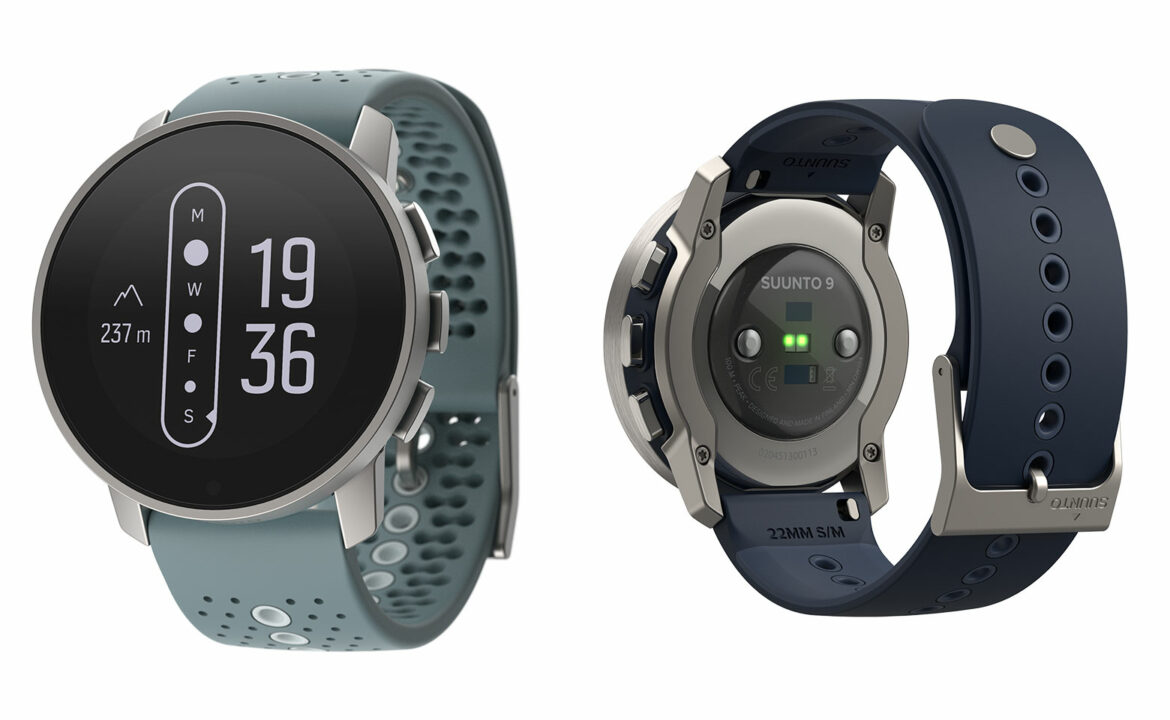 The Suunto 9 Peak is the latest addition to the company’s top end, multi-sport adventure line. As a successor to the 9 Baro, the most obvious difference between the two watches is their physical size: the 9 Peak is 36% thinner than the Baro and is 36% lighter (52g vs. 81g). On the wrist, this makes the Peak 9 much more user-friendly with a luxurious look and feel that accommodates athletic use and business attire. That said, users will find the biggest updates on this model include a slimmer profile, aesthetic design and improved software. 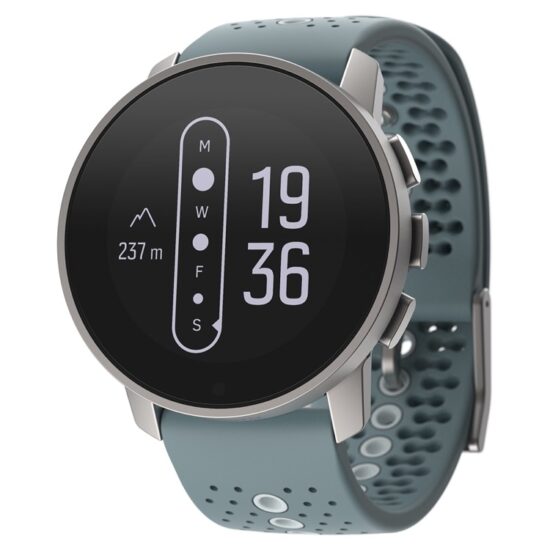 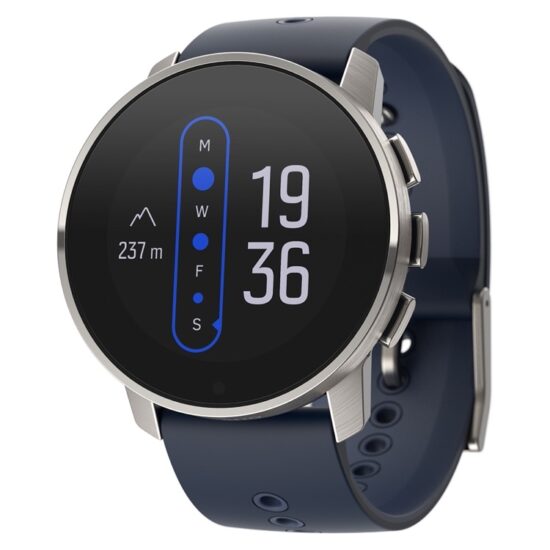 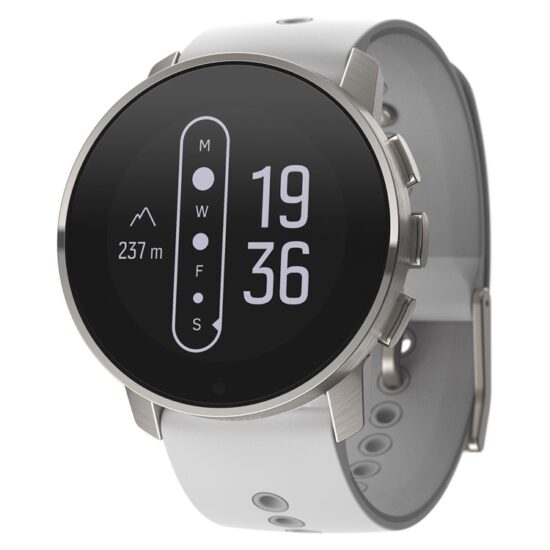 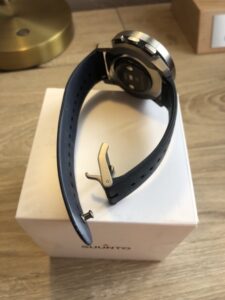 Instead of a traditional strap stay, a plug clasp fits into holes of the opposing strap

Four model options of the Suunto 9 Peak are offered: two stainless steel and two titanium. We tested the brushed titanium version which is about 8g lighter and has a sleek look and quality feel. After almost 12 weeks of daily wear, the case had minimal to no scratches which is impressive but also expected at a higher price range. Three operational buttons enable tactile manipulation of the watch, but it also has touchscreen functionality that is responsive even in wet conditions, which is activated by unlocking the screen with any button. One design quirk is the thick internal black frame around the data screens, which shrinks the amount of surface area for displaying data and diminishes the overall aesthetic a bit. Another oddity is the absence of a traditional strap stay, which is replaced by a plug clasp that fits into the holes in the opposing strap to create a flush band. We experienced problems with this during our testing because the slightest bump or removal of a layer mid run would undo the plug and our strap would flap. 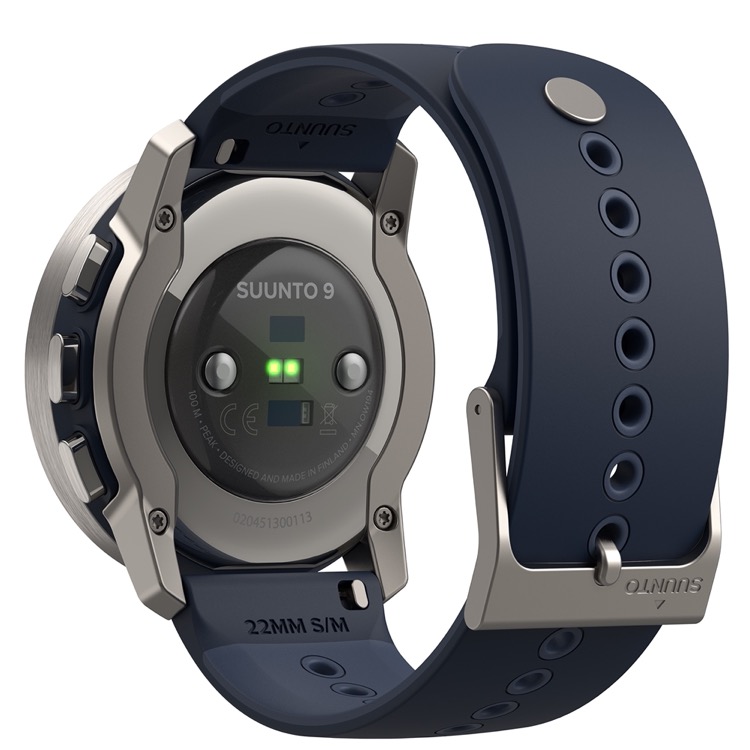 HR and SaO2 monitors on wrist

The Peak 9 also has a built-in optical heart rate sensor that we found to be quite accurate at rest and a little less so while running. Also located on the rear of the watch is an SP02 sensor (pulse oximeter). Different from other brands, this sensor only gives a reading when prompted; there is no 24-hour monitoring and it’s not available during activity. Both of these limitations preserve battery life but limit the overall functionality. To be fair, none of the major GPS watch companies have developed accurate SP02 monitoring during activity just yet. While some use SP02 as a measure of sleep quality and overall well-being, manual measurements are really only useful for doing altitude spot checks.

Users of previous Suunto models will feel right at home with the user interface on the 9 Peak, as it’s virtually unchanged. One positive development is that since the launch of the Peak 9, Suunto has updated the software across their sports watch lineup down to the Suunto 5, which gives users consistency of operation across models, as well as adding features from higher priced models. This seems to be a popular trend in the industry that strengthens brand loyalty and increases the lifespan of existing products. 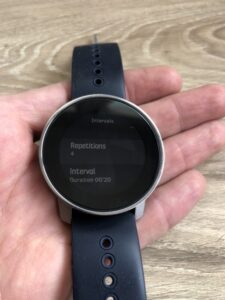 During our testing with the 9 Peak, our main disappointment with the watch was the occasional delay of the user interface both in and out of workout modes. Clicking up and down to get to workout modes or settings, the 9 Peak takes a few seconds at times to get where you’d like to go. We didn’t mind this so much in daily use but got frustrated during workouts, particularly when doing interval training on the fly. With the 9 Peak, the lap screen (think mile split screen) pops up on the face for about 10 seconds after the lap button is pressed and makes short intervals almost impossible to time correctly. We looked through the instructions and their app for a custom screen to display current lap time, but never adequately resolved this issue. For structured intervals that you plan in advance of your run, Suunto has a robust interval option in their sport mode, but this needs to be pre-programmed before the activity and cannot be altered once the workout is started. Somewhat frustratingly, pre-programmed intervals must all be the same, for example: 4×2 min hard/2 min rest. Intervals such as 5/4/3/2/1 with 2 min rest in between are not programmable. 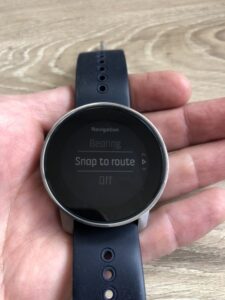 A highly promoted feature of the Peak 9 is the new “snap to route” function. The user creates a route or downloads a GPX file onto the device, then selects it before the activity is started. An option is given to snap to route and once running, the GPS track will not vary from the predetermined route, up to a point. This is clever on Suunto’s part. Snap to route essentially makes most GPS recorded activities flawless. The thinking behind this feature is to add GPS reliability in areas and modes where traditionally GPS signals have struggled – such as in major cities and dense forests. This addition seems to be geared for folks running major city marathons and races who rely on their data to be accurate when the signal is weak however, for trail runners that can be tricky. For snap to route to be effective, the route plotting itself must be accurate, something that is much harder to do on trails versus roads. During our testing we found this feature to be less useful than anticipated, especially as most of our runs are random and not pre-planned. On race day, with a well-marked course, we could see this being a useful feature. 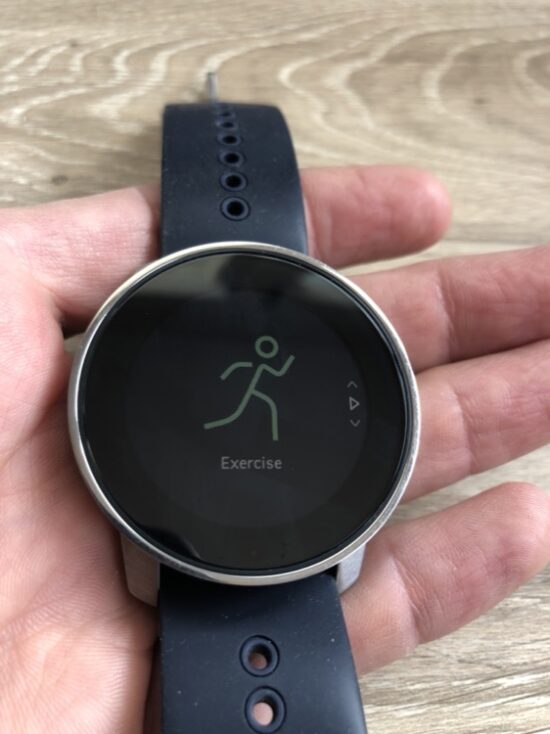 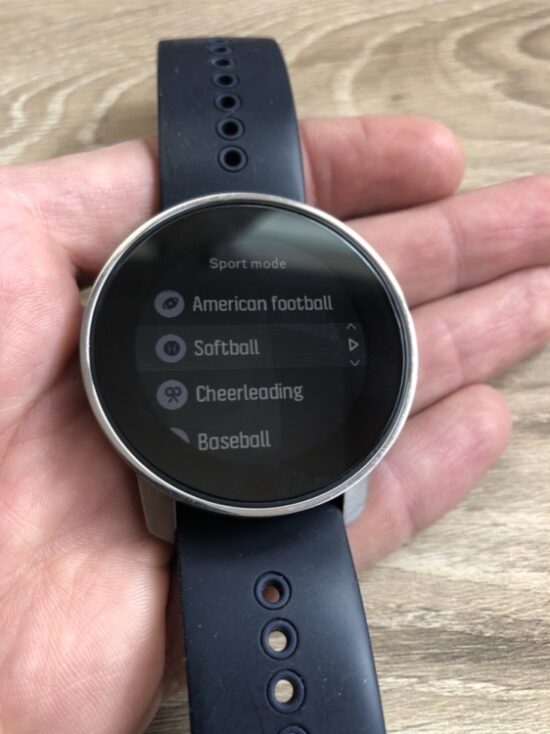 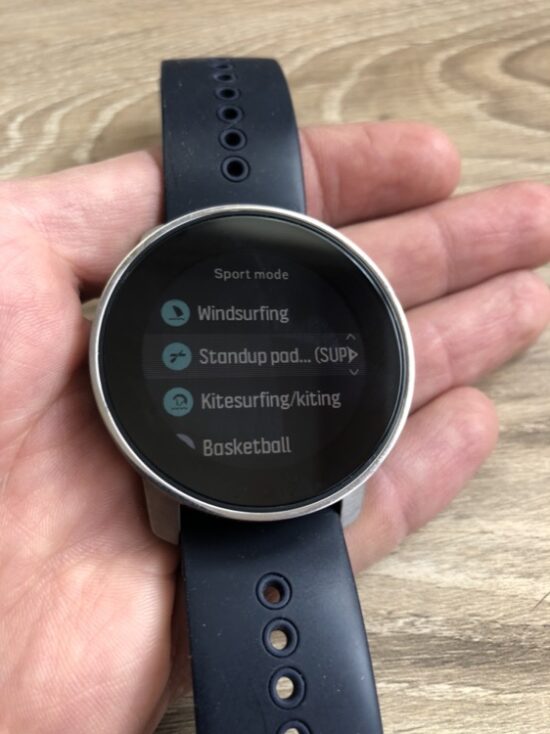 With 80 workout modes available, the Peak 9 does have something for everyone and we enjoyed scrolling through and using the various pre-set modes but again, customization is not allowed. There also isn’t a default trail running mode, so this was a setting we had to create from scratch on the app. For a device that is heavily marketed toward trail runners, this is a bit of an annoyance, particularly as other sports watches have increased their focus on the particular dynamics of trail running in recent years.

The Suunto app is clean and well organized, with their landing page housing a flurry of information from daily steps down to sleep performance and weekly time spent exercising.

While this review is of the Peak 9 itself, so much of a watch’s performance is dependent on its ability to translate its data onto a consistent and well thought out application. Suunto has revamped their platform recently and we liked the data-heavy optics and menus baked inside. A major plus in the Suunto app camp is the ability to create intricate routes, both on road and trail, and save them directly onto the watch. These GPX files can then be shared to other devices if needed. 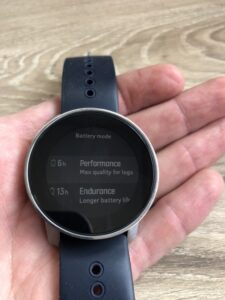 During our testing, one of the features that we liked the most was how quickly the battery on the 9 Peak charged. Even when placed on the charger for a few minutes, the watch was able to get a sufficient charge for a run. When we bottomed out the battery to 0%, the watch was able to get to 100% in a little less than an hour. The battery on the 9 Peak features an intelligent reminder when your charge is getting low, prompting the user to change modes. The four main battery modes are Performance, Endurance, Ultra and Tour. The standard mode, Performance, is auto-selected for most runs when the battery level is high however, when longer runs or activities are needed, then another mode can be selected. It’s important to note here that the GPS pings are 1 second apart on Performance mode and 1 hour apart on Tour mode — hence the 170h battery life.

Basic Summary: The 9 Peak is the next generation GPS watch from Suunto and differs from their other models with a slimmer profile, more aesthetic design and recent software updates. We put the 9 Peak to the test with long training weeks, structured workouts and everyday functional wear.

The Suunto 9 Peak is available at www.suunto.com/en-us/