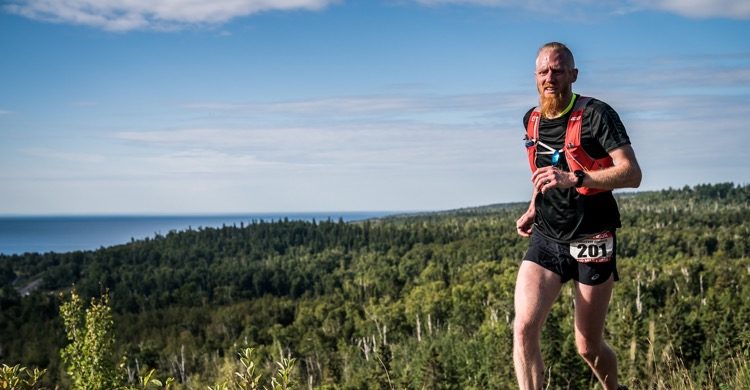 “Hey, Tim! You’re on 8:10 pace at mile 95!” We were running down Britton Peak, heading for Oberg, the last aid station before the ﬁnal grueling stretch of the Superior 100 on Minnesota’s North Shore. “It feels good,” Tim Owata said over his shoulder, as we continued to jump over the large rocks.

Branches and roots crunched under our feet, and bright leaves ﬂashed by. Feeling as though I was on a roller coaster, I remembered my 91-year-old father’s tales of riding the iconic Coney Island roller coaster in the 1930s. Other hundred-milers and ﬁfty-mile runners looked at us with puzzled faces as we zipped past. “What’s up with that guy?” I could hear them asking. “He’s happy,” I offered.

There was a surpassing amount of unbridled happiness on the trail that weekend, as runners from near and far descended on this scenic jewel along Lake Superior in pursuit of 100-mile, 50-mile or marathon glory.

My Friday began at Tettegouche Aid Station, captained by Peter and Maura Schnorbach. The leaders swept through–Neal Collick and Mallory Richard—who would both go on to smash previous records in their stunning victories, were notable for their intense focus, but also their genuine joy.

Tim came in a bit hot from the sun but full of hope and purpose. Such a contrast from last year, when he had battled so many challenges early on. I gave him a hug and told him I planned to see him the following morning for our party at mile 85.

I arrived at Temperance AS to start my pacing shift with Tim. He’d had a great run with Dan, his ﬁrst pacer, and, according to his next pacer Alli, “We had a little break, but now we’re great!”

“Ready to go, Timmy?” I asked cheerfully. “I feel amazing!” he said, and took off.

Over the rocks and through the woods fractured by yellow sunlight, we picked up speed like a downtown train. I tripped after Carlton Peak and broke my ﬁnger but didn’t worry about it. “I think I’m negative splitting this,” Tim said. “What happened?” I asked. “Well, I was in a bad place, and Robyn Reed told me to eat a ton, so I did, and then I just reset my head.”

And just like that, we were at Oberg AS, run by my dear friend Kurt Decker and the ﬁne folks of TC Running Company. There, Tim met his love Elena, who would accompany him to the ﬁnish. “Drink that Coke,” I advised her as we did the handoff. “Someone’s feeling chipper.”

At the golden hour I met Tim’s stellar crew, John and Kelly, at the edge of the road. It is here, at this still point where the last vestiges of Superior Hiking Trail dirt meet the long asphalt drive around Caribou Highlands Lodge, that the runners ﬁnally know—in every ﬁber of their exhausted bodies—that they will complete this thing, and the end is waiting for them like an unwrapped gift.

“Nice comeback,” I said, as I watched Tim cross the line. Standing a bit apart from the crowds, I looked on as he and all of the other ﬁnishers stepped up to claim what was theirs: the star, the medal, the moment and the day.