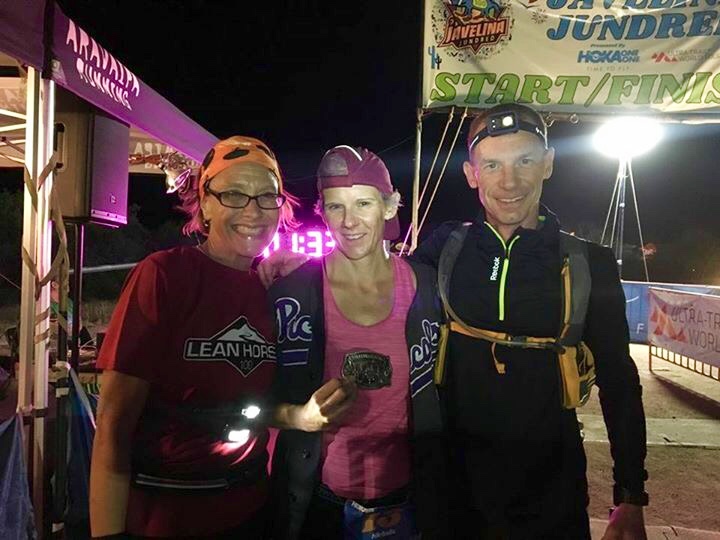 Stacey (center) with her crew at Javelina Jundred. Photo courtesy of Stacey Buckley.

Imagine a high school track star who dared not run distances longer than 800 meters, but would eventually grow up to find herself finishing (and winning) 50 and 100-milers. That’s exactly what Nebraskan Stacey Buckley is doing, and she’s just getting started.

After a hiatus from running in high school, Stacey began running again after college. Friends in Omaha helped her reach the finish line of her first half marathon, and then (six years later) her first marathon. She admits, “With no clue about the qualifying standards for the Boston Marathon, I finished Virginia Beach in 3:13 and ran Boston the following year in 3:14.” She says she was talked into running her first marathon, which is how she met Mike Christensen, a local Omaha runner who eventually introduced Stacey to the trails.

When asked about her recent third place finish at this year’s Javelina Jundred in 19:32, Stacey attributes much of her success to those around her, “My friends and family are another source of strength for me. My husband is my rock and even though he isn’t excited about me ‘putting myself through’ these races, he understands my passion. Secondly, I could not have asked for a better crew/pace team for Javelina.”

Javelina wasn’t Stacey’s first 100-miler, and it also wasn’t her first time finishing in the top three. But her previous finish was just last year at the 2016 Hawk Hundred in Lawrence, Kansas. You see, between the time Stacey was introduced to trail running and her first hundred, she and her husband welcomed twin girls in 2013. By 2015, Stacey was back running her first 12-hour race and then a 50-miler at Voyageur in Minnesota, just a few weeks later. In her very first attempt at the 100-mile distance in Kansas, Stacey was the second female to cross the finish line in 20:01.

As a mother of young twins and a full-time Physical Therapist Assistant, Stacey still manages to train for ultras on the weekends.  “These runs are usually early in the mornings with great friends who understand that I need to be home in time to be mommy and wife. I also love pacing my friends at their races, because I gain so much knowledge and inspiration from them.” And for those who think Nebraska is flat, Stacey reassured me that it definitely has trails with significant climbing. Some of her favorites are at Camp Calvin Crest in Fremont, and Hitchcock Nature Center (just across the state line in Iowa).

So what does Stacey have planned for the upcoming year? Giving back to her support team is a top priority as she will be pacing and crewing friends at different 100-milers, along with plans to take her family back to Boston for the marathon. And while life can get hectic with raising kids and balancing a career, Stacey still has her sights set on the future with a possible lottery pick at Western States. Until then, she says, “The trails are my retreat and what I call, “Mommy Time.”