After college, Brett Farrell bought a one-way ticket to New Zealand, seeking a year of adventure and a change of scenery with a psychology degree finally in his pocket. Once that year was up, he moved back home to New York and sought a different outlook. Farrell relocated to the west coast and in 2009, moved to Portland, Oregon, and got a job at local running store. 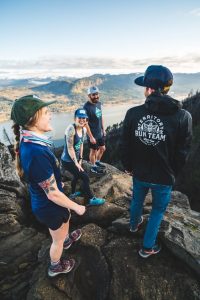 He couldn’t help but pay attention to the stories that brands were telling. Often competitive, painful and hard messages, running brands seemed to be missing the beauty of being outdoors and the residual good feelings that running generated. That’s when Farrell decided to design a t-shirt. Just five years ago last March, he printed and sold 200 of the shirts online. A simple crest that said, “Territory Run Co.” surrounded by trees, mountains and a trail. It filled a niche by providing runners with a shirt that wasn’t advertising race sponsors or emblazoned with a race name – it was purely symbolic of the sport of trail running. That May, he designed a second shirt and then, a hat in June. One by one, he launched a variety of products under Territory Run Co. – a brand of lifestyle gear that was being swiped up by runners who wanted thoughtful designs in casual clothing that reflected a sport they loved.

Five years later, Farrell has grown the product line to include t-shirts, sweatshirts, hats, jackets and limited release products such as packs, arm sleeves and printed art. Many of the designs feature names of trails or running locations around the Pacific Northwest, including Forest Park or Issaquah, Washington – places where runners often converge when looking to spend a few hours running under a canopy of trees or along a network of single-track trails. He was able to quit his 9-5 job and build the company with part-time employees that help with social media, customer service and warehousing.

Territory Run Co. has also added ambassadors (they’re called Runners of the Wild), Sunrise Run groups in cities across the country, a new podcast and more than just beautiful photos on the website (territoryrun.co). It’s no surprise, given Farrell’s background in psychology and running, that he’s created a business which not only sells clothing, but promotes a lifestyle that revolves around the beauty of running using films, photography and stories about trail runners from all over the country.

I’m a firm believer in the Territory Run Co. they practice what they preach and stand behind their products, great customer service. Please support the company.