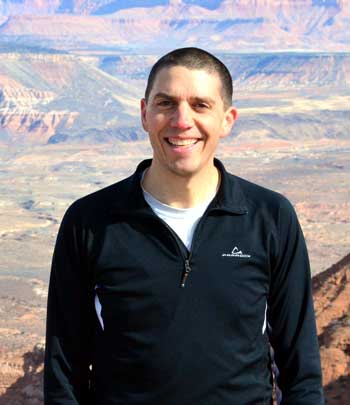 I circled the high school track, loop after loop, hour after hour, mile after mile. For 100 miles, to be exact. It was July in southern Utah, where summer temperatures feel like you’re standing on the sun. The high was 107 degrees. I tried to think of some profound response when people asked why I was running 100 miles around a track in July. The best I could come up with was “Well, it seemed like a unique challenge. And I had some glazed donuts I needed to burn off.”

This wasn’t my first or last solo 100 miler. I ran a solo 100 in the high mountains where the air was thin and crisp. I ran a solo 100 through lonely desert trails where my only running companions were lizards. Maybe it’s low glycogen, maybe paranoia, maybe sleep deprivation, but while running alone during 100s I have a mild fear of coming across a mountain lion. I’m convinced that I can keep the imaginary mountain lions at bay by talking out loud to them and reminding them that I’m not delicious. I’m the opposite of delicious. Like cauliflower.

A memorable solo 100 was run through urban city streets where gas stations became my aid stations. The typical ultra aid station food was replaced with Slurpees and Twinkies. This run became decidedly less solo when a new friend latched on for a few miles with me. I learned that he was the band teacher at a nearby middle school. A few hours later as I neared the end of the run I passed by his school… and was met by the entire school band playing a rousing rendition of Queen’s “Another One Bites The Dust” as I ran past.

Cory taking a break at his “solo track 100 miler”

My most recent solo 100 was in October when I ran a quadruple St. George Marathon. I began running the day before the race at the finish line. I ran up to the start line, then back down the course to the finish, then back up the course, making it to the starting line in time to begin my last marathon with the official race. The previous solo runs had been unsupported. But on the quadruple marathon run, my sweet wife crewed for the first 50 miles. Her primary job description was:

1) Make sure I keep drinking, and

2) Don’t let me get in the car if/when I start crying and begging for a ride home.

It goes without saying that the planning and preparation stages for a solo 100 are critical. Because I expected to complete my runs without crew or support, my car was usually my aid station. I had a cooler stocked with water, soda and snacks. I planned my routes to come back to my car every 15 to 20 miles to resupply. The beauty of a solo 100 is that your aid station always has what you want! For safety, let someone know your route, plans and timetable. I’ve come to learn that spouses appreciate an occasional call letting them know how you’re doing, and that you haven’t become a mountain lion buffet.

There is no extrinsic reward for running a solo 100. No finish line to cross. No cheers or congratulations from a crowd. No belt buckle to signify your determination and perseverance. Nothing. You get in your car and drive home. But, as anyone who has run 100 miles can attest, the extrinsic rewards for that achievement pale in comparison to the intrinsic reward of knowing you pushed your body to the limit. You didn’t give up, even when you really really wanted to. You achieved something amazing. Something remarkable and difficult and incredible. Even though there is no belt buckle, that internal satisfaction is enough. It’s more than enough.

Awesome!! Multiple awesomes!!! What a great read and inspiration.

I have a similar challenge planned for next weekend – 15 x my regular 11km loop, my garage will be my aid station with everything I want!

Why? Just because, and because I can…… OK, it always goes a little deeper than that, but why the hell not!!