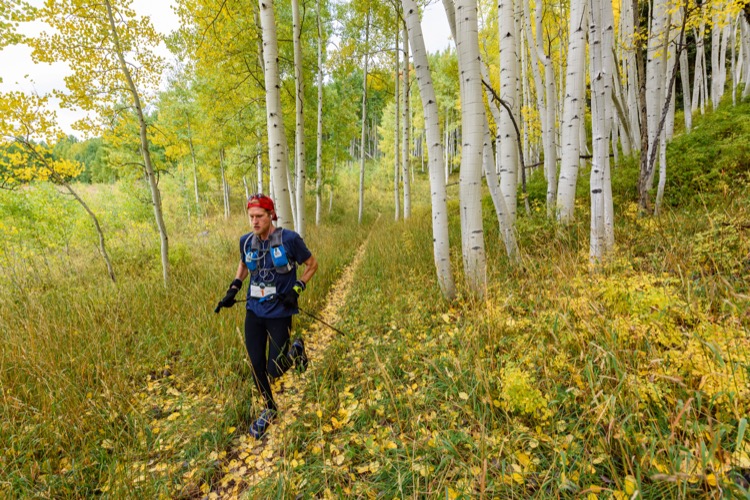 By Erin Fitzgerald and Megan Finnesy

In junior high school, I participated in a dance-a-thon to raise money for Autism. Despite tiring muscles and the constant threat of sweat stinging my eyes, I danced for 24 hours straight. Perhaps it was an early sign of my calling as an ultrarunner with a passion for giving back.

I’ve been participating in fundraising efforts ever since, so it seems natural the Silverton Double Dirty 30 turned into a “run-a thon,” although runners had to fend off much more than tired muscles and dripping sweat if they were to cross the finish line.

The inaugural Silverton Double Dirty 30 on September 24 in the San Juan Mountains challenged runners with over 11,000 feet of climbing, but the reward was always grand – high alpine trails, golden foliage and over 50 miles of single-track trails were just a few of the highlights that made this race special. Acquiring the permits for this race required four years and obtaining the assistance of the local congressman.

Thirty-three racers toed the line, spirits undaunted by the first snowstorm of the season that dumped 3 to 8 inches on the course, rising creek crossings and below freezing temperatures during the night. The high-altitude elements tested runners’ fortitude, stretched their comfort levels and in the end, showed them their months of training paid dividends.

The entire course was laced with golden medallions popping out from underneath a fresh layer of snow. This course teases your every sense as it meanders down the Animas River Gorge and climbs to 12,500 feet over Rolling Pass. Majestic views of 12,989-foot Engineer Mountain towers in the distance as runners circumnavigated this giant. It’s hard to choose a favorite part of the course, as any part of it could be turned into a screensaver picture. However, the view of Engineer Mountain holds a special memory for me.

Two years ago, I was a volunteer for Big Brothers Big Sisters and took Samantha, my “little sister,” on an adventure we’ll both never forget. Together we navigated up the challenging Engineer Mountain and were treated to 360-degree views of stunning visual prominence. It was her first mountain ascent and no doubt forever changed her idea of what’s possible with determination and courage. The experience was part of the motivation for creating a race in this area to benefit Big Brothers Big Sisters (BBBS) of SW Colorado.

Although racers were not required to raise money, they were encouraged and supported, and top fundraisers received generous prize packages from sponsors. Over $13,000 was raised for BBBS, an organization that fills an important gap in our communities by pairing kids in need with positive and supportive role models.

Ivy Lefabvre and David Wiskowski in the meadow below Molas Pass. Ivy won the women’s Prime being the first woman to reach aid 1 at 11,000 foot Molas Pass who finished the race. Photo: Howie Stern

While the Double Dirty 30 no doubt inspired and challenged the racers, the miles run will continue to make a difference for years to come. For many, the reward came when they crossed the finish line, but the miles they fought hard for will have lasting impact for someone they’ll probably never meet.