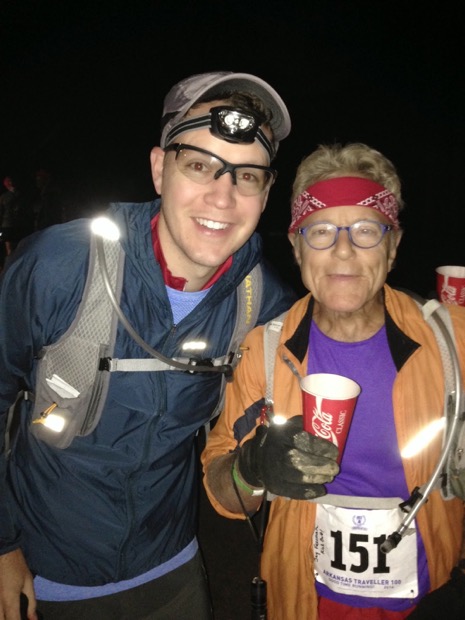 “Welcome to the dark side of the running world!” my uncle Jay said to me. He was only partly joking, because I did indulge in what many (including those involved) would consider the “dark side of the running world,” running 48 miles of the Arkansas Traveller 100 in the Ouachita National Forest as my uncle’s pacer. It’s both a beautiful tour of the countryside and a torturous trip to the edge of human endurance.

Starting in the dark at 6 a.m., around 150 runners gathered on a lonely stretch of highway and without any fanfare took off, quickly turning onto a dirt road that would lead them onto the mountain trails that the rest of the race follows.

As Jay’s pacer for the second half of the race, I met him at the aid station at 7:30 p.m. at mile 52.1, where I got my first lesson in running with a flashlight. The rest of the night is somewhat of a blur. We ran along dirt roads, gravel trails and through what seemed like just straight mountainside. We hiked up mountains and jogged through plateaus and downward slopes. We talked about a range of topics and sometimes we didn’t talk at all for long stretches of time, the only sounds in the woods the wind or our feet on a branch or rock.

The aid stations – sprinkled throughout the course – started to seem more and more like part of some kind of dream sequence, suddenly appearing out of the darkness, a barrage of noise and light and warmth staffed with smiling volunteers making sure we were still stable (and sane) enough to continue.

I had the continuous feeling of “hitting the wall,” a feeling of utter despair and disappointment, when your brain is telling you that you should quit because there’s nothing left. But you have to keep going. When it’s happening it’s one of the worst feelings there is, but when it’s over it’s even more incredible to know that you didn’t stop, even when that most sensible of voices in your head was pleading with you to do so. In other words, you realize that you’re actually a little insane.

I don’t know that I’ve felt that relieved to see the end of a race in my life. Afterwards, I felt like my mind had disassociated from my body. It was a surreal experience and in a cab on the way home the driver asked me what I did that weekend. I told him.

“What do they give someone who runs 100 miles?” he asked.

And that’s also what makes a “normal” marathon no longer seem so crazy.