Many comparisons have been made to modern-day ultrarunners and the Pioneers who crossed the continent in covered wagons back in the 1840s and 1850s. The Pioneers risked everything and took on a massively arduous 2,000-mile trek, often for a dream or nebulous “better life” out west. As with ultrarunners, a common question from onlookers was: “why?” Were the Pioneers escaping bad circumstances and desperate lives? (And for ultrarunners: What are you running from?)

Were the Pioneers seeking the good life in Oregon’s idealized fertile valleys? (What are you running to?)

Or were the nuggets of gold out west really that alluring? (Is it really worth all the excessive training time, resources and suffering to achieve your racing goals?) 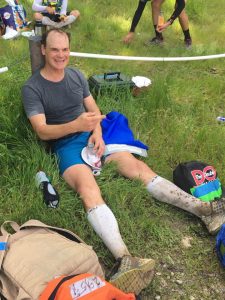 Karl swearing that he saw an elephant on the trail, midway through the grueling Lake Sonoma 50-miler in April 2017. Photo: John Trent

Many of the pioneers were fleeing difficult circumstances, and many more were called to the idea of having a place of their own and living off the fat of the land. And human nature being what it is, there is nothing like the allure of finding free money in the form of yellow nuggets in the Sierra.

But at the crux of it, the Pioneer spirit was about experiencing life and chasing dreams in a most profound way, against all odds and despite significant costs. It was about ignoring conventional wisdom and living life. It was about chasing dreams. That sounds a lot like ultrarunning.

A uniquely American phrase that became popular back then to describe the Pioneer-fever was seeing the elephant. Look it up, and you will find something like: a person’s desire to abandon comforts and risk everything in pursuit of an exciting and enticing dream or ideal – driven by an inexplicable but euphoric drive, like a moth to flame.

In the Civil War, seeing the elephant came to describe a soldier’s experience of intense combat – and inevitable casualties. For the Pioneers and soldiers, seeing the elephant started with high hopes and excitement, but almost always ended with a heavy dose of chaos, mayhem, dashed dreams and often, death.

Fortunately, in our time, there is a small corner of the endurance sports world where a person can still see the elephant, but in a safer way. The build up and excitement at the starting line of an ultra is electric, but once the race gets going, suffering is assured. For an ultrarunner, that aspect of the elephant is usually just a pile of vomit, a gnarly blister or soul-crushing fatigue.

And by the time they reach the finish line, the ultrarunner has experienced life in an often-transformative way – and it may feel even better than a pot of gold.

I always wondered what “seeing the elephant” meant. It only took me 22 miles into my first 50K to see the elephant and he was one big son of a gun! I finished but that pachyderm followed me all the way.