I had hardly slept the night before the race, but when I woke up at 4:45 a.m., I felt as if I had taken six shots of espresso. This was my first attempt at running a 50-mile ultramarathon and the mental caffeine that was surging through my brain was urging me to get out the door. I had run a couple 50ks but the San Francisco 50 Mile Endurance Run was incomparable to anything I had raced before. By the time I had arrived it was around 6:20 a.m. and I immediately went to find my bib. What surprised me was when I signed in they gave me the fleece jacket that said “San Francisco 50 Mile Finisher” on it. I thought to myself, “Did they do this because they want me to feel like I have to earn this?” or was it, “first you get the jacket and then you have to earn the belt buckle?” Either way, I had to earn something and that’s all I could think about when I toed the starting line. 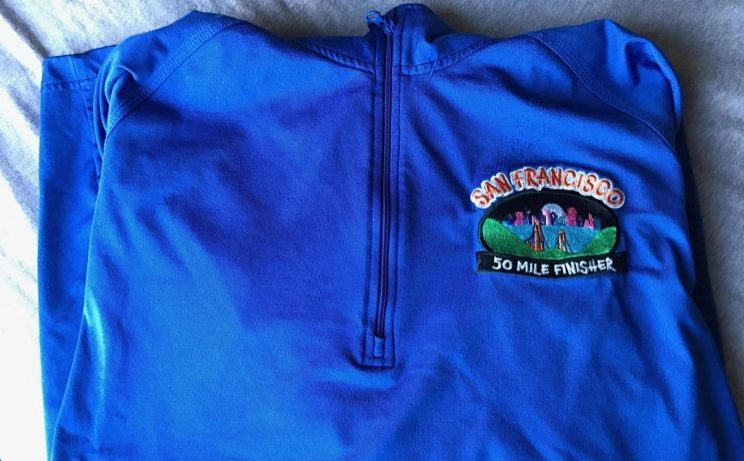 I thought I had trained pretty decently coming into this, but I was sorely – pun intended – mistaken. It started right on Rodeo Beach which was so pretty that morning with the heavy fog. The weather was supposed to be 72 and sunny – couldn’t have asked for more perfect conditions. The path took off on the shoulder of the highway and up a slight incline before gearing down into some trails. About a mile later we turned onto Conzelman Road that would take us to the first aid station about three and a half miles away. I passed that aid station without stopping. Like many of the other runners, I trusted I could make it to the next one without too much damage. Boy, was I wrong.

Around mile five, I was flying down a hill screaming a stupid saying my roommate and I had continuously kept repeating, “Totally technical!,” in regards to how intense these hills were. As if “totally technical” were said too many times akin to “Redrum,” I must have summoned a demon in the shape of a tree root or stone because I tripped and crashed into a bed of rocks. I remember seeing my roommate in front of me and as I fell I thought “God, this is really going to slow us up.” I slid a foot or two on the rocks and when I stood up something felt off. When I took a look at my right shoulder there was a giant gash and blood running down my arm, which revealed even more deep cuts. I had completely torn myself up and I had barely started the race!

“In ultrarunning, the pain is inevitable, but the suffering is optional.” —Al Bogenhuber

As I arrived at the Rodeo Valley aid station (eight miles), I immediately asked for some assistance from the volunteers. They were so responsive and caring about what had happened that it lifted my spirits for a bit. While they were cleaning me up I had to sit down due to the immense pain and swelling that was occurring. I almost passed out but with their help I was bandaged up and back on my feet in about ten minutes. My roommate waited for me the entire time and I kept telling him to go on if he wanted but he always replied, “Dude, we literally have all day.” For some reason that calmed me down but also slightly worried me.

My roommate went ahead of me around mile 15 which was nice because my shoulder was killing me and I was seriously slowing us down. Not even a moment later, I started getting cramps in my calves and began to wonder if I was going to finish this. I walked to the next aid station at Muir Beach where I drank a ton of water, ate so much food, had more bandages applied, and a kind park ranger wrapped me up in an elastic bandage. He also gave me a sticker after I asked for one, but he said I had to ask him a question about the park first. I could only think of “Are there any bears here?” So lame…

“A race is just a race, but a friend who paces you is a friend for a life.” —Joseph Franko

Shortly after the aid station near Heather Cut-off I met two wonderful women who I ran with for more than 25 miles. Peggy and Yvonne were essentially my saviors for the hardest part of the race. We hustled through Heather, climbed Cardiac, cruised down Dipsea where we saw whales, and climbed a ten foot wooden ladder while maintaining a solid pace towards the turnaround at mile 27. Those two lovely ladies helped me stay positive the entire time I was with them by sharing stories of mind-blowing adventures. They helped the time pass by quickly and took my mind off my shoulder. 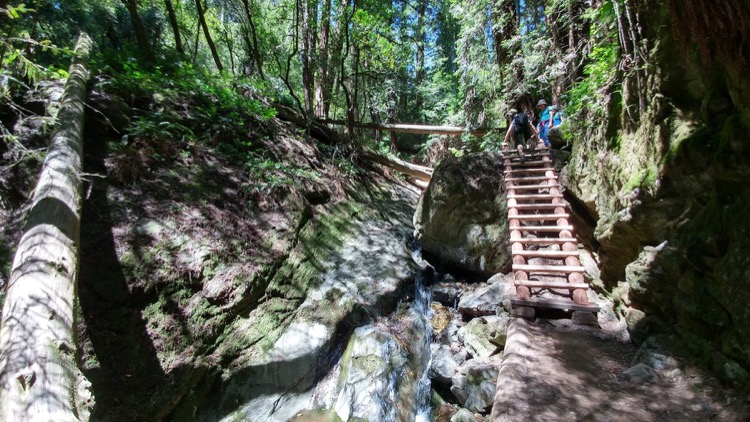 Wooden ladder, hard to climb down with a busted shoulder. 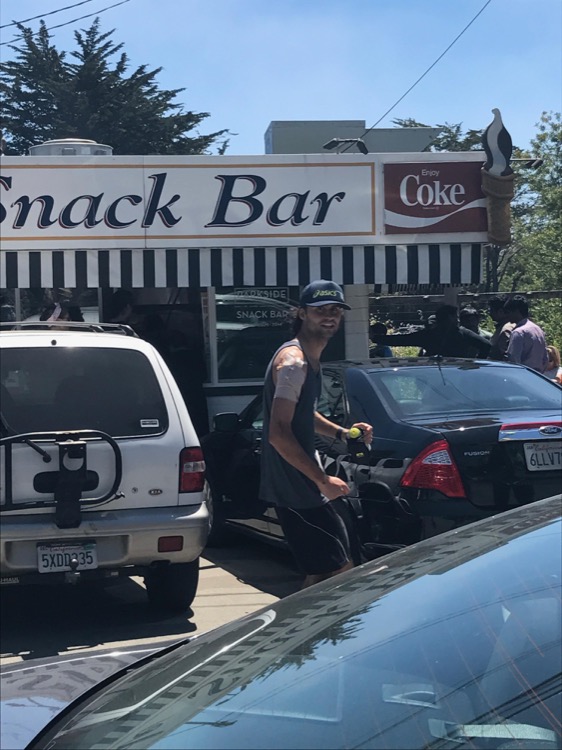 As we popped out of Pirate’s Cove for the last time (mile 40) I had briefly seen my roommate, but only because the angle of where I was at in relationship to this hill he was running up, he was about 4 miles ahead of me. It gave me some inspiration and hope knowing he hadn’t quit yet so I made it my mission to not quit either. Fast-forward a mile later and I started to have serious stomach issues. I think it was due to switching up my diet a couple aid stations back because I was starting to bloat from all the salt I was intaking so I switched to sugars. The bloating caused a lot of pain in my shoulder and hands because it was stretching out the cuts and sliding salt into them from my sweat. It was starting to become miserable.

I tried catching up to Peggy and Yvonne because I wanted to finish the race with them since they had been such wonderful company, but I didn’t see them until mile 48 when they started to enter the final stretch of the race. The remaining nine miles without anyone was probably the toughest time I have ever had physically and mentally. I made it, barely, to mile 42.3 where I was welcomed by a lone aid staffer and a woman who I had seen running earlier, so I knew people were definitely starting to finish. I stayed for a bit longer than expected at that aid station because I started to get cold as the sun began to set. I left with a small flashlight that the other runner had given to me and asked for the time. “6:30. You have about an hour and thirty before it gets dark.” Shit.

“It’s an epic tale of determination, the love of competition, and a willingness to endure. It’s the trifecta of sporting in America.” —Tyler Hemingson

Someone I know from a run club was telling me that 50-mile races don’t really start until mile 40. I had no idea what that meant at the time, but as I was leaving that last station, I had 4.6 miles to the next one. This was not going to be fun. The trail went up several hills, and at this point my ankles were burning, my shoulder was sagging extremely low, I was sunburned from being in a tank top for 12 hours, and I ran out of water a mile after I left the aid station. I believe this is what was meant when they told me 50-mile races don’t start until mile 40. When I finally arrived at the last aid station (mile 46.3) I was so cold because the sun had set and the wind had picked up off the ocean. I sat in the aid station with a parka that a family had given me and drank some water.

The final part of the race felt like a blur of confusion. I started accepting that I was going to finish, yet doubting if I would finish because my shoulder was starting to really cause some issues, and I had no idea where I was going because it was 8 p.m. at night. Where was the finish line?! The last three miles were a 1-mile uphill loop that came back towards the same aid station I sported the parka at and around the bend up another hill. It came around the Marin Welcome Center and popped out onto the street we had started on. I wrapped around the hill and came down a flat street where I could barely make out the silhouette of my girlfriend on the dark horizon. She cheered me on and helped walk me the last .2 mile to the finish line where I instantly started crying from relief that it was over. That feeling will never be forgotten. I received the belt buckle and looked at the jacket knowing I had earned it. 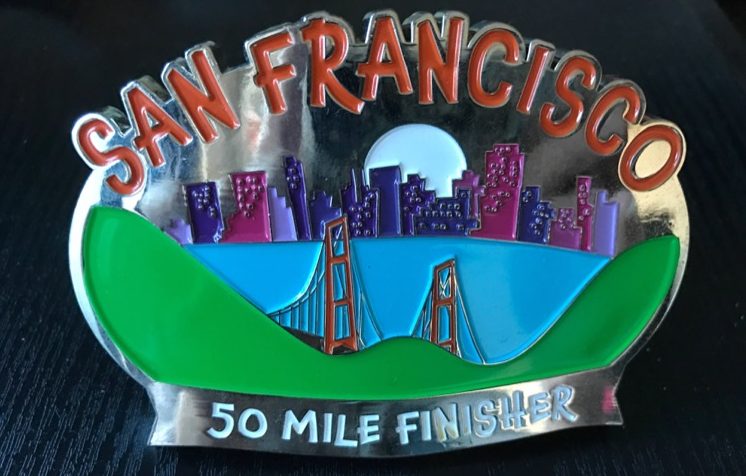 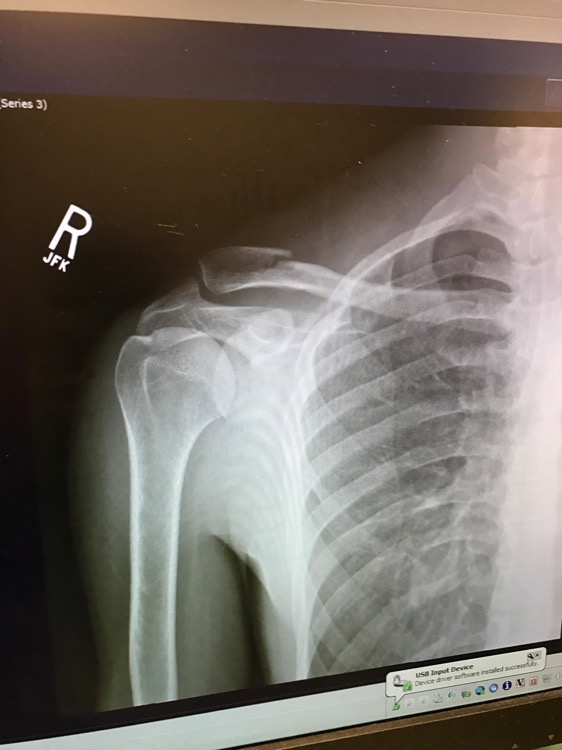 The damage – a broken clavicle.

Immediately after the race I went home to see the damage. It ended up being a lot worse than what anyone thought so we rushed off to the ER. When we got there I was booked into x-ray within ten minutes and after 12 x-rays of my shoulder, lungs and arm, they found out I had broken my clavicle. So for 46 miles I ran with a broken shoulder and had no idea. When I learned that, I knew that I had earned that belt buckle and jacket. This was by far the most humbling experience I have ever had. It was amazing to see that I could silence my mind and focus on other enjoyments enough to make it through a 50-mile race. I’m hoping for a fast recovery because I’ve got a lot more races coming up this year! Thank you Coastal Trail Runs for the amazing race, volunteers, and awards. As Coastal Trail Runs says, “Have fun out there!”