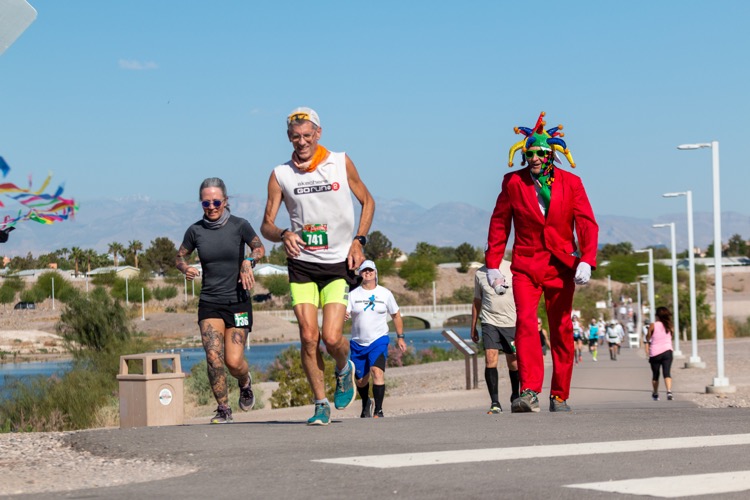 Running with The Jester

Have you been lucky enough to spend miles racing with “The Jester”? I recently completed my first 72-hour race and it became my first 200-miler, thanks to Ed Ettinghausen—the man inside the jester suit.

In early April, I went to the Beyond Limits Ultra (BLU) in Mountain Center, California, with a seemingly doable plan to run 200 miles, and then simply see how much farther I could go.

On day two after a night of restless sleep, Ed slid up next to me as I was feeling overwhelmed by the amount of time both ahead and behind me. We spent the next loop together (BLU is run on a two-mile loop course). I told him my goal of running 200 miles and he specifically laid out a plan for how to get there. He encouraged me to get some real sleep on night two, but then not to stop, even if that meant no sleep on night three, until I had reached my goal and hit 200 miles. We chatted and I enjoyed his easy-going, positive and driven nature. Then he took off. Ed has a great, steady run mixed with an astonishingly fast walk. Through the course of the race, I saw Ed moving along with countless runners in the field.

I asked him why and how he invests in so many people around him, all while in the middle of the pursuit of his own goals. It’s not just a superficial, potentially easily forgettable hello. I felt like he dug in and actively sought to understand me, while also sharing about himself. Ed hasn’t always been “The Jester.” He cycled through a few personas before this one stuck. He said he genuinely enjoys helping people reach their goals and sees it as an integral way to achieve his own accomplishments.

I started to really struggle on the third night. I was exhausted and my feet were in pain. I desperately wanted to stop and rest, but I kept thinking about all Ed had told me. I was vexed by the notion of so deliberately not taking his advice and ignoring his guidance, and I was afraid of letting him down. I kept thinking about the awards ceremony and how he would know I folded and wasn’t strong enough to keep pushing myself when I came in second or third.

I ran into Melissa Tawney, who was two laps away from finishing her first 100-miler. Melissa was so fun to talk to that I woke up and completely forgot about my pain. I was starting to see Ed’s point of how an investment in others can indeed be self-serving at the same time. 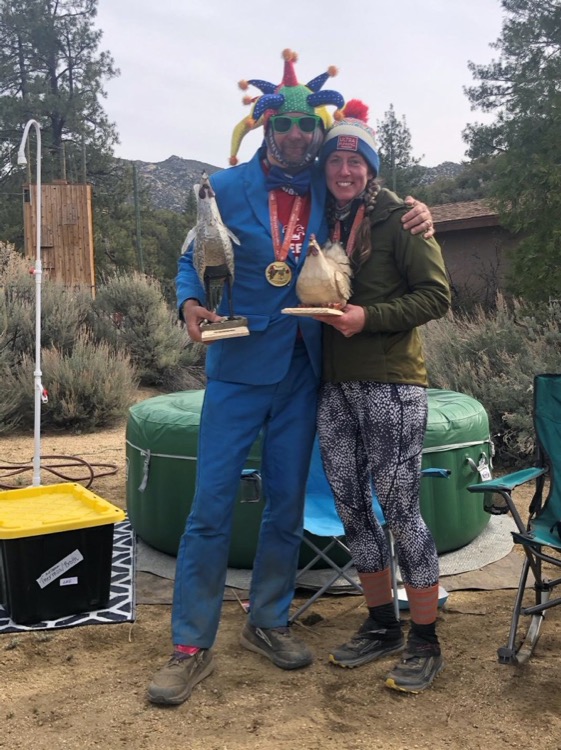 Ed and Stephanie with their awards from the Beyond Limits Ultra. Photo: Stephanie Barnes

Melissa finished running 100 miles, and I was at mile 190 and desperately wanted a break. I looked at Lee Robinson, one of BLU’s amazing race directors (along with Ken and Stephanie Rubeli), and started laying out how I didn’t know what to do, how I felt so tired and completely out of my element, and how I didn’t want to disappoint Ed. Lee listened intently. Then he looked at me and said, “But Ed is here waiting for you.” I could not believe it. I will remember that moment for the rest of my life.

There was Ed taking a power nap with his head down on a table. He popped up and away we went. A few laps in, I bumped into him falling asleep on my feet. I bent over and hesitated. Ed looked right at me and stated, “You need to decide how badly you want this. You need to decide if you want to win. And if you do, we keep moving.” I wanted it. I knew I did. I just hurt so much. I was allowing myself to be swallowed by the pain and exhaustion, but I straightened up and on we went.

It was not an easy night, but we made it to sunrise. At the end of the race, I had finished running 202 miles and Ed had completed 224 miles. He made the impossible possible. While I finished first female and third overall, Ed won the race.

Ed Ettinghausen is a true gem. He embodies the very soul of ultrarunning. He is the community we so often refer to as the reason we love this sport and why we keep coming back. I’m honored to have met him, thrilled to know him and I know I’m not the only one.

What a great story. Thank you!

Awesome. Honored now to have seen him in action at Merrill’s Mile in Georgia July3-6. Astonishing. Inspirational. Whisper “good work” or “nice job” each time he passed.

I spent about 5 laps with Ed at Nanny Goat and I can honestly say he helped me understand what aI needed to do to run my first 100. Ed is awesome!!

Stephanie, thank you so much for the kind words. It was such an honor and pleasure to run the last 6 loops with you. Those 12-miles we shared in the dark early hours of night three are some of my fondest memories of that race.

You already had within you everything you needed to complete over 200 miles, you just needed someone to help you see that. And thank you so much for the very helpful companionship and conversation on my final 12 miles of the race as well. What an inspiration you were for your children to witness their mom pushing ‘Beyond Limits’.

Looking forward to seeing what you do next.