Background
I live in Barbados, a small island in the eastern Caribbean, with my husband Teddy, and 12-year-old puppy Vusu (she’s from Fiji, hence the name). We live in a very hilly, undeveloped region on the east coast, epic surf, epic running. I’ve enjoyed training here. The hills are intense (between 18-29% grade) and the temperatures can be steamy, but it’s perfect for training.

When I first found out I was pregnant (about seven weeks along), I googled “running while pregnant” and was disappointed in the lack of information out there. There was information about Olympic athletes and information for recreational runners, but not much for someone who fell in between these two categories. Everything said if you were running before pregnancy you could keep running while pregnant. But what do you do if your baseline is 200 miles/week? Shouldn’t I be running less? How much less? The next 33 weeks were a learning experience. I thought I would share my story in the hopes that it may help women out there with similar questions.

Finding Out I Was Pregnant
I had a big race in July 2016 (Badwater) after which I had planned to cut my miles back and start trying to have a family. I had been off birth control for about a year, but due to my high weekly mileage (about 200 miles/week) my menstrual cycle was irregular. I did take about three weeks off or with low mileage after Badwater, but then the desire to race one more time started to nag at me. I wanted to try and qualify for the USA National 24 Hour team and signed up to run a 24-hour race in mid-November. I started increasing my mileage back up to 200 miles/week, complete with hill and speed workouts. In general I was feeling fine and happy with how my training was going. In September, I started coaching a woman, Lidia, for her first ultramarathon in April, running with her three days a week in addition to my regular mileage. By mid- to late-October I was starting to feel a little worn out. I was still getting my mileage in, and my workouts were still on pace, but my post-run recovery was much slower than it had been. I would be exhausted after morning workouts and found it hard to get going again for my afternoon runs. I just assumed I wasn’t getting enough sleep or something. There were other signs too:

I went for a 50-mile run the last weekend of October. The next Saturday morning I could barely get out of bed. “What’s wrong with me?!” Teddy had been convinced I was pregnant for a few weeks now. (The fact that my boobs had almost doubled in size should have been a dead giveaway I guess.) I didn’t think it was possible since I had been training so much, and my race was only two weeks away, so perhaps it was part denial too. Finally, that morning, I conceded and took an at-home pregnancy test. The instructions were in Spanish, but the results were clear: pregnant. So, I did what anyone else would do: I went to the store to buy another one just to make sure. Same result: pregnant (shocker). We booked the next available appointment with a recommended obstetrician and two weeks later the ultra sound showed I was about nine weeks pregnant.

The First Trimester
My first decision after finding out I was pregnant was to scratch from my race. To achieve my goals for that race I would need to push my body for 24 hours. This didn’t seem smart while pregnant. I was nervous that pushing my body physically might increase my chances of a miscarriage.

The first week after finding out I was pregnant I didn’t run, but not for the obvious reasons. I had a broken/ bruised tailbone from cliff jumping… Don’t ask! Since I was no longer training for anything I figured there was no point in running if I was in pain. This also coincided with a one week period when I felt like shit. I spent most of that week on the couch, but tried to stay active by swimming, aqua jogging and I started to expand my supplement routine to include squats, which I continued throughout my pregnancy.

After ten days off I started running again, very short and very slow, but my tailbone was feeling better and it felt great to be running again. It took about a week to slowly build up my mileage and finally settle on an average training schedule:

I spent most of my first trimester convinced I was going to have a miscarriage. This baby had already survived a 50-mile run and seven weeks of 200-mile training so I should have had a little more confidence, but I was still nervous. It was comforting, however, that running always felt good. Even when I felt nauseous beforehand and exhausted after, I never felt bad while running. Running was still my happy place.

The Second Trimester
I was really looking forward to not being nauseous all the time and not being worried about miscarriage all the time. The second trimester brought some relief from the former, but not the later. I was starting to feel much better and was still running 70-80 miles/week.  Things that worked for me:

At about week 22 I developed a sharp, stabbing pain in my IT band. I’ve always had tight IT bands that flare up every once in a while, but this felt different. I’m not sure if it had anything to do with my pregnancy (sciatic nerve?) or not, but it hurt. I took two very frustrating weeks off. This time off, however, did provide two major benefits:

After two weeks off from running I was able to start up again and within two more weeks was back at 70-80 miles/week (long run of 20-25 miles), yoga, swimming and aqua jogging, and supplemental strength exercises. Overall I was feeling good and still enjoyed running, but I was beginning to slow down.

Third Trimester
Lidia’s ultramarathon race was in April and I was due in June. Just as her training mileage and speed were peaking I was starting to slow down. I was experiencing a higher pulse rate, shortness of breath, lower back pain (particularly on steep downhills), and had to stop and pee all the time. My last 20+ mile run was at 28 weeks.

My 70-80 mile weeks ended in early April after my third “time off” from running during the pregnancy. I was in a car accident on April 6. My baby was fine, and for the most part I was fine too, but I did do something to my back. I’m sure two Advil twice a day would have solved my problem, but I didn’t want to take Advil while pregnant. I took ten days off from running and then started again with a different routine:

My runs were wicked slow, but I didn’t care. I was just happy to be out there still running. My back was feeling much better. I had no pain anywhere. I could complain about the worst heartburn ever for hours, but I’ll save you the sob story.

By the end of May I was feeling pretty tired and worn down. At 36 weeks I decided it was time to drop my mileage again:

I maintained this routine until I went into labor at 39 weeks. I had started to cut back on swimming and aqua jogging, to 2-3 days a week at weeks 38 and 39. This was due less to physical discomfort, but more that I was scared to leave the house for extended periods of time for fear I would go into labor.

Swimming felt really relaxing throughout my entire pregnancy. Running felt ok, but not great. I was getting strong Braxton Hicks contractions and felt a strong pressure against my cervix which made running uncomfortable at times, but it never really hurt, and I never wanted to stop. I would run first thing in the morning, as my productivity levels seemed to decay exponentially throughout the day. I would carry a water bottle (despite the fact I was never going more than six miles) and I was going incredibly slow (I mean, like really, impressively slow. I think I set a new standard).

Even at nine months I was still running in my old pre-pregnancy running clothes…for the most part. I had to invest in larger sports bras before I even knew I was pregnant. I’m typically a shorts-and-sports bra runner, but at some point early on I started getting self-conscious as my belly grew and conceded to wearing tank tops. Gradually I outgrew my limited stock of running tank tops. By the end of my pregnancy I had only four that would still cover my bump, so by the end of the week I was borrowing Teddy’s tank tops to run in. All my shorts still fit fine, as long as I wore them a little low – below the bump. At 22 weeks (mid January) I went to Boston to visit family for ten days and had to stuff myself into pre-pregnant winter running clothes. It actually wasn’t as bad as I expected – Lycra is a pretty forgiving material! That being said, if I had been living in a cold climate I would have needed to invest in some pregnancy running clothes. Instead, I had to commit to early-morning runs to avoid the scorching heat.

At the beginning of my 39th week I was considering cutting my daily mileage from 5-6 miles to 3-4. That Monday I had managed six miles but it was painfully slow. On Tuesday morning at 1:00 a.m. my water broke. At about the time I would have left for my run, Teddy and I were on our way to the hospital. Wyndsor West Allen was born at a healthy 6 pounds 12.5 ounces at 10:25 a.m. 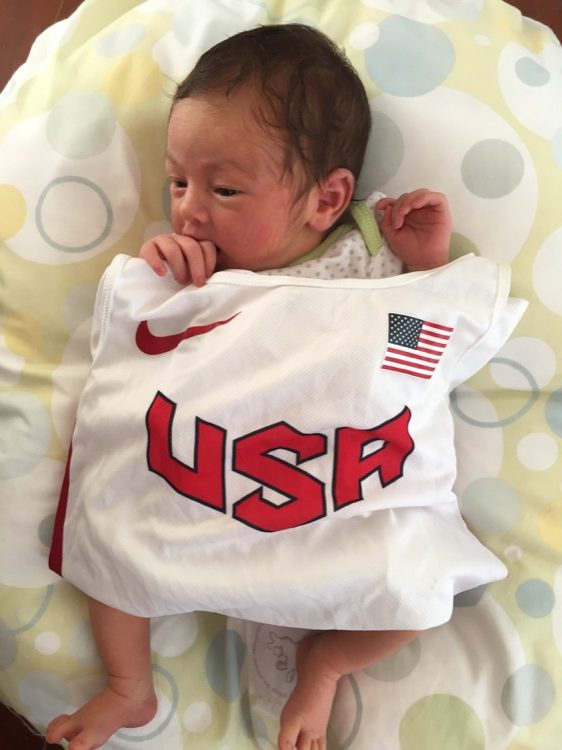 Final Thoughts
I got a lot of disapproving and confused looks running while pregnant. I even had people yelling at me from their car windows to stop. I got into the habit of taking a slightly longer detour back to my house to avoid passing a popular local hang out spot after receiving a cacophony of critical shouts to stop running. I strongly believe that continuous exercise throughout my pregnancy facilitated a short labor and delivery. The key was knowing when to cut back on certain activities (running), when to replace these with other, more accessible activities (swimming/aqua jogging), how to adjust my regular strength routine into something safer and more accessible to my pregnant body while maintaining a similar intensity level, and introducing new exercises (yoga) to keep my active body happy and moving.

Consistency in my training was as critical during this pregnancy as it is during my ultrarunning training regime. Exercising regularly enabled me to keep moving through all 39 weeks of pregnancy. I was able to maintain this consistency because I listened to my body and adapted my training program as necessary. Some days I could run, swim, aqua-jog, do supplements and yoga, other days I had to forgo the run or the swim, but I was always able to do something. I found that even on the days I didn’t feel like getting off the couch I always felt better after exercising.

My take-home message for women who hope to continue running while pregnant is go for it. You know what your body can handle and what it can’t. Be prepared to adapt as your pregnancy progresses. Assess what alternative cardio activities may be more accessible later in pregnancy and supplement some of those miles with this alternative. Continue stretching, strength and core training, just make sure you adjust to make these activities safe for pregnancy. You and your baby will both benefit from an active pregnancy.