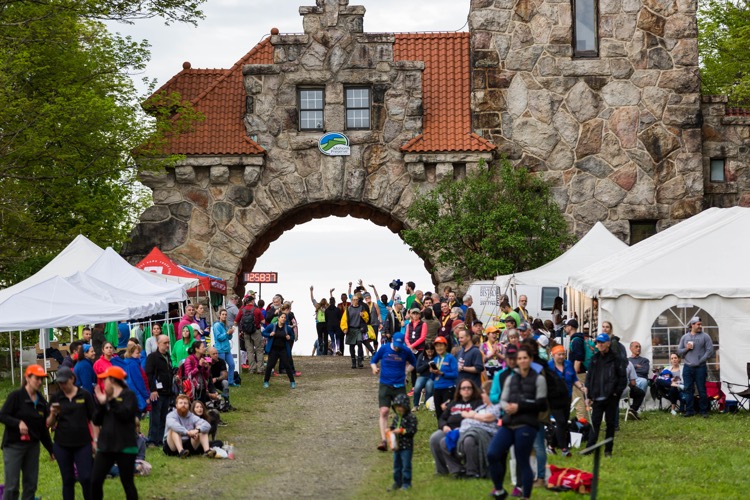 Running Scared at Rock The Ridge

I ran the first edition of Rock The Ridge (RTR) in 2013, and the race has grown into the largest annual fundraiser for the Mohonk Preserve, a private, non-profit land trust that maintains over 7,000 acres of open space in the Shawangunk Mountains in New York. Over the first five years, the race was a jointly managed event between a pair of local RDs and the Preserve. In 2019, the race had about 400 starters, plus another 50 or so relay teams, and the event went off (more or less) without a hitch.

Most of the climbing at RTR takes place in the first 50k, culminating at the highest point on the course, Castle Point, just past the 30-mile mark. I set a goal of 4:30 for the first 50k, hoping that would give me chance to finish strong over the mostly downhill and flat, final 20 miles. I knew seven hours would be somewhere near the front. Despite being one of the largest 50-mile races in the country, RTR is not known for particularly deep fields, as it caters specifically to mid- and rear-pack runners. Ben Nephew, a three-time winner of the race, would not be racing, but young speedster Etan Levavi, who had come from behind to upset Ben last year in a sprint finish, was back to defend his title.

After a flat opening mile, the race climbs about 900 feet over the next three miles, and I ran as easily as possible among the leaders, cresting the hill, just about four miles in 36:05. This was almost 5 minutes slower than I had been at the same point with Ben in 2013, when I crashed and struggled to a 7:29 finish. It was a bit alarming to be so much slower, but it was very early and I focused on keeping the pace as slow and easy. Over the next several miles I was passed by a slew of runners including Etan, who opened up a small but substantial lead. Don’t panic, I repeated, we’re not racing for a while yet. 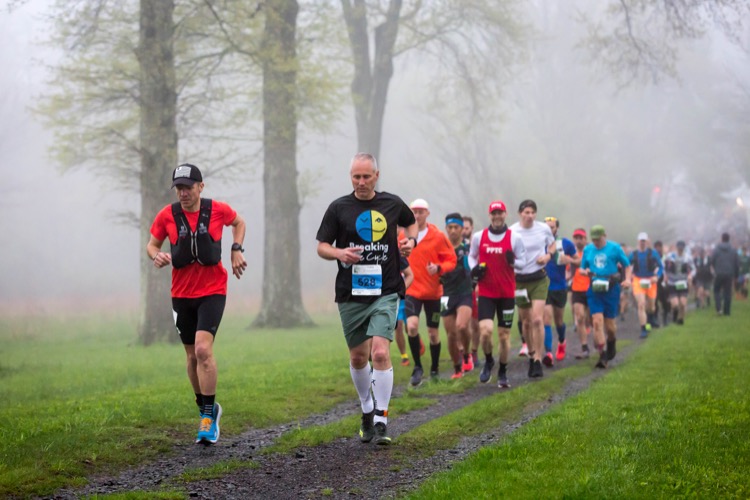 Runners emerge from the mist at the start of Rock The Ridge. Photo: Kate Schoonmaker

The course continues to climb over 1,000 feet, much of it exposed to the sun with the majority at a runnable grade. I knew from the first half of the race that I was the stronger climber and the weaker descender. My pacing to this point had been ideal—at just about 3:25 for 24.6 miles, I was almost exactly on target for a seven-hour finish. If I was going to have any chance at the win, I needed a gap at the top of this climb—but I couldn’t sacrifice the last twenty miles of the race to get it. I’d have to walk the fine line of pushing the climb without redlining and see where it got me.

I kept a steady tempo and effort throughout, getting some early separation at Awosting Falls and stretching out the lead as we climbed higher. I caught a glimpse of Etan at one point on a switchback, maybe a mile from the top, and estimated the gap at about thirty seconds. I crested the hill and took a brief glance back. Nobody there. OK, time to run downhill. Steady and relaxed, but keep a nice tempo and don’t let up.

My energy was flagging a bit as I pulled into the penultimate aid station at Rhododendron Bridge, 42 miles or so, and not moving quite so smoothly now. Banana, Coke, GU Chomp. I glanced back as I was leaving the aid station: Etan is 30 seconds back.

Well, I thought, that’s it. You gave it a good effort, and you’re still feeling OK, but you haven’t been able to shake him, and you know how well he can close. I jogged out of the aid station, trying to recapture the rhythm as the second-place relay team ran by. I really had to pee, but didn’t want to stop until Etan passed me, which I figured would be any minute now.

Except, it wasn’t. After about four or five minutes, I realized I felt basically fine and he hadn’t gone by. I looked over my shoulder and couldn’t see him. Huh, that’s weird. Might as well start moving again. The relay guy wasn’t that far ahead, and I focused on trying to peg the gap and picked up the tempo a little bit. We reached the bottom of the final short climb up Kleine Kill Carriageway and still no Etan, as I moved back in front of the relay runner. The climb made my legs burn this time, but this was the last piece. Switchback at the top of the hill and I could see Etan coming up behind, but I had a good minute at this point. A minute or more with less than four miles to go. I just had to make it hard for him. 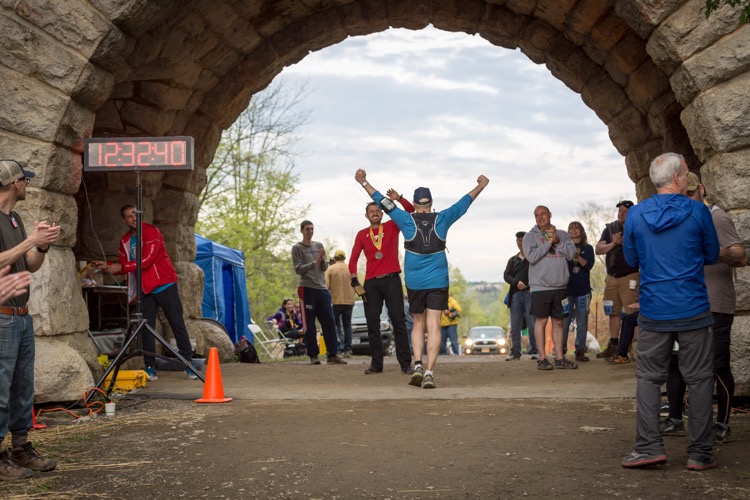 The relay guy caught back up, which worked out perfectly; it was keeping me mentally alert. We hammered downhill to Duck Pond as fast as I could go, and I pulled away on the short flat stretch to Lenape Lane. Two switchbacks here and no Etan. A mile to go—one final, two-minute climb. I turned to check over my shoulder, almost seizing up the entire left side of my body. Shit, don’t do that again. But still no Etan. I was going to make it.

In the end, I just missed out on the seven-hour mark (by 78 seconds) but held on for a 94-second victory margin. The entire gap came from the climb from Lyons to Castle Point, which I ran about two minutes faster than Etan. Our splits from Lyons to the finish were separated by a single second.

This wasn’t my first ultra win, but the most gratifying for sure. I came in fairly fit but a bit undertrained (not peaked) and looking mostly for a training stimulus. I haven’t run scared like that for quite some time, particularly trying to hold off someone as talented and tenacious as Etan, and I’m grateful that he was there to push me.