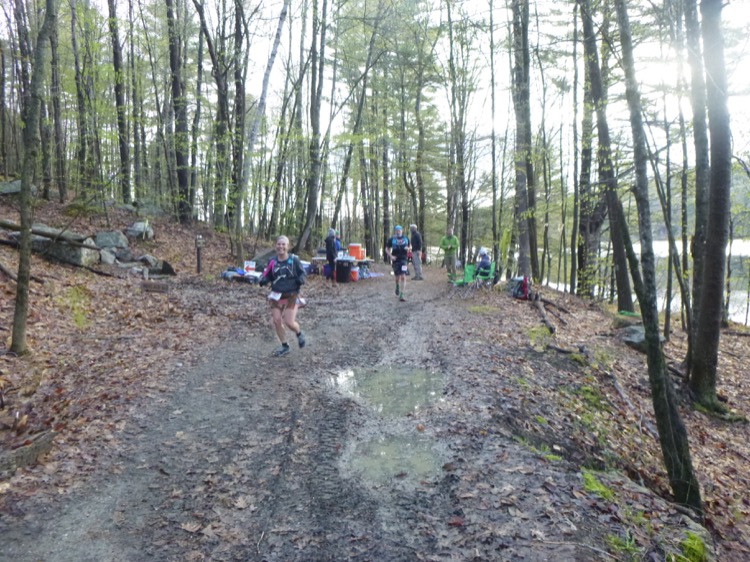 Riverlands 100 in the Maine Forest

If you’re keen on a rip-roaring adventure and usually opt for the road less traveled, the Riverlands 100 Mile Endurance Run near Turner, Maine, is definitely for you. Only in its third year, race directors Valerie Abradi and Mindy Slovinsky have put together an ultra event with an old-school feeling and lots of down home charm that will simultaneously delight and challenge you.

The course uses almost every bit of the Androscoggin Riverlands State Park in southern Maine, about an hour north of Portland, and showcases Maine’s dense forest. With about 12,000 feet of elevation gain, the course follows a 25 mile mostly out-and-back loop repeated four times all in the forest with glimpses of the Androscoggin River. About half the route is single track with significant roots and rocks requiring constant attention. The other half is runnable jeep road. Moose were in short supply this year, but the quiet of the forest did ring from time to time with woodpeckers hammering on tree trunks, frogs croaking, owls hooting, and the eerie cry of loons.

The tone for the race was set at packet pickup in a big rambling mess hall called the Boofy Quimby Memorial Center, where local products were mixed in with the race swag the RDs handed out themselves. The banquet tasted home-cooked, but the kicker was loads of chocolate chip cookies and cupcakes. The runners were chatty, and along with lots of local Mainers, there was a good supply of Canadians and folks from other New England states. 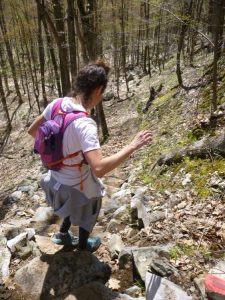 A full day of light rain on Friday gave way to partly cloudy weather on Saturday morning, which lasted the duration of the race, so conditions were ideal as long as you’d packed a decent jacket for the early morning chill on Sunday morning. Less accommodating was the footing on the single track that made up about half the course. Roots and rocks were scientifically placed to trip you up. Between the footing and the constant rolling of the terrain with almost no flat running, runners had to stay engaged and work whenever they weren’t taking shelter at an aid station. It was a tough enough ordeal to wipe out more than half the field of about 60 runners, so don’t expect to march through this race unchallenged.

Helping racers along are friendly aid stations about every six miles which were all designated drop bag sites and blessed with a seemingly endless supply of grilled cheese sandwiches, soup, and bacon, not to mention an early breakfast on day two. The out-and-back 25-mile loops kept runners meeting up often. At the start/finish you had to avoid the siren call of your car beckoning you to quit.

The race was capped with an awards ceremony held at another Maine location—a crazy, outdoorsy, riverside campground (Martin Stream). There was more great food and now, a completely connected bunch of beaten up runners and tired volunteers celebrating each other’s achievements – very old school, very wonderful.

Riverlands is a great up-and-coming destination race. Put it on your calendar before the word gets out. Visit riverlands100.com for more details.