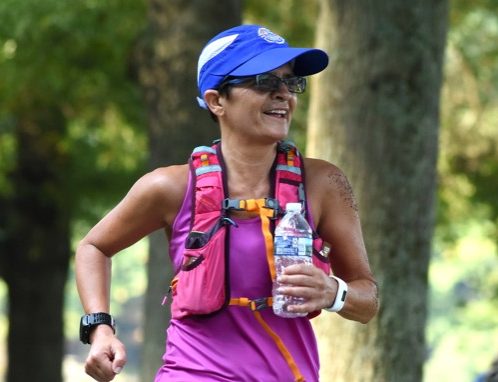 Azhar Ibrahim still smiling despite having broken her arm in a tumble. Photo: Mike O'Grady

The 5th running of the Rick O’Donnell Memorial 8 Hour Ultra Challenge, referred to by most as Rick’s Run, was held on Sunday, September 17, 2017 on the trails of Greenbrier State Park, Boonsboro, Maryland.

Rick’s Run Ultra Challenge participants have eight hours to navigate the 5.22-mile loop course as many times as possible, needing six loops to be recognized as an ultra finisher. The tread ranges from grassy and smooth to technical rock gardens with a skosh of pavement thrown in just as a reminder of how awesome it is to be running the trails. Each loop on the rolling, mostly wooded course features two significant climbs adding up to 750 feet of climb/descent per loop. 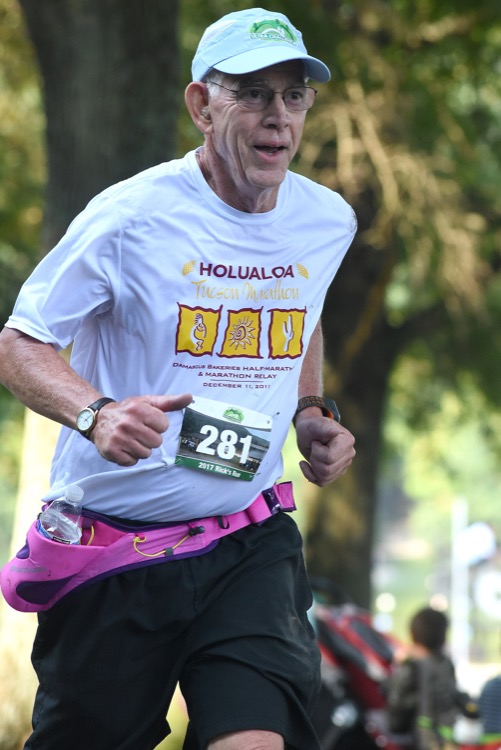 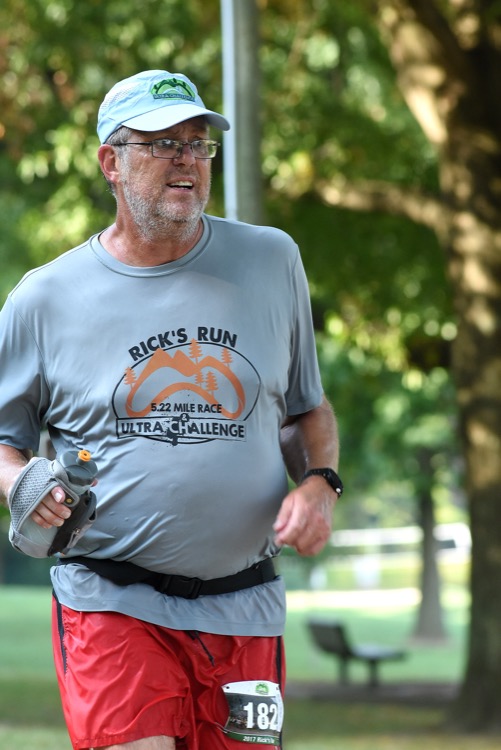 During a pre-race chat with standby EMT personnel (while being pelted by falling acorns), I mentioned that in the past few years our first aid folks have only had to hand out a couple of band-aids and that she should expect a slow day. Little did I know, with that statement I had opened up a hornet’s nest of karma. Literally.

There was an impromptu survey taken during the early hours of Rick’s Run that studied which parts of the human anatomy angry hornets prefer to sting. Unfortunately, of the 246 starters in both events (there is also a concurrent 5.22-mile run), we only had about 30 runners “step up” and offer their bodies to benefit this highly unscientific study. Once the data was compiled by our EMT, the findings showed that overwhelmingly, Maryland hornets seem to go for the human posterior and/or groin region. The study was brought to a swift end by park personnel with the assistance of a couple of active study “volunteers.” Between the stings, lacerations, abrasions and the broken arm, our EMT was never bored! 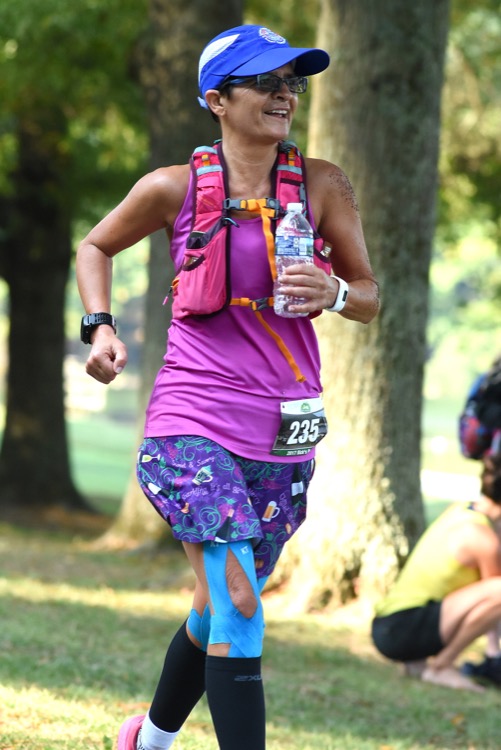 Azhar Ibrahim still smiling despite having broken her arm in a tumble. Photo: Mike O’Grady

The previous Ultra Challenge course record had been held by Lori Cooper, who logged eight loops in 2014. Nobody exceeded seven loops in 2015 or 2016, but this year, six in the men’s field surpassed both Brian Schmidt’s 2013 men’s record seven loops and Lori’s eight-loop 7:50 performance. (Brian was back at Rick’s Run this year after being on the losing end of a near-fatal truck-meets-bicycle accident in June 2016. His goal of running two loops – quickly – was certainly met. I fully expect to see him vying for a podium spot next year.)

In the men’s race, Dustin Campion drove a hard pace from the start, leading through the fourth loop, but the fifth loop was the great equalizer with all three of the competitors who would eventually stand on the men’s podium checking into the sole aid station within a couple of minutes of each other. Last minute entrant Adam Walton led the race from loop six forward, running a bit scared as the ever-present din of falling acorns sounded to him like footsteps closing the gap. Matthew Rydzik and Dustin Campion rounded out the top three men, each turning in stellar performances! 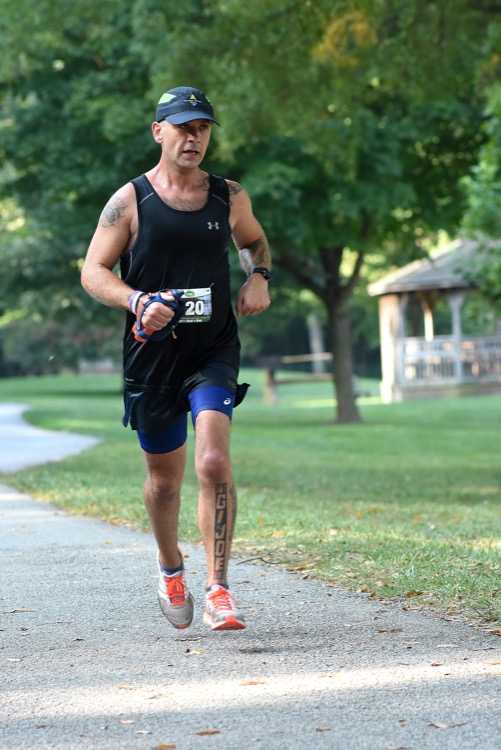 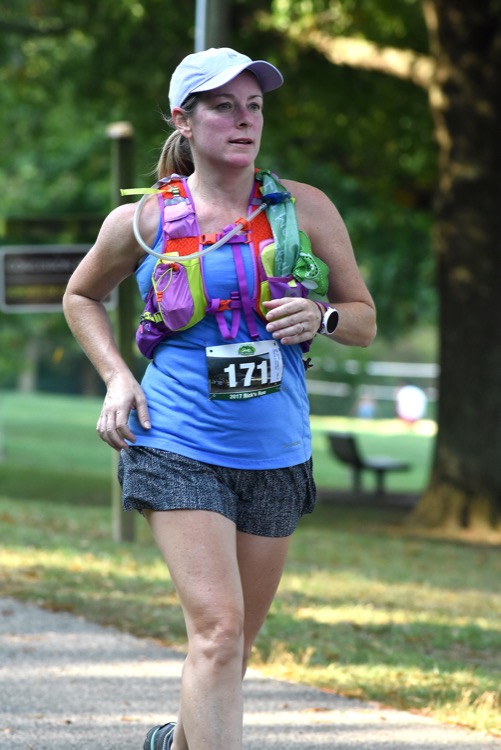 The women’s race also featured a lead change that was never looked back from. Lindsay Mock trailed local (and four-time podium finisher) Jana Snider for the first three loops but she took the lead on the fourth loop and never relinquished it. Lindsay and Jana each completed seven loops (36.54) miles, but Jana worked hard to finish under the eight hour cutoff, turning in a 1:12 final loop after running even splits for the previous three loops (1:16:55, 1:16:56, 1:16:31), finishing only seven minutes under the final cutoff.

The Rick’s Run 8 Hour Ultra Challenge takes place in a perfect setting. Race HQ is lakeside, with hot showers mere steps from the finish line. Add in Dave Hartman’s aid station expertise, hot post-race eats, a laid-back vibe and it’s an ultra match made in heaven. With all of the record-breaking performances this year, I can’t wait to see what our competitors will bring in 2018!

Since this race was a last-minute decision for me, I didn’t do much homework on the course. But I talked to 2016 winner Lance Dockery the morning of the race and learned there was one climb (and another little one) and the rest was pretty runnable. And, being an east coast race, I knew to expect a little mix of everything: some smooth singletrack, a bunch of fallen acorns, branches, and leaves, exposed roots, and tons of loose rock.

After the first half mile, I knew those in front of me went out too fast, so I hit the brakes and did my own thing but kept it honest (getting passed by a ton of runners on loop one). On the first descent, I was just trying to stay upright and not turn an ankle on the rocks. When I hit the first climb, I ran the first portion of it and then power hiked the short but steep part before running the rest of the climb to the top. After a little descent and another short climb, there is about a mile and a half downhill cruiser back to the start/finish. This was actually the toughest part of each loop for me! The trail was somewhat technical here with a ton of loose rocks so the footing was tricky at points. (After a few loops of pounding on the rocks through this section, the bottoms of my feet were definitely feeling it.)

Back at the start/finish aid station, I chugged 20 oz. of Tailwind (I didn’t carry anything with me on the loops), coconut water, watermelon, a gel, some salt caps, then hit the trail again. Rinse and repeat eight more times. I found a nice little flow after a few loops and moved into first place at the beginning of loop six. I wasn’t sure how far back the other guys were from then on, so I was running a bit scared the last few laps. Every falling acorn sounded like footsteps, so I was constantly turning around because I thought someone was right behind me.

The loop format was awesome because you constantly saw other runners. Each loop went by surprisingly quickly since there was a little of everything and that broke it up nicely. It was so great returning to the start/finish each loop and hearing the cheers from other runners and crews. And the aid station volunteers were quick to help (and quick to get you in and out which is always nice). We were all in it together and each runner was working hard to achieve their individual goal. It was a lovely day on lovely trails with lovely people.