It’s 4:45 a.m. on another quarantine Tuesday and as I lay awake in my bed, my brain is shooting a million directions. Like a lot of us these days, I continue to battle worry, uncertainty and anxiety — especially as it relates to my job. What’s my job? “I’m a race director,” says the little voice in my head. This is evenly followed by, “But why?”

You see, just yesterday I was desperately holding onto one of my races that was originally scheduled for April 4-5 but had to be rescheduled for May 24-25 due to the novel coronavirus that we all now call our “new normal” (I hate that term).

The need to postpone the race was based on the decision of the parks department to revoke the original permit. But my decision to still hold the race rather than cancel it, was based on the ultrarunner in me, which was screaming for some normalcy, desperate for contact and in denial to accept the inevitable. Why? Because that’s what ultrarunners do. We don’t quit. We struggle, crawl, pull our shit together and make it out to the other side. Somehow, we are good at finding that light at the end of the tunnel, no matter how bleak it may appear in our times of despair. So, there I was, holding onto a bleak light in a shit storm, and I was not going to abandon my post. 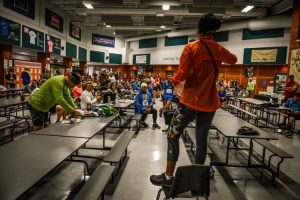 What followed my decision to reschedule the race for May was a lot of negative commentary, cynicism, and criticism of my actions as a race director. People I depended on for support threw in the towel on me, and I was on the receiving end of a barrage of emails from runners unhappy with my decision to host the race, unsatisfied with the deferment policy and unhappy because they wanted a refund. One runner in particular sent me a long list of his beliefs along with what he thought I should do (“in your best interest as a race director…”) and his suggestion that I do the race as a virtual event. He even followed it up by attaching Maslow’s “Hierarchy of Needs” chart. Um, thanks?

Naturally, I questioned my decision to reschedule the event and wondered if I should have accepted a cancellation (what I saw as a DNF) back in March. But an ultrarunner’s brain doesn’t work that way. We slog from aid station to aid station in the hopes that we make it to the finish line. The little voice in my head repeatedly said, “Be realistic. Accept the outcome. This race isn’t happening.” But there I was, adamant to keep running until I missed the cutoff at an aid station, only to get pulled off the course.

On Monday, May 11, I got the notice from the park’s department for a second reschedule and I made the decision to cancel the event for 2020 altogether. I had to let it go.

The point of this story is simply to provide insight into the daily hustle of a race director. I’m not looking for sympathy. This is my job. I choose to do it, and it comes with ups and downs. But there are a few things I’d like everyone to know. Most race directors are dreamers. We’re optimists who spend a lot of time in front of a PC working on the many details that no one will ever see unless they’ve been involved with race directing themselves. We’re cautiously hopeful for favorable outcomes, and we put our heart and soul into our races to obtain the desired results. 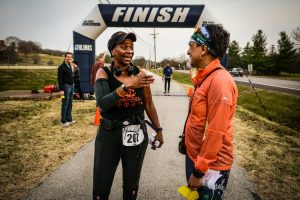 No one will ever know the feeling a race director gets when she sees a runner striding across the finish line on the course that she herself loves to hate. Race directors don’t shy away from challenges; in fact, our entire careers are based on being visionaries and rolling with the punches. Most race directors I know are runners first, and the struggle to complete the hosting of a race isn’t all that different from the struggle of finishing an ultramarathon.

I understand that human beings are independent, contrary creatures and that we often learn more from each other when we disagree. If we strive to live forever in a state of mutual acceptance, we just carry on in the same old way. But the next time you reach out to a race director with anger and spite, perhaps remind yourself that by simply having some empathy, we can share our different opinions in such a way that we spark conversation and create closeness instead of cruelty.

And if you’ve never thanked the race director of an event that touched you as a runner, send them a note, because right now we could really use your patience and support.

I was signed up for this race and just want to say how much I admire the work Kovach does for the running community. It’s truly a labor of love.

I’ve done 3 of her races so far and they’ve been awesome. I signed up for 2 more! Dark2Dawn just ran with all the covid protocols and I’m so appreciative to Shalini and the TTR crew for making it happen.

You have my full support! It is a tough time for everyone. This crisis has highlighted the difference in people. Greatness is not found in one’s ability to tear others down nor in someone’s PR. It is found in the grace, dignity, respect, humility and kindness we show for one another while we all do our best in unprecedented circumstances. To have been blinded by hope, even if it didn’t end up how you wanted, is not necessarily a bad thing. In fact, isn’t it one of the biggest motivations for us all? Thank you for all you do. Keep hoping! See you out there soon!

I think this is a fantastic article. It takes a lot of time, effort, and discipline to be a race director (I have never been one, I am only going off my own opinion). The only email people should send to a race director is thank you for your hard work. That job is tough, you have to feed and cater to every runner. You have to set up the course and make sure pretty much everything is perfect. You have to have emergency plans in place. Its a lot of coordination. And then when situations like the one we are currently in now comes up, you have to be the one to tell people the bad news. Then to top it off, when you try your hardest to not cancel a race, people still want to complain, that’s just crap. When my 1st 100 mile race got cancelled, our race director did everything in his power to be able to run it. The first thing I did when he sent out the cancellation email, was email him back and tell him thank you for all the hard work that was put into the race before it got cancelled. That truly meant so much to me that he tried his hardest to keep it going.

As far as the person who emailed this race director and attached Maslow’s “Hierarchy of Needs” chart, I would have replied back with a bunch of David Goggins videos and told him to keep his opinion to himself.

This community is about being supportive of each other and trying to be the best that you can be.

So to all the race directors past, present, and future, THANK YOU FOR ALL THAT YOU DO. Thank you for turning someones dream into a reality. You are greatly appreciated and do a fantastic job!!!

I have directed road, trail and snowshoe races. I am famous for not cancelling. I have only cancelled once when due to an ice storm the governor ordered state roads closed. Because of this folks even showed up for my Feb snowshoe race the day after an ice storm, blowdown and snowstorm. Actually, I had no choice on that one because all phones and internet was down and there was no way to communicate. A crew (meaning four of us) spent hours into the night and the next morning clearing a revised, safe course. People were happy to get out of their cold houses and get warm running! Still, the stress is incredible and I get it. But you do come away with some great stories.

It amazes me how many runners think an RD’s job is to collect a bunch of money, scratch a line in the dirt, yell “Go” and then hang out at the finish line. It is also sad that most runners have never been an RD or even volunteered at a race, though Ultra folks are much better than road racers. I always donate my entry fees if the race is cancelled. Not everyone can afford to but I bet most can. So, just like those bad patches, we will have to figure a way through this to. Runner, Former RD, Friend of some Rd’s, Volunteer and Optimist!

I’m RD for the Cirque du Griffith Park 6/12/24/100 and former RD for 16 years of the Bulldog 50k Ultra in CA. Your description is on point for me about pouring my heart and soul in race directing. I am blessed that my response has been uplifting from my runners and I can only attribute it to having smallish races (200-600 participants) over the years so we do get to know each other pretty well. Stay well <3