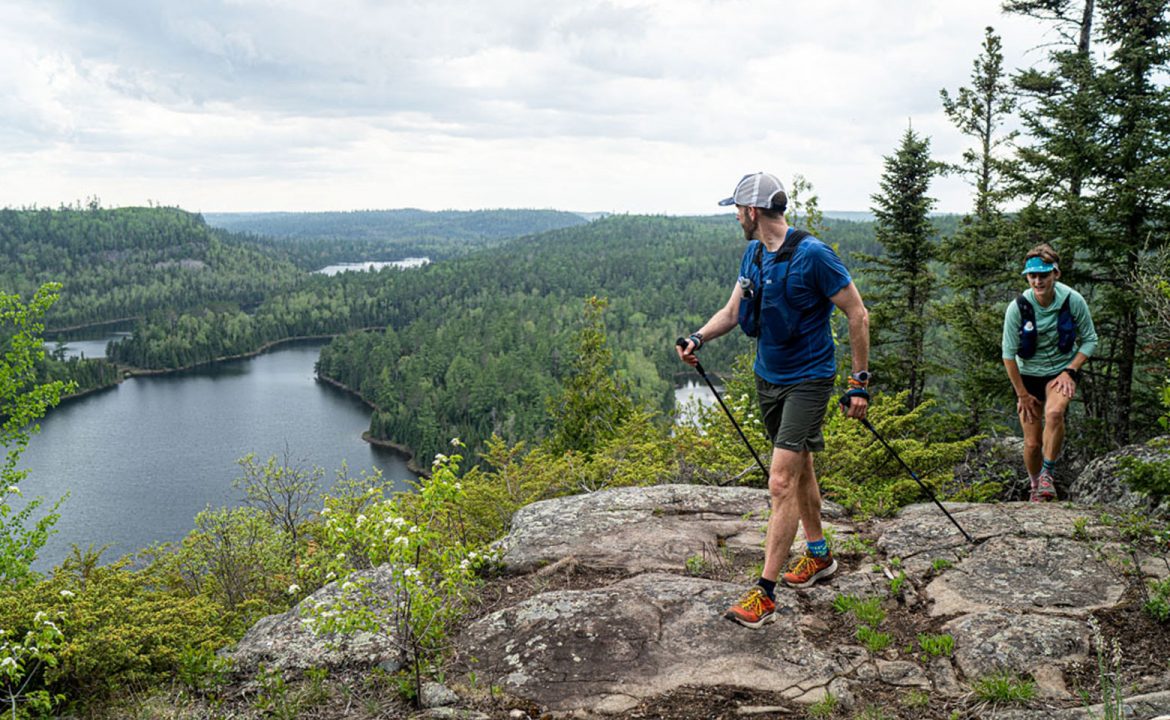 “I need to sit down,” Alex Falconer said after cresting one of the dozens of 500-foot hills on the 110-mile traverse across the Boundary Waters in northern Minnesota. I gave Alex space and looked around. Past the singletrack through thick white spruces, I saw a giant freshwater lake – just one of thousands in the region.

After just 10 miles of pacing Alex over relentlessly oscillating trails, I understood what people meant when they called Midwest trails “death by a thousand cuts.” Plus, 90-degree heat and humidity engulfed us, even though it was only late May.

Running through the Boundary Waters Canoe Area Wilderness, America’s most visited wilderness area, is not for the faint of heart. But the views and wildlife – countless fish species, moose, loons, river otters, bears – make it so worth it.

And Alex still had 80 miles to go.

A few hours later – heat persisting – and again, I heard, “I need to sit down.” Except this time, it was our photographer and experienced runner, Brendan Davis. I smiled because this traverse was turning out to be a memorable run, not just a successful advocacy trip.

As Brendan vomited, Alex pushed ahead, finding the second of many winds he’d experience on this 38-hour run, setting the only known and therefore, fastest known time (FKT) in the process.

We came across a middle-aged couple relaxing at their campsite just off Border Route Trail, the first part of the Boundary Waters traverse. In a flash, Alex instantly transformed from ultrarunner to advocate. He pulled sweaty campaign stickers out of his hydration pack, asking the couple if they knew about the proposed copper mine threat to the Boundary Waters. As an environmental advocate myself, I was awestruck at his ability to educate and connect with strangers 45 miles into the longest run of his life. His passion was inspiring.

“We didn’t even know! We love paddling here more than anywhere in the world.” The couple thanked Alex and vowed to check out the Save the Boundary Waters website when they got home. Back on the trail, Alex turned to me, “See, people just don’t know. That’s why I wanted to do this run.”

The Boundary Waters ecosystem was preserved by Anishinaabe people for thousands of years and has since been protected in the form of the wilderness designation and Voyageurs National Park in the US and Quetico Provincial Park in Ontario, Canada.

Typically known for canoeing, fishing and camping, the Boundary Waters also boasts world-class trails. That’s why Alex wanted to run across the area and bring awareness to the running community, given that a Minnesota-based subsidiary of a Chilean mining company has proposed to build a sulfide-ore copper mine on the border of the Boundary Waters.

A mine here would not just impact the thousands of outdoor recreation industry jobs in Ely, the town closest to the proposed mine,[1] but it would have ripple effects (pun intended) on the entire freshwater ecosystem, on the millions of people and animals who depend on that water for basic living needs, and on the downstream folks whose jobs also rely on the freshwater lakes.[2]

For example, if this mine were built, it’s almost guaranteed that drops of acid mine drainage would pollute the Hudson Bay in Canada. Sulfide-ore copper mines are notorious for polluting acid mine drainage into adjacent watersheds.[3]

It’s well-known that we need more copper in order to electrify our energy infrastructure and transportation systems, yet is it worth risking polluting a major freshwater ecosystem worth the unknown amount of copper this mine would produce?

One Person Can Make a Difference

Alex is also the government relations director for the campaign, Save the Boundary Waters. Almost all of his family vacations have been at the Boundary Waters, and his wife and three kids know more about the area than the information posted on its Wikipedia page. Protecting this place is Alex’s life’s work.

Unfortunately, Alex cannot single-handedly prevent the copper mine. We need the House of Representatives and the Senate to pass related bills to permanently protect the border of the Boundary Waters from any future mining.

This fall, the House of Representatives will vote on one of those bills. The Senate bill hasn’t been introduced yet, but hopefully one will be authored by Senator Tina Smith once experts publish an updated environmental impact statement.

Come to your own conclusions and to send a note to your representative with your opinion on the matter. Even though this place is in Minnesota, we all have a say in whether mining should occur on a wilderness area’s border.

And while you’re at it, check out the Border Route and Kekekabic trails—Alex wants someone to beat his time.

Clare Gallagher is an ultrarunner and environmental advocate living in Boulder, Colorado. After studying the impacts of climate change on coral reefs at Princeton, she transitioned to running long in the mountains.

When u know the facts publish this article in your magazine. Opponents claim it will pollute. The mine has spent billions of dollars meeting permit requirements that make sure it won’t so u can drive your tesla. Or use your iphone. Permits were issued based on facts not feeling and what not. None of the boundary waters will be mined.

By not allowing it to mine you approve of pollution mining in other countries with no permits and child labor to get copper and precious metals.

This is a bull crap article not based on facts. First fact is the Boundary Waters has been logged and use to have resorts and fly in camps throughout. Before the government takeover there was much more recreational use than now. The local people took better care than what happens now because they worked and made their living here and cared about the environment without government intervention. Mining has gone on near the bwca for hundreds of years and you can safely drink the water right out of the lakes. The new mining proposed has been under a microscope for years and would be under rules and regulations and I believe would be the safest in the world. It is time to stop the lies.

Nancy, I recommend you check out the peer reviewed science papers this article cites about predicted mining pollution and economic impacts.