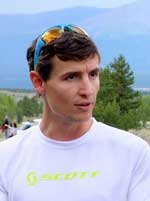 Preparation To Finish Your First 100-Miler

At the end of the year most runners think about their plans for the following year, including their target races. This early planning is exacerbated by the number of lotteries for major races, something that’s becoming more common all the time. Due to the limits on participant numbers and the fame of events like Western States 100 or Hardrock 100, many readers will find themselves with what could be just oncein- a-lifetime opportunities to run one of these oversubscribed races.

Therefore this article is designed to maximize your chance of finishing any 100-miler, especially if you haven’t finished one before. Rather than focusing on the physical training, the advice concentrates on the mental and tactical side.

This applies both to your training and race day. Maybe you got lucky in a lottery and don’t want to waste a valuable race entry, but don’t let that cloud your judgment. There’s always a fine line between an annoying niggle that’s okay to run on and a more serious injury that could lead to months of rehab. It’s not worth risking your entire running career to attempt a race so it’s best to check with a medical professional if in doubt. However, try to find a doctor or physical therapist who is an athlete themselves to get a better perspective.

Be Prepared To Finish At Almost Any Cost

One of the key factors that will get you to the finish is for the race to be important enough for you to be willing to dig deep when things get hard. It’s guaranteed in a 100-miler that this point will come, possibly many times, so an iron will is needed to push through and keep moving forward. A good way to train for this is always to pick the more difficult option in training when faced with similar alternatives – for example, instead of cutting a corner on a trail, pick the longer route. The more you do this, the more the tough option becomes your default and your resolve improves.

Everyone will have a different line for how much they’re willing to suffer on race day, but in the race ask yourself if you’re doing longerterm or permanent damage to your body. If the answer is “no” then you will almost certainly regret dropping and you’ll have many months to think it over, while the suffering on race day is for a relatively short period.

Have Positive Motivators To Fall Back On

Linked to the will to finish is the ability to turn negative thoughts into positive mantras. Whenever you get focused on anything that’s going wrong, try to turn it around to what’s going right. For example, repeating in your head that you’re sore and tired won’t help, so instead tell yourself that despite feeling worse you’re still moving forward and that months of training are allowing you to do this.

We all have different reasons to want to finish races, but have your most important ones lined up to remind you during those hard patches why you want to keep going. Bear in mind that even the fastest runners sometimes doubt themselves and every runner is likely to go through dark patches in their 100-miler. This is what makes the distance so special – there’s no such thing as an easy finish, so each one is very worthwhile and satisfying.

At some point something will start to feel bad or go badly. Try to think each scenario through in advance to have a plan of how you’ll deal with it. It’s much easier to do this when level- headed and fresh than when you’re feeling dizzy at mile 90.

A good rule of thumb is to relax and enjoy the first half as much as possible. Try to take in the scenery, chat with other runners and generally have a good time. This helps to stop you going out too fast or focusing too much on time in the early stages. Besides, most trail hundreds have beautiful courses in exotic locations, so it’s worth appreciating that during the race.

Linked to the last point, don’t zoom out at the start and wear yourself out. Your 100-mile pace should be comfortable and relaxed for as long as possible. One useful tip is to slow down on a hill in the early stages if you don’t think you’d be able to do it as fast in the second half of the race. Try to keep the pacing fairly even throughout since the longer the race is, the more important your speed at the end is – this is the point where time goals typically go out the window, not the early parts of the race.

Consider Whether A Pacer Is Needed

You may assume that a pacer will help drive you on and improve your time, but the choice of pacer is important and not all runners find them helpful at all. If you’re a very driven individual and think that having someone around while you suffer might not make the time pass more quickly, at least give thought to whether you need a pacer or whom you choose to pace you. Family members aren’t always ideal because they may not be as familiar with the sport and can care too much if they see you struggling, rather than giving you a kick in the butt at the appropriate points.

Even if a pacer isn’t for you, a good crew is likely to save you time at aid stations and deal with your ailments more effectively than you will alone. However, they won’t be much use if you don’t explain your plan for the race in enough detail. It’s the runner’s responsibility to make sure the crew knows exactly when and where to go, plus to stick to the race rules. The more they know about ultras, the more help they can provide, but also the better they know you, the more effective their advice can be.

Don’t Drop Out On A Whim

Finally, 100-milers are such long events that there’s usually time to reflect if you decide you want to drop out. If that’s on your mind then don’t immediately quit at the next aid station. Instead, take a little time to eat, drink and look after yourself since it’ll help put the day in perspective and could perk you up significantly. This obviously doesn’t apply if you have a serious injury, but most drops are through choice and I’ve seen many people regret their DNF at their leisure in the months after the race because they realize they could have walked in a finish under the cutoffs.

Overall, bear in mind that the longer a race is, the more the mental side dictates how well you do. These simple tips can help to get you through the bad patches and avoid many of them happening in the first place, especially if you try to react to issues in your run at the first hint of something going wrong.

Great advice that I will certainly take to heart as I try for my first 100 mile finish this year. And one more thing to add to Ian’s bio – he runs for the Quicksilver Running Club Ultra Team!