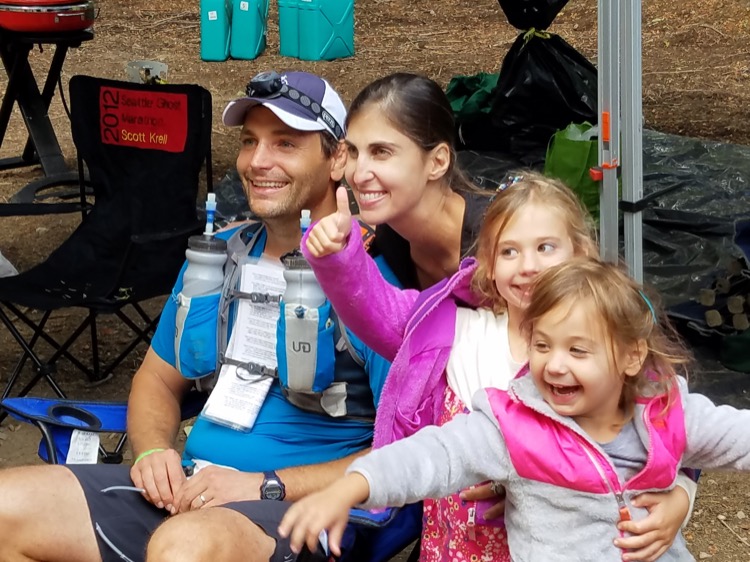 Who says ultra running isn't a family affair? Sheer joy on the faces of Gabriel Szerda and family. Gabe looks like he never broke a sweat. Photo: Scott Honaker

A primary goal of the Plain Endurance Runs is to give experienced long-distance mountain runners an opportunity to challenge themselves in a way fundamentally different from the typical 100 mile trail event offered today. Plain is an unmarked, no aid-station race that provides runners the additional challenge of having to be totally self-sufficient while, at the same time, being expertly tracked by the Snohomish County Search and Rescue Operations Support Team. The event is held on established, well-marked trails in the Okanagan National Forest so route finding isn’t really an issue, it’s just reading the map and following directions. The leaders occasionally get excited and sometimes forget the basics of staying on course, but then mid- and back-of-the-packers can make the same mistakes.

The Plain Endurance Runs went through a significant transition this year when Tom Ripley and Chris Ralph, who founded the race in 1997 and nurtured it for the last 19 years, handed the reins to “the Tims,” Tim Stroh and Tim Dehnhoff. Plain veterans will attest to the fact that there were no discernible changes to the race. Tim Stroh has been a participant at Plain almost every year of the event (16 of the 19 years), and Tim Dehnhoff has led our excellent Search and Rescue Operations Support Team team since 2000.

Twenty-eight 100 mile runners and eight 100K runners started from Deep Creek Campground at 5 a.m. Saturday, September 17. The weather was less than cooperative with cold rain and high winds along the upper ridges, which is extremely uncharacteristic for the “dry-side” of Washington this time of year. But, overall we had a 53% finish rate which, given the weather, is very impressive and well above average.

Some notable mentions:
Congrats to Steve Slaby, the 100 mile winner! Steve also ran one of the fastest final legs – from Alder Ridge Trailhead to the finish. We seldom have a “race” at the end of Plain, due primarily to the large separation that ends to develop between runners, but this year was different. Steve passed runner-up Nick Reynolds less than a mile from the finish. Nick hung on admirably but Steve just had too much leg left. Nick finished three minutes back. Here’s how Steve phrased it in his race report: “Nick was definitely the better runner that day, but logistically I had outsmarted him. And I had gotten lucky. But as they say, luck is where preparation meets opportunity.”

…and congrats to Kyle McCoy and Jennifer Schwegler, winners in the 100 K. The 100K course constitutes the first loop of the 100 mile course and is a great introduction into the meaning of a tough, self-sufficient mountain run. For those interested in the “Plain” race format, the 100K is an excellent introduction to what “self-supported” really means.

Special mention goes to Mick Clifford who, after leading the 100 mile for the first half day, decided to get in some extracurricular trail time. We estimate Mick put in 125-130 miles by the time he decided to finally finish this thing! Many runners have grabbed extra-credit miles at Plain, but very few continue on to finish. That’s true tenacity! To make it better, Mick was requesting we develop a 150 mile option. One never knows…

And talking tenacity…Glen Mangiantini would not give up! Glen has run Plain before and is very experienced in all things ultra. Having run Cascade Crest three weeks earlier Glen knew he was in shape. He also knew he would make it, even as he was pushing cutoffs…until he didn’t. Not that he couldn’t, he simply ran out of clock. With the current Deep Creek start location Glen has now eclipsed Martin Miller’s epic DNF at 99 miles (remember, Plain is 107 miles). Glen had to call it quits at 101 miles. Yes, he had six more miles to run in one hour – not very doable by a mere mortal at this point in the run. Amazing effort, Glen!

And last but hopefully not least…yours truly Tim Stroh, the new co-RD, completed his 10th Plain 100! Yeah so it took 16 starts to get there but who’s counting. Thanks to Tom Ripley and Chris Ralph for the awesome 10 year finishers’ jacket, embroidered with “1000 miles of Pain.” This phrase has never been truer, with my injuries and little to no training leading into the weekend, it was definitely a challenge.

Thanks to all who support our activity – especially my co-RD Tim Dehnhoff and the Snohomish County Search and Rescue Operations Support Team! You guys…and gals…rock!

Who says ultra running isn’t a family affair? Sheer joy on the faces of Gabriel Szerda and family. Gabe looks like he never broke a sweat. Photo: Scott Honaker