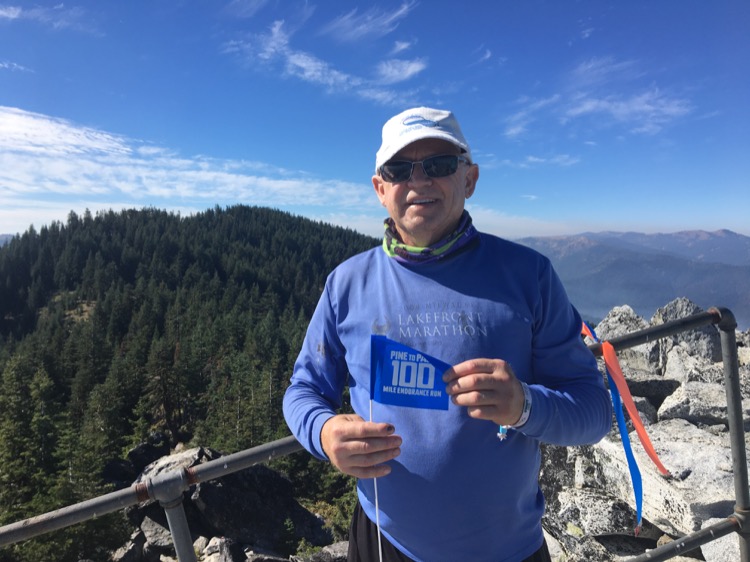 This was my second attempt at Pine to Palm 100 (P2P) after not finishing three years ago. I’m a stubborn old man going on 64 and I like to finish what I start. Looking at the entrants for my age group, there is a big drop in runners that stick with this sport into their 60s. I’m proud to be one of them.

When I was at P2P in 2015, I became addicted to the beauty of Southern Oregon’s Siskiyou mountain range and the friendly P2P organization, especially Hal Koerner, the Race Director, and his volunteers. It’s a first-rate, low-key homegrown event that any ultrarunner should have on their bucket list. And I needed a Western States (WS) Qualifier also.

I had already missed three opportunities this year for a WS Qualifier having DNFed at Umstead 100, Kettle Moraine 100, and Quicksilver 100K. My confidence level was low, and I really wanted to prove to myself that I could still do this. I knew I had to come back to P2P and redeem myself.

The day started at 6:00 a.m. with Hal leading the countdown. There was a bit of smoke in the air because of the fires near Mt. Shasta 100 miles away. However, almost 4,000 feet up the first climb we found we were above the smoke and the sky was clear. Gentle winds began to blow the smoke off to the east – and a beautiful view lay ahead for us when we reached the top of the first ridge above O’Brien Creek.

After a fast downhill to O’Brien Creek aid station, I refueled and hit the 14 miles of dirt road toward Seattle Bar.

I was surprised to see Seattle Bar, mile 28, about 20 minutes earlier than expected. A mango popsicle on the way out made for a nice treat.

Onward to Stein Butte aid with a 2,500-foot climb. It wasn’t a hot day, so I wasn’t suffering too much. Despite the sharp sting of a bee, I was still going strong.

I arrived at Squaw Lake, mile 44, at 4:55 p.m. I made quick work of the 2.5-mile loop around the lake, stopping at the aid station once more to fuel up – and was off to Hanley. I had confidence in myself and knew I was running well despite pain developing in my back from the stress of climbing.

I reached Hanley at 8:12 p.m. and I was hitting my marks as I expected. An out and back to the Fire Watch Tower, I retrieved my flag, refueled and settled in for a long night ahead. I put on an extra layer and got a spare light from my drop bag to face the darkness.

My back was really starting to ache now, and by the time I reached mile 67 at the Dutchman aid station, I considered dropping out. I just didn’t feel safe on the climb from Dutchman. The volunteer there smiled. “You’re already at the top,” he said. “No more climbing.” My excuse to drop vanished. Despite feelings of doubt and despair, I forged ahead.

At 3:00 a.m. I began the eight miles of the Pacific Crest Trail – a tricky, narrow and unforgiving section of the race that requires total focus. It was cold and dark and I was exhausted, but it was a look at the stars above that left me breathless.

After leaving Siskiyou Gap aid station, I completely lost the trail. I stayed put until another runner came by and we figured out how to get back on track. After a 1,000-foot climb, I made it to the top of Siskiyou Gap just as dawn was breaking.

I met a hiker at the top who said to take the time look around and soak this in. That was good advice: I was in awe of the spectacle before me. The peaks of Shasta and Lassen scraped the sky 75 miles away, and dawn’s golden light warmed my face. After a difficult run through the night with pain as my companion, I felt rejuvenated and my second wind kicked in. I said out loud, “I’m going to finish and get a Buckle today!”

Help Along the Way

After leaving Grouse Gap aid station, the trail to Wagner Butte was narrow and rocky, and required some rock scrambling. I’d been on the trail for 27 hours, so concentration was key. Working together with the friends I made along the way, I reached Wagner Butte. After another rock scramble to the top, I grabbed the flag and remembered to soak in the spectacular view one last time.

There was about 14 miles to go and a serious downhill to Weasel Creek aid station. That’s when my legs and feet started to fail me. I realized I was ill prepared for the last 10 miles of the race and started worrying that I’d fall apart. I should have lingered at the last stop and taken in more calories and fluids. A few fellow runners, alarmed at my condition, shared their supplies and pointed me in the right direction. One more downhill jaunt on shaky, unsteady legs and I made it to the streets of Ashland. I rounded the final turn and saw the crowd. Spectators erupted in cheers and helped me push myself past the finish line.

My final time was 32 hours and 2 minutes. I not only finished, but was First Place in my Age Group as well! Hal met me at the finish where I received my Finishers Belt Buckle and a ‘Job Well Done’ from everyone I met. This was by far the toughest 100-miler I’ve ever been in, but I was more determined than ever to finish. When one does something so difficult, you cannot help but become overwhelmed with emotion knowing what you have accomplished. I am so grateful to be able to pull through the adversity and suffering to the euphoria of the finish.  And I’m grateful to my friends, fellow runners, and volunteers that got me here.

Congratulations Stephen, I’ve really only discovered running in my 40’s and to see guys like you still doing it well into your 60’s makes me realise that it’s never too late.

Great job Stephen! I was there that day as well for my redemption from 2016. I’m happy that I got it done. It was definitely my hardest race to date. Congratulations!

Awesome story and awesome accomplishment. Thank you for sharing your adventure and giving hope to all of us old folks out there. Rich V.