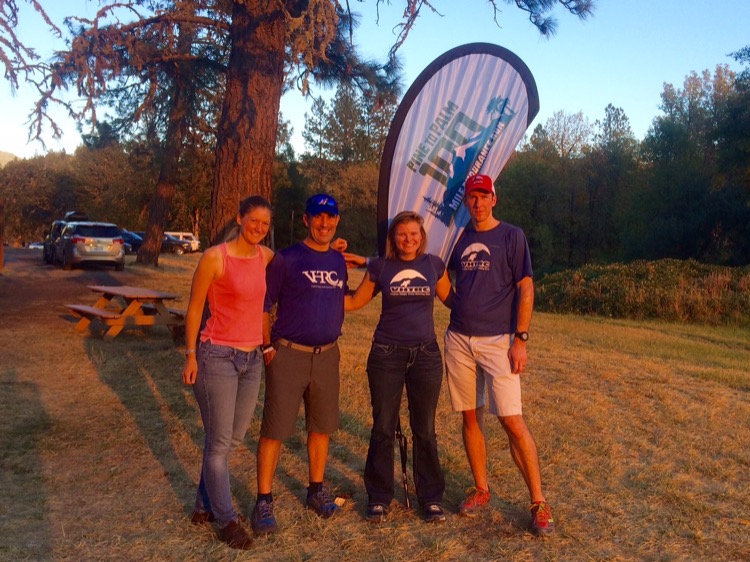 Pine to Pain, that’s my nickname for the Pine to Palm 100 Mile Endurance Run, Hal Koerner’s race traversing the arid Siskiyou Mountains of Southern Oregon with over 20,000 feet of gain. Unfortunately, Pine to Palm did not go as planned and I was disappointed to pull the plug at mile 59. It was a day of long, exposed climbs with record high temps in an unfamiliar area. I joined a few other Virginia Happy Trails Running Club members for what would prove a daunting task to all.

When we started at 6:00 a.m. from the staging area near Williams, the weather was cool and dry, making it all too easy to start out fast up Grayback Mountain. Bee stings only a couple hours in added unnecessary stress and discomfort. After the first major aid station at mile 28 came the hottest climb of the day but in my mind, things were already going downhill. Mentally I dropped at mile 42, but continued to death march to aid stations at miles 50 and 52, trying to rally. The only warm food available at this point was ramen noodles and hash browns. After trying somewhat successfully to resolve dehydration and nausea (which I attempted to remedy by jumping in a lake), I was left with irreparable muscle soreness from cramping throughout my body. After over an hour at the Hanley Gap aid station where I debated dropping, I decided to hobble forward in a true act of self-loathing. Seven miles later at Squaw Gap, I had nothing left to give, physically or emotionally, and my decision to drop became crystal clear.

Excuses aside, I am already realizing some of the mistakes I made in the race that will serve as valuable lessons going forward. While the pace seemed comfortable at the time, in hindsight I disobeyed some of the tried and true strategies for 100 mile races, namely to start slow and then slow down even more. I got caught up in a pack of fast guys. I should have been running my own race and remembered that the race doesn’t start until the 100 km mark. I would have been wise to pack more “real” food in my drop bags; orange slices and gels can only carry you so far. Eating extra early on would have been extremely valuable, since trying to get food down in the heat can be daunting. It’s also important to remember that muscle cramping is mostly the result of over exertion, not necessarily dehydration as once thought. This helps remind me that while it would be easier to blame the hot weather entirely, a more conservative start may have helped me maintain my composure. Running point to point in an entirely new area presented a huge unknown. The bottom line is that I went out too hard and couldn’t get it done.

Pine to Palm is a challenging race on a tough course run point to point with a 58% finish rate according to the live tracking site. The winner was Ryan Ghelfi of Ashland, in an unfathomable time of 18 hours 28 minutes – 90 minutes ahead of second place. These mountains reminded me more of the rugged landscape of Northern California than the lush forests typically associated with the Pacific Northwest. The reality was a series of long steep climbs and exposed ridge running. While the aid stations were adequate, they are of no comparison to the mobile buffets that I’ve gotten used to in Virginia. The trails themselves were not very technical and I recall about half of it being on gravel roads. Perhaps the last third features more single track. All the turns were well marked, though a lack of confidence ribbons often had me questioning if I was headed in the correct direction.

I met plenty of other runners, some who finished strong and others that I commiserated with during our defeats. The majority were from out west but there were plenty of east coasters and, in particular, a strong contingent of Tennesseans. While the volunteers here were great, the biggest human element highlights of this race were the incredible generosity I experienced from spectators and other runners’ crew members. At one point, a woman there to support her son jogged with me around Squaw Lake to try and help me clear my head. After, her son’s friend helped facilitate me jumping into said lake to try and cool off. I met a gal from Nashville running who said her crew would be more than happy to feed me pizza, to which I stupidly declined. Much later after dropping, I was transported to a remote crew parking lot by Dutchman Peak to wait outside in windy, 40 degree weather. A couple here who had been crewing for a friend who had already dropped were hanging out enjoying the party and offered me a spare sleeping bag to warm up in. Then 20 minutes later they drove me the 90 minutes back to my hotel in Medford, which they said was on their way home.

The race could work as a weekend trip, or be built into a longer vacation with potential side trips to the Oregon Coast, Portland, or northern California. I opted to build in one extra day to side trip to the spectacular Crater Lake, about two very remote hours east from Ashland.

Pine to Palm was a humbling experience to say the least. My first DNF in a goal race really hurt, but I’m trying to remind myself that by staying conservative I should have a lifetime of finishes to look forward to. Knowing these lessons and the logistics of the area will do me well when I eventually return to finish what I started.