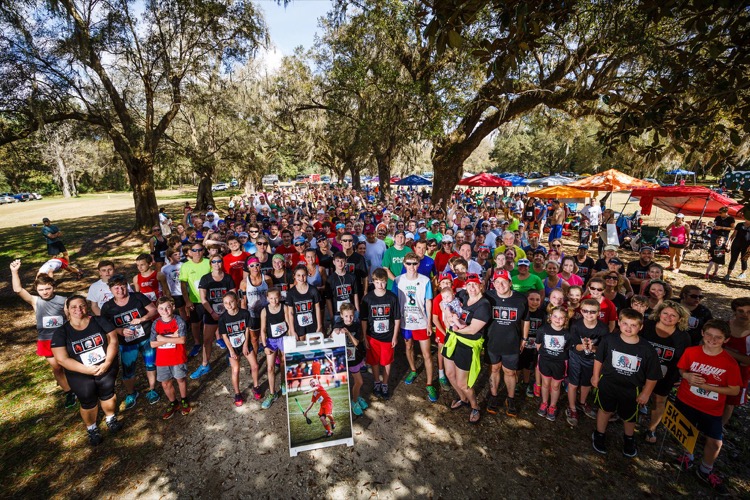 The second annual Peyton’s Wild and Wacky 5k Ultra was held on Saturday March 12th, 2016 at Laurel Hill Park in Mount Pleasant, SC. Its a beautiful park and one of the few areas in the vicinity with a bona-fide trail network.

This race is in honor of Peyton Moore (everyone called him P), a nine year old boy who passed away in 2013 from complications of an epilepsy seizure. P was a local runner, track and field star and all around great kid who lived life to the fullest. When he was in a coma from the seizure and just before he died, I visited his parents (Noah and Jennifer Moore) in the hospital a couple times – its a memory I won’t ever forget. There really is no way to put into writing what its like to see a mother climb into bed one last time with her only child, stroke his hair for the last time, kiss him for the last time, tell him she loves him for the last time – before they turn off the equipment. A father who was about to lose his best friend, his only child, his little boy, his mini-me, his partner in crime so to speak. It was suffocating devastation that nobody could do anything about. It still makes me cry even when I write that all this time later. This is probably not the normal and happy way to begin a race report, but this ‘race’ is more of a gathering to honor and celebrate a boy and his family who hold a very special place in the community. To not recall the core reason for the event is to miss the point.

P also loved to do things many people would consider wild and wacky – like running through the mud, or waiting until the storm hit so he could run in the rain. And so just like P, this race was wild and wacky. The format was 10 repeats of a 5k course through the trails of Laurel Hill Park. It started at 7am and at the top of every hour for 10 hours it was time to race a 5k! There was also a single 5k race, 200 folks strong who joined in with the 10x5k participants at the 11 o’clock hour. Nearly 100 people ran the 10x5k solo, and there were 35 teams of 2 to 5 people who ran as a relay. It was fantastic and since the race circled back by the start/finish mid-way through, it had the feeling of a high school cross country race…times 10!

And just like P would have wanted, the course got a ton of rain the week before the event – enough so that several portions were still mud bogs over your shoes come race day. In fact, a couple of people lost shoes – one guy couldn’t find his and finished the rest of the lap without it. And as luck would have it, the area was in the middle of a heat wave, so by lunch time temperatures were already over 80F.

The first few 5ks are all about learning the course and not going out too fast. They are also about learning how much refueling you can do to stay hydrated but not get to the starting line with a full belly the next time around. And they are also about figuring out how to stay stretched and loose so you can get to the starting line the next time without feeling like Frankenstein.

The first few loops you could find a route to minimize the mud through most of the areas, but after several hundred people made laps, eventually it was pointless and better to just plow right through. It was so bad in places people would literally just laugh out loud as their shoes disappeared and mud and water splashed up to their waist.

By early afternoon, we approached the 6th and 7th 5k and that’s where your body really starts to lock up. You feel like you have to sit down to recover when you’re done, but all your muscles just lock up and then you can’t get running again when the next 5k starts. It was also really hot and I was having trouble staying hydrated. I took a decarbonated 2 liter of Sprite and a decarbonated 1 liter of Coke and completely emptied them by the end of the race. I also drank probably 60 ounces of water. I had several nutter butter cookies and oatmeal cookies and still lost 5 pounds. Wild and wacky!

The timing guy was having a little trouble with getting cumulative numbers out, so the group of 4-5 of us at the top really weren’t sure where we stood. Which is actually kind of cool when I think about it, because if you’re not giving your best and trying to coast in, you’re not doing honor to all the work race directors and volunteers put into the race. So blind we all ran, and when the dust settled, I was lucky enough to come out in 1st place. 3 of the top 6 finishers were women. The lady who finished in 3rd overall ended up only a few minutes back and really had me running scared the last few 5ks (she put 30 seconds into me on one single 5k on #8). She ran amazingly even splits and I struggled to hang on towards the end. She was just always right there and booking it!

This race has some of the best swag I’ve ever seen – a baseball hat, towel, running shirt, food samples – there was even a catered BBQ smoker on wheels from a local restaurant. And of course the typical ultra-fare with all the food and drink you could ever ask for. They had a professional photographer out there too, right out in the middle of the mud, who is currently doing all the editing. I can’t wait to see those pictures! I couldn’t recommend this race more highly.

In the end, I received my award from P’s mom, who now has another little 6 month old boy, just as cute and funny as P was. His name is Miles! I gave her a big long hug, and you just knew that it was a good day.