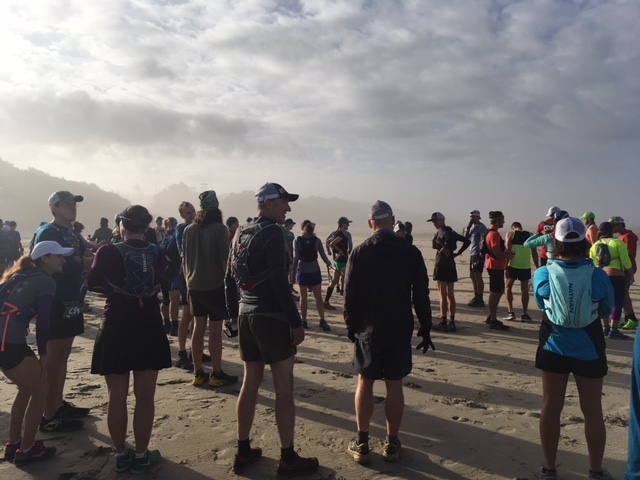 Runners wait to line up on the beach at the start of the Oregon Coast 50K. Photo: Amy Clark

Oregon Coast 50K: Come For The Beach, Stay For The Trails

The mystical beauty of the Oregon Coast harnesses thousands of visitors every year. Just drive Highway 101 any time between Memorial Day until the kids to return to school, and you’ll find a steady stream of cars filled with those who are dying to dip their toes into the 50-degree temps of the Pacific Ocean. Which is why early October is perfect for the Oregon Coast 50K, as runners begin looking for peaceful shores and deserted trails without having to worry about dodging seasonal tourists.

By signing up for this Rainshadow Running event, you’re going to see the most breathtaking parts of the region because that’s how they roll. The 50K starts right on the beach in Yachats, next to the waves behind a (literal) line drawn in the sand. After a fast, flat 10K-stretch down the beach, runners reach the first aid station at the Adobe Resort – which is also the eventual finish line. And that’s when the climbing (fun) begins.

This year saw blue skies and light wind, which is a rarity on the coast during any season. Once the marine layer of fog lifted, temperatures warmed to the 60’s, and the only moisture anyone experienced was sweat from high humidity. After passing through the quaint neighborhoods of Yachats, we began our ascent up to Cape Perpetua via Amanda’s Trail, a 3.5-mile section of the Oregon Coast Trail that recognizes and commemorates the tragedy experienced by the indigenous people who populated the area in the 1800’s. Under canopies of Sitka spruce, Douglas fir and hemlock trees and a sky-high view of the Pacific Ocean shoreline down below, Cape Perpetua is worth the mile-long, 1,000-foot climb. The descent is equally as quick, with fast and furious singletrack switchbacks dropping runners back down to sea level.

Reaching the aid station at mile 14, we prepared for an even longer and higher climb up to mile 20 at 1,500 feet. The trail turns east, away from the coastline and heads back into the rugged Siuslaw National Forest – an area rich with fall foliage, at least five different kinds of ferns and plenty of old growth. The dense vegetation provided room for just enough sunlight to peak through, creating a magical, mid-day landscape. After reaching the next aid station at the top (mile 19.5), the descent was smoothest of the day – a quick 4.5 miles to the final aid station.

You won’t hear many complaints about having to go back up and over Cape Perpetua because of the stellar view, but this last climb of the race is relentless. Miles 25 through 28 were long and a bit deceiving as the sound of traffic along Highway 101 became louder, but we continued to climb. This is also the most technical portion of the entire course, making it tough for those who’d like to open up into a fast finish. Finally, runners reach Yachats and finish on the lawn of the Adobe Resort, alongside waves crashing on the rocks below.

For someone who grew up visiting the Oregon Coast every year, this race was the perfect mix of sand and dirt – just a little bit of both to satisfy my need for mountain trails and ocean air. The beach is the place I come when I need to reset, and I couldn’t have asked for a better day or a more satisfying race. Fortunately, Rainshadow Running fills up the weekend with the 50K on Saturday and a 30K on Sunday, along with a 1K for the kids – so there’s little something for everyone.