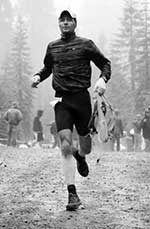 Oh, the Things I Know

When I began this column two years ago, the intent was to bring the historic roots of ultras to today’s newest ultrarunning readers. Driven by the value of sustainability, the notion was to help new runners avoid re-inventing the wheel: to learn the lessons without having to experience, first-hand, the painful mistakes that befell our predecessors.

So when the opportunity arose to speak to the cross country team at my alma mater, University of Wisconsin at Eau Claire, my emotions were similar to what they would have been if I’d been toeing a 100-miler starting line: equal parts gratitude, excitement and terror.

What would I say? The same sports medicine blather? Another heretical diatribe on diet or (over) training? Even I tire of my own voice, eventually.

Head coach Dan Schwamberger, a passionate, genius coach who, in a short half-decade, has turned an also-ran Division III program into a national powerhouse, e-mailed some logistics: I’d be speaking in the main lecture hall of the athletic building. The mere mention of the room number elicited memories of countless kinesiology lectures and team functions, including the very first cross country meeting in the fall of 1997.

I then realized whom I wanted to talk to: myself.

What would I tell myself, that slow, socially awkward, insecurebut- desperate-to-fit-in freshman, if he were sitting in those lecture chairs, today?

I’ve learned a lot of tough lessons since that first day, and perhaps no more than what I’ve learned from the past half-decade of ultrarunning: the extremes of which have served as a crucible from which the richest lessons have emerged. But what I’ve also realized is these lessons apply not only to ultras, but to all running—even a half-hour’s sprint around an autumn cross country course.

On the Friday before Labor Day, I teamed up with my former teammate, ultrarunner Ryan Aschbrenner. We made our way through the thick, humid air of late-summer Wisconsin, into the deep (un-air-conditioned) recesses of McPhee Hall. I was glad to have him there. Aschbrenner, who took second at last year’s JFK 50, has changed little since we were teammates: a smart, rock-steady competitor and teammate.

Standing before 50-plus young runners, my nerves and self-doubts shielded by a sizable slab of sterling silver buckle, I spoke of the lessons learned: what I believed as a young runner, compared to what ultrarunning has taught me over the past half-decade:

Then: “To get faster, I need to run long and fast.”

Now: Sustainable, peak performance comes from diversified training, utilizing renewable training resources such as strength, mobility and efficiency work to maximize every mile run. And don’t forget to strengthen between the ears. As my college coach, marathon guru Sean Hartnett, says, “The brain is the most important muscle” in running. Train the brain.

Then: “As long as I get my run in, it doesn’t matter what I do the rest of the day.”

Now: True fitness is holistic health, including adequate rest and recovery, nutrition and stress management: be it school, work, family or relationships.

Then: “If I train like a top-five varsity runner, someday I’ll be one.”

Now: Recognize and accept your current abilities, and train sustainably where you are, today, in order to progress to the next level. Avoid comparing yourself to others (or to a past or future ideal).

Then: “I have no control how I feel and perform on race day.”

Now: Peak performance starts and ends with attitude and belief. Even short distance races will have peaks and valleys, but positive thinking—and a relentless belief in success—can overcome pain and fatigue, and create energy and strength.

Be A Great Teammate

Now: While we’re wired for selfishness to meet needs, we’re also wired to be helpers. Helping others enhances self-efficacy. The more we build others, the stronger we become.

Have Gratitude And Fun

Now: Running, like life, is a long and often difficult journey. Happiest are those who practice gratitude and find joy in the little moments along the way. The following day, after the varsity-alumni cross country race, a pair of young women approached me excitedly, saying, “We used your ideas and they worked!” I smiled and nodded, approvingly. But deep down, my satisfaction comes the notion that the best way to truly learn something, yourself, is by teaching somebody else.