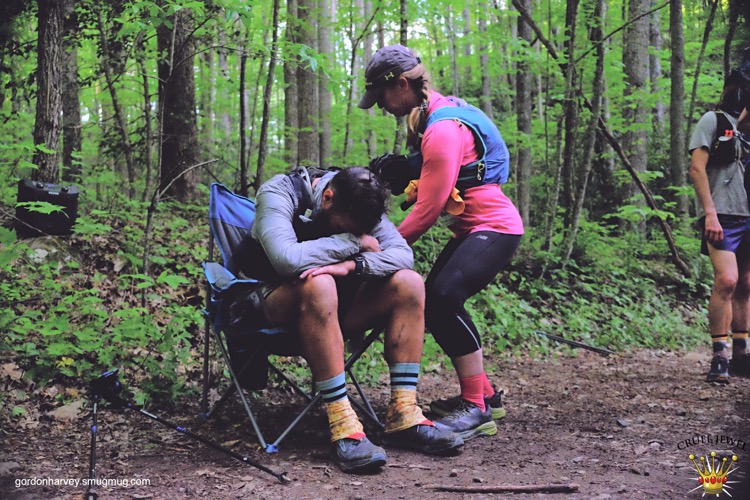 A runner gets aid during Cruel Jewel 100. Photo: Gordon Harvey

Notes from the Trail: Crewing and Pacing

Recently, I crewed and paced Chris Brand to a successful finish at the Cruel Jewel 100 (more like 106 miles) in the Blue Ridge Mountains of North Georgia. This is one of the toughest ultramarathons in the United States with lots of climbing and descending on technical trails and 33,000 feet of elevation gain. Contrary to advice you might find online about how to be a good crew member and pacer, we broke all of the rules. You see, I met Chris on Strava through another ultrarunner I have paced successfully for several hundreds, but he and I had never run together before. Actually, we only spoke on the phone once after I agreed to crew and pace him.

I was fairly confident in Chris’s ability to go the distance given his very detailed race and fueling plan. I joked with one of the aid station volunteers that my runner had used a slide rule to outline his plan of attack (he is a mathematician). Even though this would only be Chris’s second 100-miler, his UltraSignup results were pretty impressive, along with his training record on Strava, which made me believe he could do it.

The job of crew and pacers is simply to get their runner to the finish line. Some may think that crewing and pacing are thankless jobs, but it’s literally a front row seat to watch human beings test themselves against the forces of nature. Later in the race, around the last 30 miles, it is amazing to watch runners overcome pain and suffering to push to the finish. It is also a good way to discover whether or not you might have what it takes to do the event yourself. 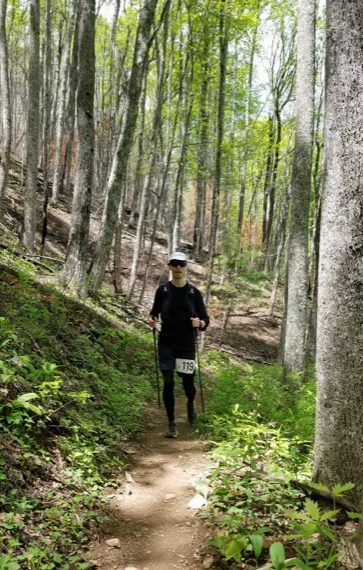 Chris on his way to a 100-mile finish. Photo: Olivia Affuso

Should you take on the job of crew or pacer or both, know that your runner is honored to share the experience with you: the good, the bad and the ugly. Crewing will require navigating the course to make sure that you arrive at the crew access points ahead of time to provide aid, which could include anything from patching up blisters, changing shirts, shoes or socks, refilling hydration and fuel, offering encouragement and kicking your runner out of the aid station and back on the trail. The crew also needs to have good organizational, navigational and communication skills, and the endurance to get the job done on very little sleep for upwards of 30 hours, if not longer. Crew members may also serve as pacers which can be challenging for new pacers unaccustomed to sleep deprivation.

One thing is certain, the crew and pacers of 100-mile races are in the best position to marvel at the sheer will and determination to go on in spite of exhaustion, aches, pains, injury, dehydration, nausea, vomiting, chafing and other physical ailments. As Alex Hutchinson writes in his book, Endure, science shows us that we are far more physically capable than we might think. This is where our crew and pacer(s) come in to nudge us along. Beyond the crew job description, the pacer needs a more nuanced set of skills. Besides being fit enough to cover the designated section of the course, a really good pacer has a sixth sense about their runner’s needs even before they know they need it. It is also important for the runner to communicate with the pacer(s) prior to the event what their expectations are around chattiness, pace, temperament, language, time in aid stations, fueling cues, etc. The pacer should also have a thick skin as the challenges of running 100 miles can turn an otherwise nice person into a scary beast. The pacer may also need to be assertive with a tired runner to motivate them to eat, drink and keep moving.

After being awake for nearly 24 hours, Chris picked me up at Skeenah Gap for the last 21 miles of the race. He was exhausted and his legs were trashed from bombing down the hills too fast in the first 8 miles of the race. In spite of this error, I knew he would finish since we were well ahead of the 48-hour cut off. With his first goal secure, we began to focus on his second goal, which was for him to finish in the top 20. He was now in 14th place, so we needed to keep moving at a steady pace. We would also not see his crew again until the finish line and would have to rely on the aid stations for hydration. Could he even pull off a sub-30-hour finish?

We became 100% focused on moving forward as quickly as possible over tough climbs and descents. So much so, that twice we ran out of hydration before getting to the next aid station and two runners passed us. At our last full aid station before the finish, I had Chris down a full flask of hydration while the volunteers refilled his remaining bottles, and this brought him back from the dead. Somehow, he found a new gear and took off up the final ascent of the Dragon’s Spine and dropped me with 3 miles until the finish. Did I feel bad that I got dropped by my runner? Not at all. We had discussed this possibility before the race, and I sent him off to the finish with a “Go get ‘em!” My job here was done.

If this sounds like fun to you, consider volunteering at an aid station overnight during an ultramarathon to experience the magic of the crew, pacers and volunteers. You won’t regret it. My observations at the Cruel Jewel 100 were nothing short of awe-inspiring displays of superhuman will.

Olivia Affuso, PhD, FACSM is an adventurer, ultrarunner, writer, and wellness coach. She stumbled into ultra running 10 years ago and has completed three 100 mile races and over 25 ultra marathons. When not running or pacing, Olivia conducts physical activity research at the UAB School of Public Health.

Thank you for sharing your experience!

Awesome!! Thank you for sharing . All runners should experience crewing/pacing at least once., Hard work for sure. But the joy and pride of seeing you runner reach the goal is worth all of it!

I got the privilege of crewing my best friend at the FatDog70 Mile in British Columbia, Canada. It was an experience I’ll never forget, being a part of him finishing 4th overall after battling his way into the top 5. I still have his detailed race plan map, aid station by aid station, as a momento!

Thanks for sharing. Love it

I had the pleasure of running the road to Stanley Gap with Chris, congrats on pacing him to a strong finish, those last miles were a beast