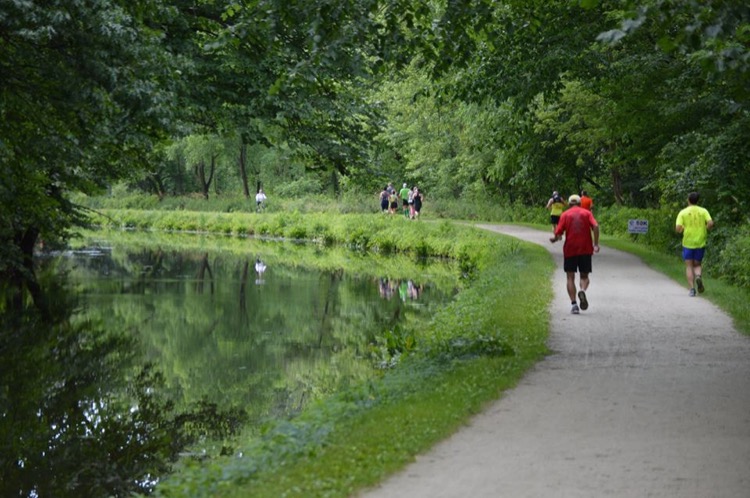 Never Alone at the Eagle Up Ultra

When I decided to sign up for the Eagle Up Ultra in Canal Fulton, Ohio, it was for the sole purpose of earning a belt buckle. There, I said it – I wanted the bling. The course was newbie friendly, a five mile loop on a flat tow path and had nice swag like a headlamp. I was in and just hoping to finish.

For the next few months I peppered the race director, Eric Whittington, with emails he graciously and promptly returned, a good sign. One email detailed a freak-out moment at the finishing times from the prior year. Eric pointed out temperatures were in the 90s at last year’s event, so barring those high temps again, things should go faster. Queue my stalking of Accuweather for the next two months, studying historical trends and weather patterns. Prior to the race, Eric posted the most extensive runner directions and information page I’d ever seen. The race would be timed with ankle tags, there would be online race tracking and a leaderboard at the start/finish area, which was awesome for my family that would be coming down later in the day.

When June 23 rolled around, I felt totally unprepared but really excited to see what the weekend would hold. Ken Westerman, my seasoned ultrarunner guide and I drove down from Michigan the night before for the free camping. I was surprised to see almost all the empty grass filled with tents and campers, but we managed to find a few spots right on the course allowing us to set up in a prime location. In addition to the 100k, there were also a 100-mile, 50-mile + 50k, 50-mile and 50k options also being run that weekend. The race benefited Team RWB, so there was also a ruck division for those hardy souls willing to lug at least 22 pounds on their back for the duration. The patriotic tone of the whole weekend was inspiring and humbling. We walked a bit of the crushed limestone course that night. Gaiters might have been a good idea. It was really hard packed, but there was the potential of getting pebbles in your shoes, which sounded really delightful over 62 miles. 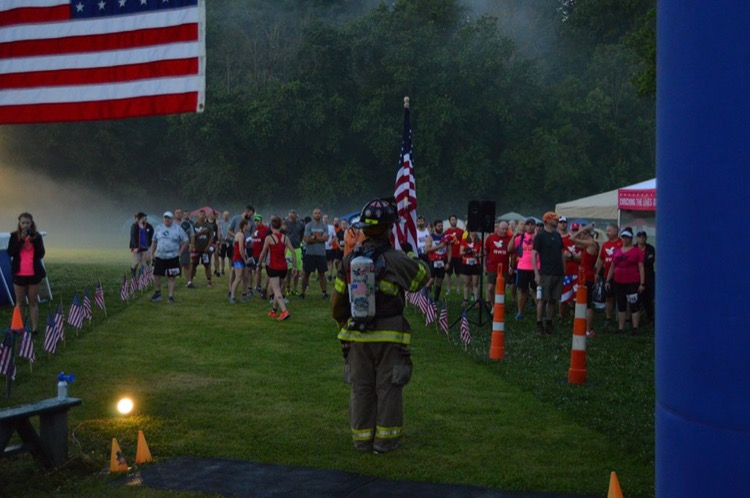 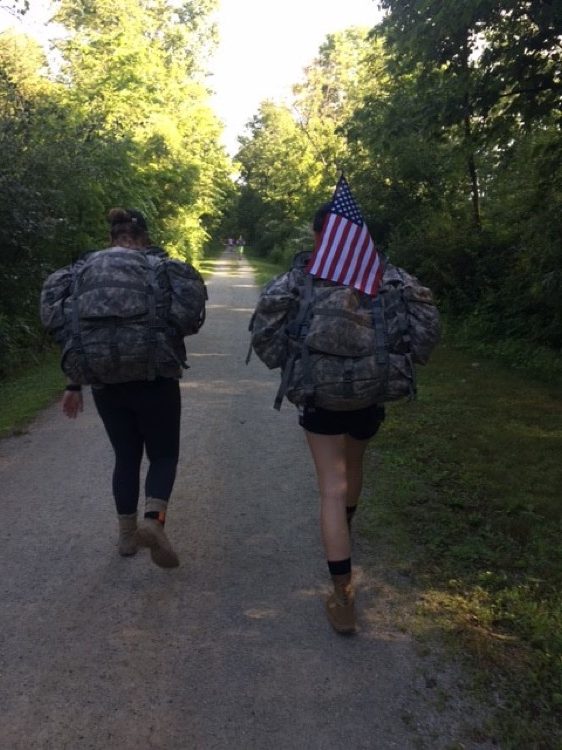 4:30 a.m. arrived quickly and the place came alive with runners crawling out of their tents. By 6:00 a.m. over 250 people were lined up at the St. Helena Heritage Park and ready to go. The first mile was a little congested because all the races started together, but for those mid-packers like me, it was good to be held back a little on the pace right out of the gate. The first three loops flew by while taking in all the other runners, walkers and ruckers out there. The course was indeed flat and 90% shaded, as promised. The course was a looped five mile path that ran alongside the Ohio-Erie Canal. The wildlife and scenery allowed runners to relax and set their pace for the day ahead.

Thirty miles in I was feeling pretty sore and met up with Ken at the back aid station. He told me to pop two Tylenol from his kit when I got back into camp. I did and then on a whim decided to try some Mt. Dew for the first time since 1994. That Mt. Dew was like fairy dust. I believe this was when I started acting really goofy for the race photographers, who, god bless them, had already photographed us all at least four times that day.

My husband texted me that I was in third. Cool, I may have a chance at placing in my age group (39 and under)! At mile 40 I was in second place, and by mile 50, first. It was then I thought to ask, “First of the women?” Nope, first overall. What?!

I was feeling great, tons of energy and no niggles or pain. Thank you, Mt. Dew. On lap ten I got to pass the famous St. Helena III canal boat being pulled down the path by two large farm horses. Very cool to see that working and to wave to the people on board. You’d think a loop course would get boring, but it wasn’t until the last few laps that I even really started looking around at the houses and things that would pop up. There were tons of people always on the course, so you never felt alone. The changing sun and shade, other runners and aid station volunteers really helped keep me interested in what was going on and kept me from getting tired at all. It was cool seeing the same volunteers and checking in with them throughout the day. It made me feel like I had a friend waiting for me at the aid stations. 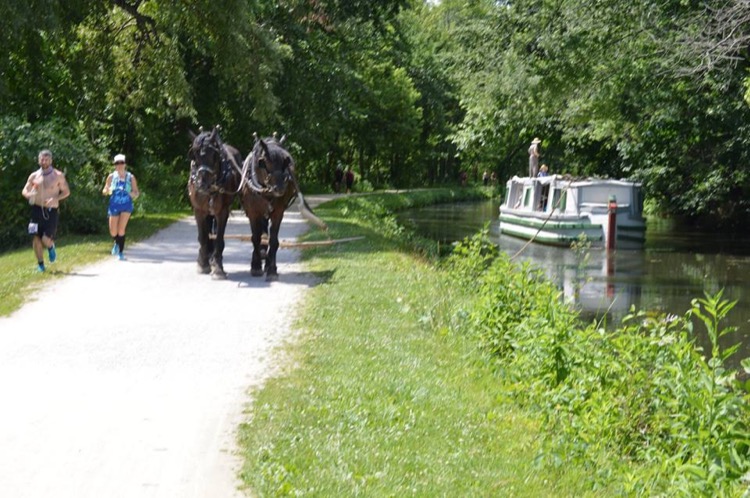 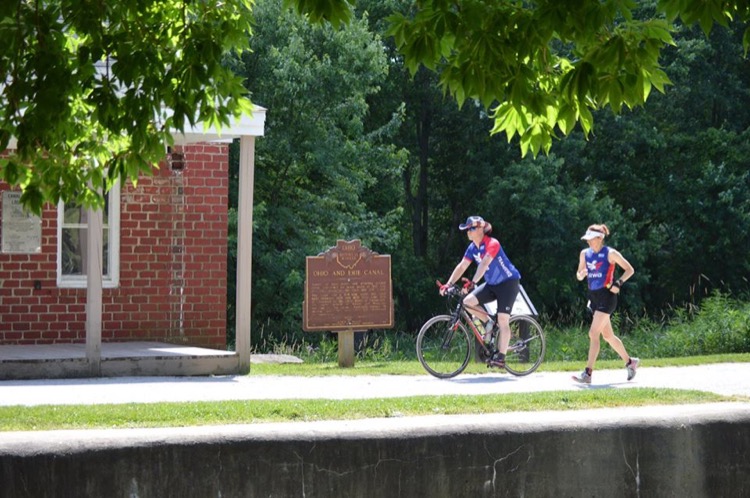 The start/finish line aid station was the best I’ve ever seen. I hardly touched anything I’d brought, instead relying on the immense amount of diverse food at the aid station. There were little donuts from Peace, Love and Donuts; pizza supplied by Dominos, a fruit bar that would make Del Monte jealous, rice balls, and a ton of things layered in tortillas. I sampled almost everything at one point, but stuck with hummus in tortillas and copious amounts of watermelon.

The RD was at the start/finish line the whole day and did a great job keeping the energy there up, talking to all the runners as they finished and helping refill water bottles. I let him know when it was my last lap and he good-naturedly told me he’d hurry up to get my buckle, knowing it would be another hour-plus before I was done.

My kids made it just in time to see me cross over the mat for the last 1.1-mile out-and-back before finishing, I also got to see the 100-mile winner coming through, Connie Gardner, and congratulate her. I finished in 12:00:10 for my first overall win. 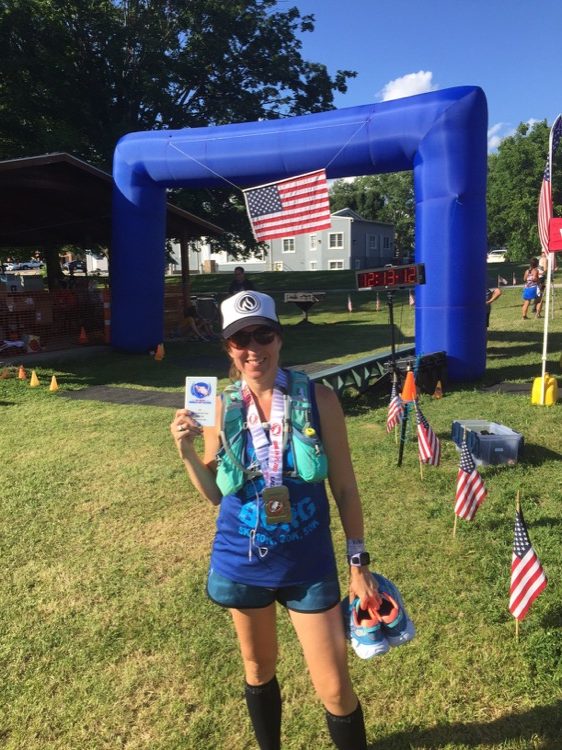 The RD did a great job showcasing his town. The winner awards were hand-blown glass plaques from a local artisan and the whole thing took place within walking distance of the downtown area. My kids, and a few runners, enjoyed jumping in the pool and hot tub afterwards to ease those achy legs. Overall, a great weekend for the women who had three overall top finishes. I highly recommend this race for those looking to set a PR or just get started in longer distances. Even mid-packers can win if we run long enough.

With the exception of being a winner, this too was my experience. I also ran in 2016, that horribly hot and humid day for the first ever Eagle Up. But that just meant the RD was watching us more closely, filing our water, making sure we fueled wisely, keeping us all safe. Eagle Up is an amazing event. I almost don’t want the word getting out but this little piece of ultra heaven deserves to be shared. Congrats on your finish Rebecca! Maybe I’ll get to meet you next year. Now to decide what distance for 2018….

Thanks, Teri! I agree that finding such a great race and RD, you kind of want to keep it a secret 🙂 Hope I get to see you next year! 100 miler maybe? Not if the machine Connie Gardner is doing it though, I’d like a sporting chance 🙂

Loved this course. Ran it in 2016…just amazing…hoping they might extend the time a little to 30 hours instead of 24….just for those of us wanting to hit the 100 mile mark!

Jamie, so glad you loved it too! A 30 hour cut off would be helpful, I’m sure! 100 miles is no joke, just praying the weather is amazing next year too 🙂