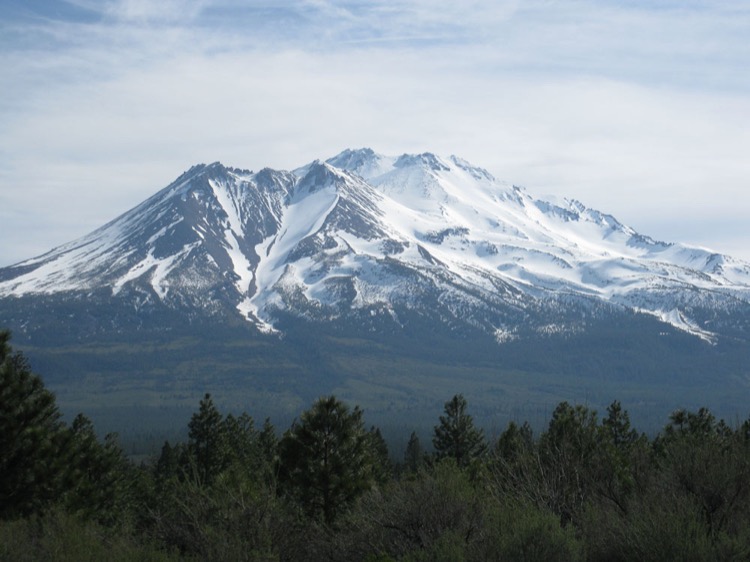 As the state of California moves through the four stages of Governor Gavin Newsom’s Resilience Roadmap, things are starting to open up across the state at varying speeds, from county to county. Bordering the state of Oregon in the northern-most part of the state is the remote Siskiyou County, home to Mount Shasta, at the southern end of the Cascade Mountain Range.

Mount Shasta is also home to what appears to be the first sanctioned race of any kind to take place in California since the Pioneer Spirit 50 Miler went off on March 14, just five days prior to Governor Newsom’s statewide stay-at-home order to help combat the spread of the coronavirus (COVID-19) on March 19.

“What really kind of incentivized me to see if there was any possible way to safely still pull this off has been the support of Public Health, Siskiyou County, and the Shasta-Trinity Forest Service,” said Mount Shasta Trail Runs race director, Ryan Spitz. 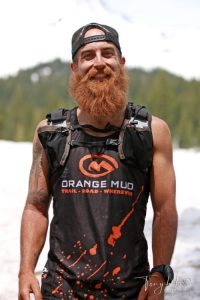 The race is scheduled for June 20 and features four distances, from 10k to 50 miles. “Knowing we can’t necessarily sit behind a fear wall forever and if we can do things safely and in a positive fashion, then I don’t see too much risk on my side.” Spitz continued, “I’m still not in a place where I naively think everyone is healthy and immune to it. I understand the safety components and what the virus can do to a person if they contract it, and I’m bringing that lens to how I’m going to be facilitating the race in partnership with public health and the Forest Service. From my conversations with them last week, we’re in agreement that we can safely get people back out on the trails in June.”s

Many of the more populous regions in California have just recently moved into stage two of the re-opening where lower-risk workplaces have been permitted to open on a county-by-county basis with specific social distancing requirements. According to the state’s COVID-19 county variance data, Siskiyou County is further along into stage two and conceivably could be well into stage three by the June 20 race date.

In the last 14 days, there has been just one new reported case of COVID-19, with zero deaths reported and only a total of six positive cases in the entire county. The total population of Siskiyou County is 43,956, much of it being very rural and remote.

Spitz is working on finalizing his robust social distancing and sanitation operational logistics plan around runner and race volunteer interactions at the packet pick-up, start/finish line area, and the four planned aid stations. He said all volunteers will be wearing masks and gloves during the duration of the event when interacting with each other and racers. Full details of the modifications necessary to hold the event will be released in early June, but he discussed some of the most pressing changes necessary to move forward.

Normally packet pick-up would be indoors at a store or brewery, but instead Spitz is shifting it to race day only, outdoors at the start/finish line with the standard six-foot social distancing requirements at the Everitt Memorial Highway/Gateway Trailhead, where the races are slated to start. For the course preview talk, he will create a video and send it pre-race to registrants to avoid large groups mingling at the beginning of the race. 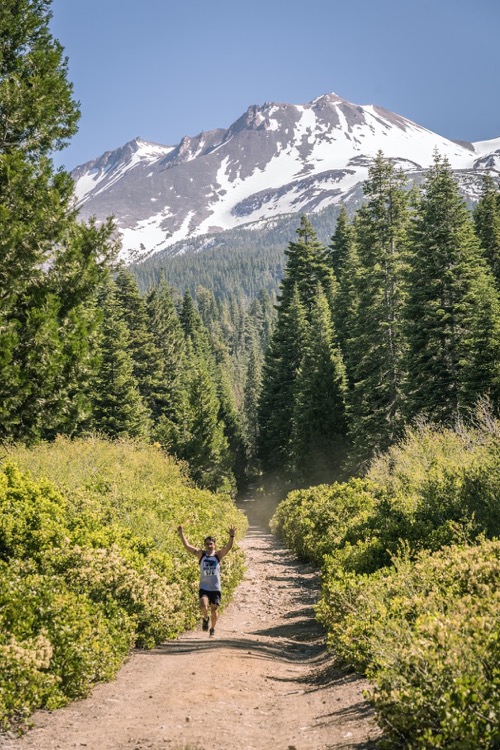 Views of Mt. Shasta from all over the course, regardless of the distance run.

“Because of the nature of the course, for the first half mile you’re running on a forest road before you hop onto singletrack, so it gives a good amount of space for the runners to spread out in the beginning,” he said.

Spitz is also ordering additional porta-potties over the norm and will provide more than adequate disinfectant available for each user, as well as enlist volunteers to sanitize them regularly.

“For this first go around, to really not put myself in a place where a sanitation step is missed and to take away the stress for volunteers, the aid stations are going to be leaner just to go the super-conservative route.” Spitz said they will have water, Coke and Tailwind, and will be serving full bananas (not cut), mini-oranges (not peeled), and Muir Energy gels that people can just grab and go. There won’t be your typical bowls of snacks out for participants and volunteers will constantly remind racers as they come in to keep six feet between each other.

To make up for the lack of options at aid stations, Spitz plans to also take drop bags to each of the four aid stations out on course for anyone who wants to, regardless of the distance they are running.

Runners will not be required to wear masks during the race, but Spitz again emphasized that his Shasta Trail Runs volunteer crew will be. Additionally, to limit the number of people out on course, no pacers will be allowed for the 50-miler.

Spectators will be allowed at the race, but they must follow all social distancing guidelines. In terms of crewing their runners from aid station to aid station, Spitz says that will not be encouraged, but he doesn’t plan to police it. 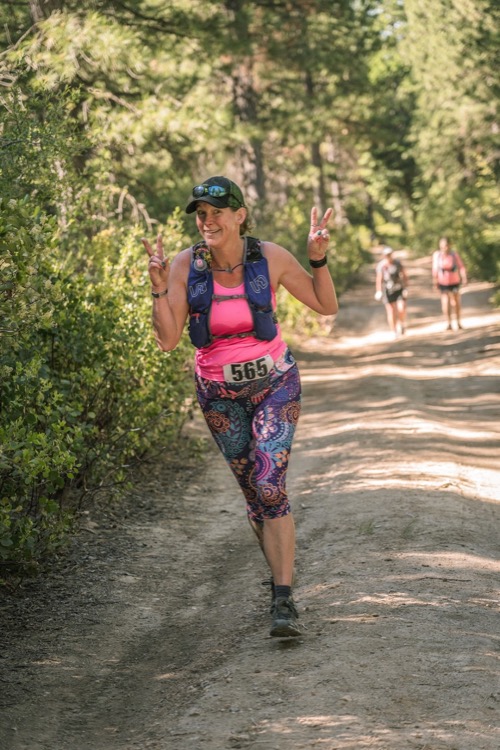 A runner at the inaugural edition of the Mt. Shasta Trail Races in 2019.

At the finish line instead of your typical post-race jovial atmosphere and conversing with friends, which he admits is often the best part of ultras, he is instead partnering with a local food establishment to provide pre-paid food tickets to runners just 1.5 miles away, in downtown Mt. Shasta. Runners can put in their food order to go, pick it up, and eat with their family somewhere in town, but not back on-site at the race finish area.

“The main thing I wanted to make sure was that we were able to have the race and get people running themselves; to forgo the finisher food and to minimize complications and issues that could come up with that.”

There won’t be a formal awards ceremony, but finisher medals will still be handed out and Spitz plans to do a post-race social media recognition for the top finishers in each race, in lieu of the customary podium which would put racers too close together.

He also stressed that the Shasta community has been ecstatic and supportive of making the races happen. Now that we’re just under three weeks away, he thinks the chances are very high that the race will take place.

“We still have a 100% green light to move forward from the Siskiyou County Public Health Department and the Shasta-Trinity Forest Service. Unless there is some unforeseen outbreak that takes over Northern California, no parties have had concern that we’re going to find ourselves in a place where this can’t happen. If done safely and correctly, we’re not concerned that this event is going to have a negative effect [on the spread of COVID-19].”

It is so great to see a race coming back. They have put a lot of thought in to the safety precautions which is nice to see. It is good they are not making runners wear masks. For 10k it wouldn’t be too bad, but 50 mile, couldn’t do it. I also like that they will be bring in more porto-potties and having a volunteer to help sanitize them. Can we just always do this. The single track trail will help keep a bit of distance between runners. For smaller races I feel this could be used as a model. Good luck to every one on June 20th. I wish I was running.
Ryan

Loco go big or go home, On June 6 is on as well.https://www.intrepidadventuresevents.com/the-loco-go-big-or-go-home-challenge

There have been 2 additional cases of covid since this article was published. There are ZERO local ultra runners running this race. The locals love tourists, but we want this race postponed. That, and he leaves all the damn marker flags up after the race.
Ryan doesn’t have a problem having the race there because he doesn’t even live there.