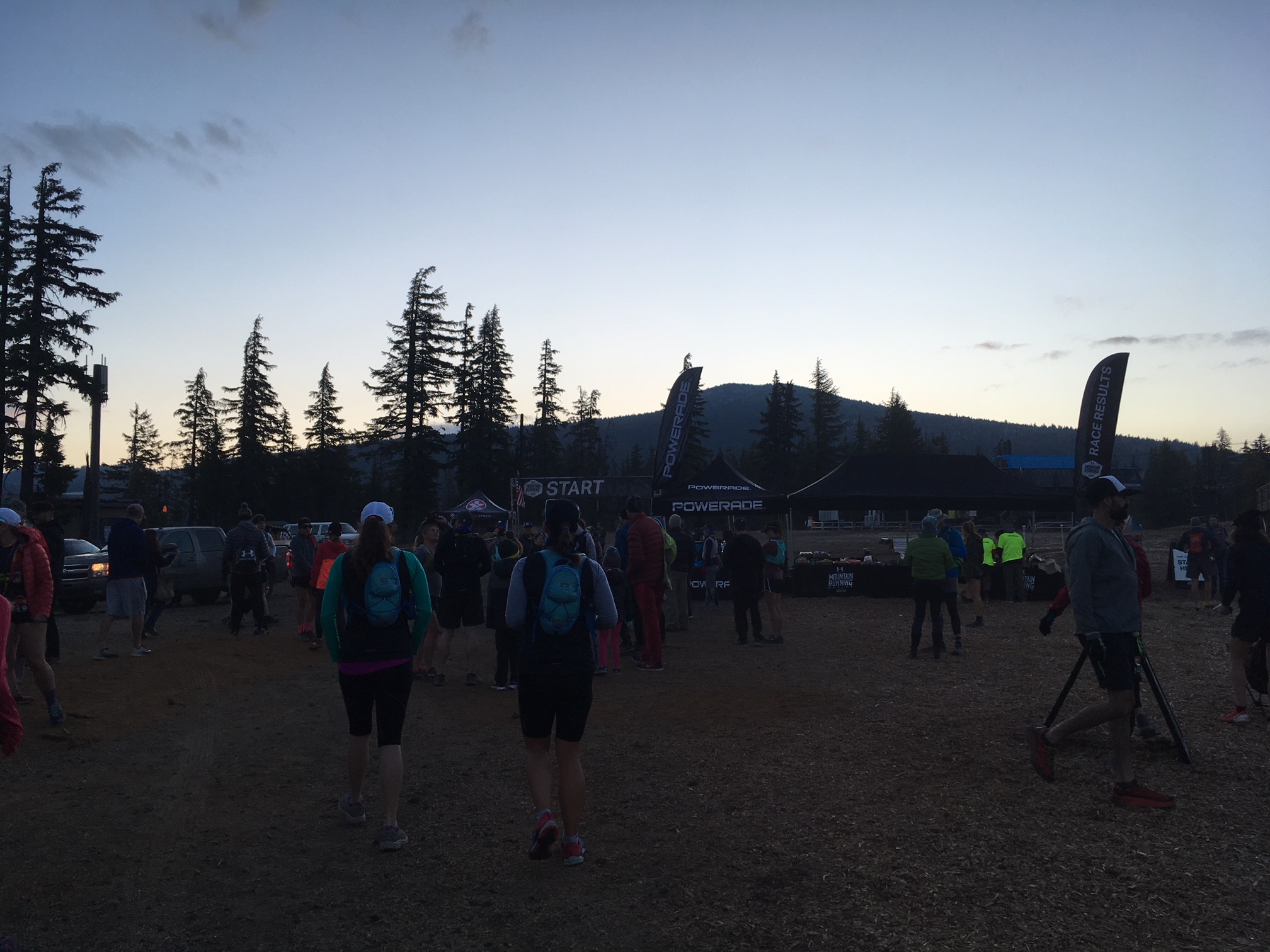 Runners gather at the start before the 50K at Mt. Bachelor Ski Resort. Photo: Amy Clark

As the last stop in the Under Armour Mountain Running Series, the 50K at Mt. Bachelor Ski Resort was the perfect event to kick off fall racing season in Central Oregon. With morning temperatures hovering around 30 degrees, runners had no choice but to don their winter gear at the 7 a.m. start. As the sun came up, most jackets and gloves were thrown to the wayside, but that didn’t stop Mother Nature from keeping the mid-September day from feeling like summer was long gone, and winter’s just around the corner.

Known to ultrarunners as the Flagline 50K in previous years, Under Armour acquired the race as part of their 2018 Mountain Running Series, which also held events in Colorado and Vermont. With almost 4,000 feet of elevation gain, the course navigates trails shadowed by Mt. Bachelor and nearby Tumalo Mountain. A dense canopy of fir and lodgepole pine trees kept runners cool for most of the day, while winding through old growth and subalpine terrain. Descending to 5,800 feet in the first 10 miles, the course topped out at around 7,000 feet three times before the finish. Significant climbs included a four-mile stretch with approximately 1,000 feet of elevation gain.

While the Series is directed under a corporate name, the race felt mostly local. Aid stations were dominated by volunteers from the Bend running community, all of whom were welcoming with smiles and assistance at the ready. As promised, gels, chews and waffles were available along with electrolytes, water and Coke, while the average ultra fair of peanut butter and jelly sandwiches, fruit and Oreos were noticeably absent. However, runners who perfectly timed the self-serve aid at mile 23 were treated to fruit kebabs and chocolate-covered bacon by a trail angel who continues to remain anonymous.

As the clouds rolled in, it wasn’t long before Mt. Bachelor came back into view and the finish line announcers could be heard from across the highway. The winding trail continued until the Dutchman Flat Parking Area and from there, a major crossing at the Cascade Lakes Highway landed us back at Mt. Bachelor with yet another half mile up to the finish line at the West Village Lodge. Upon arrival, finishers received a medal and a local microbrew, and enjoyed Under Armour’s post-race festivities.

Winners of the 50K (top three male and female) all received cash prizes, and Under Armour provided registered runners with long sleeve shirts and a free chairlift ride. Other events of the Mountain Series included an 18K that circumnavigated Mt. Bachelor, 10K and 5K – with each distance being a unique mix of trail and mountain running.

As the final 50K runners found their way to the finish, I attempted to track down my gear that had been dropped at the first aid station. A few friendly faces made sure I found what I was looking for – a good reminder that volunteers helped make my day on the trails just a little bit easier.