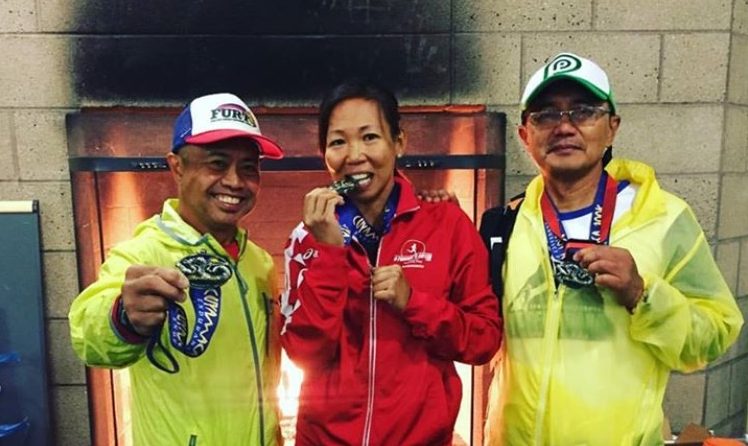 Mission Accomplished at the Cuyamaca 100K

A sign on the trail read, “Your body can stand almost anything. It’s your mind you have to convince.” That was an awakening-sign near the summit of Cuyamaca Peak after a grueling, long ascent through two aid stations.

The Cuyamaca 100k Endurance Run course is mostly within the boundaries of Cuyamaca Rancho State Park about an hour east of San Diego. It is comprised of three different loops that converge at the start/finish. Runners accessed their drop bags at the end of each loop. Each loop’s flagging was color-coded orange, blue or yellow.

The first and longest loop was a race of its own. It covered 32.3 miles to the park’s highest point, Cuyamaca Peak at 6,500 feet. My training buddies, Rowell and Peachy of Team FURT (Fil-Am Ultra Running Team), joined me for the race. Both had trained religiously for their first 100k, and I expected them to do well. My goal was sub-18 hours; the cutoff time was 19 hours.

The first eight miles were mostly single track undulating downhill, which kept the pack tight and social. It worked perfectly for my usual backpacker-pace enjoying the landscape and mountain scenery. Thereafter, the sound of silence filled the air as runners began the summit conquest. The tight pack vanished quickly. After refueling at Green Valley aid station at mile 14.2, the grind began. The next nine miles of ascent was intimidating. Thus, I made small goals and divided this section up into three parts. I didn’t mind being passed. The temperature started to warm up. With less than two miles to the summit, I caught up with others, which boosted my confidence. The written signs a few yards from the summit provided added lift.

On paper, it appeared like the storm was over after Cuyamaca Peak. There were still forty miles of running left. The descent required eye and foot coordination plus balancing on very rocky single track followed by vast meadows of rolling downhill until the first loop concluded. Volunteers were very assistive in handing drop bags as well as other needs such as food and hydration. This was typical at all aid stations.

The second loop was a short 12.6 miles with one major climb. The course ran through the southeast corner of the park. The afternoon temperature was hot but luckily not in the 90s. I was well within my goal and slowly reeling in runners. Noticeable upon my return to the basecamp were runners being carefully attended to. Some couldn’t continue due to physical or health issues. The night section on this course is always cold and windy. I changed my shirt, wore a windbreaker and flashlights, downed two cups of hot chicken noodle soup and carried a slice of spam and cookies. This is it, eighteen miles to go.

After picking up my yellow bracelet to signify I was on the final loop, I headed to the meadows until darkness fell. Some runners were now accompanied by their pacers. The last loop covered the northern section of the park, Anza Borrego and the Pacific Crest Trail overlooking amazing desert views before returning to the south to finish. My legs were tired from shuffling, running and walking. Rocky trails tripped me a few times causing my goal time to fall behind at the last aid station, Pedro Fages at mile 56.5 with 6.8 miles to finish. I gathered myself and slowly got into a rhythm again to finish in 17:41:56.

My mind was convinced. Mission accomplished.