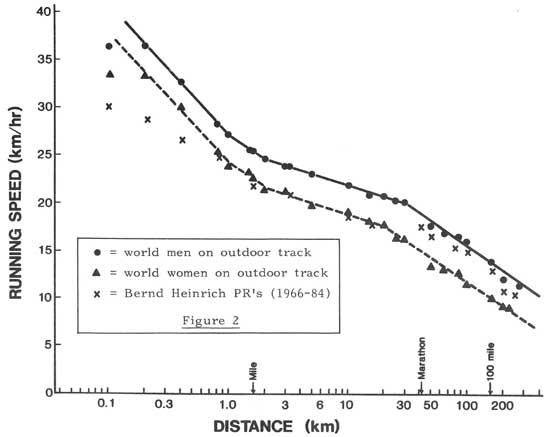 Men vs. Women, Marathoners vs. Ultramarathoners

In 1976 Joan Ullyot, M.D., the “running doctor” from San Francisco, wrote an influential little book titled Women’s Running. In it she claimed that although men have more speed and are better sprinters, women are biologically better endurance runners than men. This claim received much coverage by the national media, and it is still commonly accepted by many as fact. The logic of the claim is simple: beyond 30 kilometers glycogen reserves become exhausted (Costill, 1976) and since distance runners burn fat and women have more fat than men, women will be better at longer distances.

I decided to examine the question whether women are superior distance runners by consulting the world records. (I assume that the world records give close to the best human performance under ideal conditions.) In order to make comparisons more valid I used records set on the track to eliminate possible uneven performances due to grade (such as the net 490 foot drop at the Boston Marathon) and potential aiding by wind (70% chance at Boston). If women have a relative advantage over men at longer distances, then the longer the distance the closer the best female performance should be to the best male performance.

The results are opposite to what is predicted: the longer the distance, the greater the relative difference between male and female performance. On average, the fastest males cover distances from 50 yards to 100 miles 9% faster than the fastest females. However. at distances between 400 meters and 2 km, males are 11% to 16% faster than women, and from 50 km t.o 250 km, the male advantage has increased to over 30% (figure 1).

In order to gain some insight. into why males are relatively more favored over females at longer distances, I plotted the average running speeds of records set by both males and females as a function of distance (using a logarithmic scale for distance). As everyone would expect, average running speed decreases with distance. Nothing new here. The patterns of decrease, however, may be instructive. They tell us something not only about the reason for the male advantage. but also something about ultrarunning in general.

I compared world and American records. A somewhat surprising finding. first of all, was that American women’s records average a relatively constant decrease of speed relative to men: at all distances from sprints to ultras, the fastest American women average approximately 3 km/hr slower than the fastest men. On a worldwide basis, however, the records indicate that American women are not quite up to their biological potential in the sprints, while the American men are not yet. quite up to their potential in the ultramarathons. Worldwide the best women have run 2.6 km/hr slower than the best men in the sprints, and 3.7 km/hr slower than the best. men in the ultramarathons. If world records indicate the ultimate limits of human performance, then these data show that men have a distinct advantage over women at the longer distances.

The percent of decrement of women relative to men becomes proportionately greater the longer the distance for quite another, indirect, reason. For the sake of argument, I will assume a similar speed decrement. between men and women with distance. For example, at 200 meters if men run at 36 km/hr, then the performance of women is 33/36 = 92% that of the men. But at 200 km, where the men’s record is 12 kmlhr, the same 3 km/hr slower running speed of women would give them only a 9/12 = 75% performance relative to men. (The actual decrements 2.6 and 3.6 km/hr, respectively yield performance decrements of 93% and 69% at 200 meters and 200 km, respectively.) In other words, women have sprint performance almost (92%) on par with men, but at long distances their performances so far show a decided disadvantage.

The similar shapes of the curves of speed as a function of distance for men and women (figure 2) may also say something about the limits of physical performance. For example, the speeds at distances of 100 meters or less fall below the extrapolation from speeds at 200 meters to 1 km. This is obviously because in the very short sprints it takes time to build up momentum before maximum speed is attained. (The effect of momentum is also apparent in comparisons between indoor and outdoor track records (figure 3); without exception. comparable distances are covered in faster times outdoors on the larger tracks with fewer curves). The strong decline in speed at sprints between 200 meters and the mile is probably a physiological effect due to buildup of lactic acid from anaerobic metabolism by fast twitch muscle fibers that is accompanied by the sensation of “tying up.”

At near 1 km the slope of the curve suddenly becomes much less steep because a different limiting physiological factor is added to those already existing. There is a limit to how much lactic acid can be allowed to accumulate. That limit is quickly reached during sprints. For longer distance, there is a switchover to aerobic metabolism using slow twitch muscle fibers. These provide less immediate power than anaerobic metabolism. but they give off less lactic acid. The aerobic metabolism taxes the heart and circulatory system instead, and maximum oxygen uptake now becomes the single best indicator of performance (Costill, 1976). although it is of no consequence in the sprints.

Beyond the marathon additional limiting factors come into play. We now notice that the slope of the speed curve again becomes steep, presumably reflecting new and yet unclear limiting factors, possibly related to changeover from carbohydrate to lipid metabolism, which runners experience as “the wall.” The wall is commonly experienced between 10 and 30 miles, depending on one’s training. If the wall is the depletion of glycogen reserves and the subsequent use of lipid as fuel, then one way to increase endurance is to develop greater storage capacities of carbohydrate, including prerace carbo loading. This method, i.e., continuing to rely on carbohydrate for fuel, can allow for continued running at a fast speed. Running at high speed, such as interval training, in turn develops the enzymes for carbohydrate utilization. The marathon is still within reach of the carbohydratebound high speed metabolism, and so the best way to train for it is to force reliance on this mechanism, through speed-training because it gets you to the finish line the
fastest.

The price of relying on carbohydrate metabolism. however, is that the wall is always imminent. By training, one can postpone the wall to the marathon, or beyond, but it cannot be eliminated. Only lipid metabolism will carry you far beyond the marathon into the ultradistances. Indeed, preponderance of lipid metabolism is essential to running beyond 50 miles. Those who commit themselves to lipid metabolism, however, face another limitation — speed. Utilizing lipid, unless one is highly trained for it, is like sipping through a very thin straw out of a very deep reservoir: there is always enough, but it never comes out fast.

There are three situations that would tax or train the lipidproducing enzymes:
1) high-fat, low-carbohydrate diet,
2) starvation,
3) very long runs that exhaust the carbohydrate reserves (a form of forced starvation).

The three different physiologies sprint, middle-distance, and ultradistance (50 miles and longer) are obviously extremes. I suspect a specialist will be better at a specific distance than a jack of all trades. Indeed, no one runner has yet set a record in two of the three categories as they have been defined by the three different slopes of the running curve, although many runners dominate many events in one of the three categories.

Are people innately suited to one type of distance, or is it all a matter of training? At different times I have trained hard for “sprints” (400-800 meters), marathons, and ultramarathons. I have plotted my own lifetime best times at these distances (figure 2). The results Show that my ultramarathon times (50 miles to 156 miles) do not fall on the same line as for the middle distances. That is, my middle distance times are inordinately slower than what a linear extrapolation from the ultramarathons predicts. Possibly I was burning lipid in both, giving me excellent ultra times, but only fair marathon performance. Relative to the success of others, even when fully trained I have made the poorest showing at the shorter distances. Significantly, the same three breaks in the slope of the curve show up.

The graph shows different physiological capacities trained in turn, and so it probably is a good indicator of my personal potential and its limits. Although quantitative measurements are not available, I am confident that my sprint speed is lower than the graph indicates when I am training for ultramarathons, and my endurance is low when I am fully trained for shorter distances. In other words, I believe that training for ultramarathons makes me slow (relative to marathons) and speed training will reduce my maximum endurance.

To summarize: The data show that a marathoner is basically the same species as a 10 km runner. A world class miler is either a long sprinter or a short marathoner, but a world class ultramarathoner he will likely never be, and vice versa. Physiologically, there are sprinters, middle-distance runners. and endurance runners. Men’s and women’s records reflect the same three types of physiologios, but women possibly have an additional biome-chanical disadvantage that limits speeds and affects performances at all distances. This disadvantage accumulates at longer distances to give women poorer performances relative to men.

Yes, but in 1985, when this article was originally published, there weren’t that many women running distances. So contrasting times from that era doesn’t really say much.