With virtually all springtime races canceled due to COVID-19, we ruminated about what races would look like when the restrictions were lifted. No crews, no spectators, no pacers, maybe self-serve aid stations (with food wrapped in single-serve portions – no more bowls full of M&Ms or pretzels). There might be rolling starts to avoid starting line congestion, with chip timing used as the official time. On single-track trails, runners are almost always well outside the six-foot distancing guidelines. It’s actually pretty hard to follow that closely and still be able to see the rocks and roots on the trail.

“Hey, we could do something like that,” my wife Lisa mused. “Just make everyone run solo.” With that, we hatched the concept of the MayDay! Solo 50K, to be run Fat Ass style on May 1. We laid out a course: one big loop around the west end of Sedona, AZ, where the trail system among the famed red rocks is well-suited for such an event. We dropped water and ice at three trailheads, and set up a mini self-serve aid station on the front porch of veteran ultrarunners Kerry Owens and Doug Sullivan’s house, which is conveniently only about 100 meters from the trail at the halfway point. (Locals are now referring to their home as the “Halfway House.”) 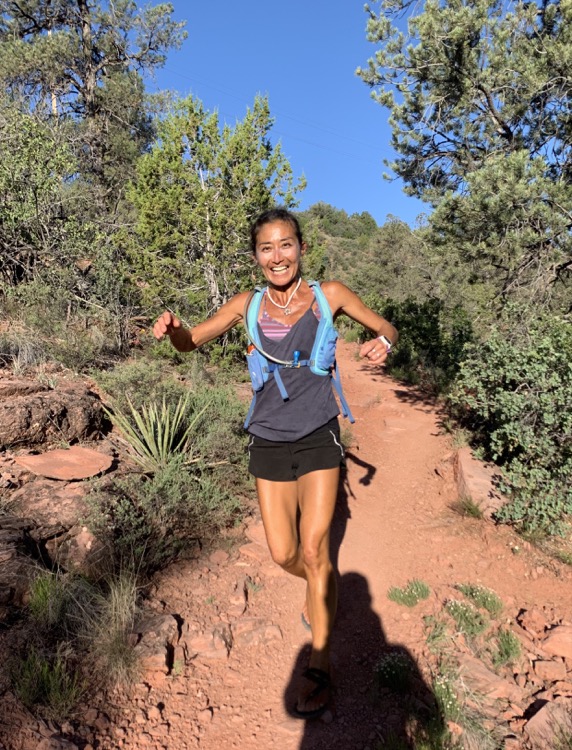 Both Sedona and nearby Flagstaff are filled with ultrarunners, and our self-imposed 25-runner limit was filled in two days, essentially by invitation. Runners were told to run solo (the only exception was that you could run with someone you shared a household with) and to start whenever they wanted. We weren’t going to spring for chip timing, so Strava uploads would serve as each runner’s official time (and proof that you had run the prescribed route).

It turned out that the day of the run was in the middle of a heat wave, so most runners started very early, some even before dawn. Not Tim Freriks, though. Freriks, an ICU nurse at a COVID-19-filled ward at Flagstaff Medical Center, had worked the late shift the night before the run, so he didn’t start until 5:30 p.m. By doing so, he missed the worst of the heat (91 degrees), but also had to run the last 10 miles in the dark. But, by the time he started, he also knew what the other fast guys had run and what time he needed to beat.

Jim Walmsley and Jared Hazen are roommates and ran more-or-less together, finishing in 3:54. A short while later, Drew Frehs—fresh off a win at the Coldwater Rumble 100-miler—also came in at 3:54. They were the leaders in the clubhouse. But 12 hours later, Freriks posted a 3:49. As any baseball fan knows, it pays to bat last.

Tina Bentrott, who splits her time between Sedona and Washington state, was well clear of the other women, finishing first in 5:41.

To be fair, it was more of a tour than a race and most folks were just running, not really racing. But, for the first time in weeks—a hot Friday on the first day of May—the world felt almost normal again, and it was a welcome respite from seemingly endless house-bound isolation. And it seems most fitting that the fastest finisher is the guy whose life is completely immersed in the pandemic. Our own local hero won the day.

Running Sunglasses for All Conditions

From the Archive: One Mile Per Hour Isn’t So Difficult – or Is It?