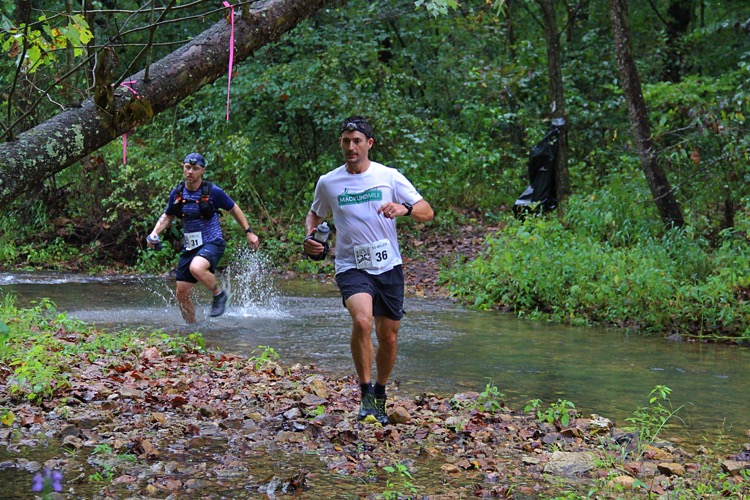 It was 6 a.m. on Saturday, September 17, at the Berryman Campground, and the rain had finally cleared for the start of the 5th Annual Mark Twain Endurance Runs. Due to the previous day and night of severe weather, which dumped inches of rain on the course and campground in southeast Missouri, the start of the 50- and 100-mile runs was marked by high humidity and a wet trail. The 28 athletes attempting the 100-mile trek, and the 44 gearing up for the 50-mile run, knew, as race director Gary Fuerst cautioned at the pre-race briefing on Friday night, that “taking care of your feet” would be paramount for a safe and successful run.

On a positive note, the 25-plus mile Berryman Trail loop (a spur of the Ozark Trail) maintained the structural integrity of its 99% single-track path over mostly rocky ground. With that said, one significant water crossing at Brazil Creek (mile 9) turned into many smaller water crossings everywhere on the course as typically dry creek beds filled with water, offering a great challenge for runners. In the end though, “foot problems” led to many of the 17 DNFs for the 100-mile run, allowing for just 11 finishers.

For 99 miles, the race looked like it belonged to Jennifer Halls. Early on through the first half of the race, Halls held a narrow lead over 2015 champ Amber Rustemeyer as they finished loop two just under eight minutes apart. Halls was then through 75 miles with a two and half hour lead as Rustemeyer dropped near mile 60.

But another Jennifer, Jennifer Rolfing of Oak Creek, WI, who started the race with her fiancé Sam Crahan (they were recently engaged at the Mohican finish line in June), proved herself over the course of the full 100 miles. It was a story of hard work and determination. When Crahan dropped at 50 miles, Rolfing had to push on without him. She clocked a tough third loop in 9:41, meaning she had about 8:30 to finish the race under the 32-hour cut-off. She found herself a distant third, trailing behind then-leader Halls by nearly four hours. But Rolfing stayed calm and confident.

In the end, the final loop was Rolfing’s story. As we all waited to see which female runner would emerge from the woods near the finish at Berryman Campground, we first saw M6 George Jacobs. But, right on his heels, we also saw Rolfing, going strong, sprinting up the hill. In the final seconds, Rolfing passed Jacobs, and crossed the finish line F1, against all odds, into the arms of her fiancé Crahan.

Rolfing’s triumphant effort to take first was highlighted by making up four hours on Halls over the final 25 miles, and improving on her third loop by 2:23 to finish the fourth loop in 7:18. It turned out Rolfing ended up passing Hall near mile 99.

Eighteen minutes later, Cheri Becker, who had also just passed Hall on the final hills, finished second. Just over one minute later, Hall, who had a magnificent race, finished third.

In the men’s 100-mile run, Dan Riefenberg of Fox River Grove, IL, (one of five 2016 Ouray 100 finishers) was leading coming into Berryman Campground at 50 miles. Minutes later, Jason Wagner, Eric Buckley and Mike Christiansen all came in, which meant there were four in the hunt together halfway through. The race was on.

Jason Wagner of Crestwood, MO, fought through the third lap and came in with a sizeable lead. Of the other three leaders through the first loops, only Riefenberg would make it past 75 miles. Wagner continued to grow his lead in the last loop, winning by a margin two and half hours over Riefenberg and coming in as this year’s only sub-24 finisher at 23:17. This was Wagner’s first 100-mile victory and second MTER 100 Mile finish. Cortland Wheeler rounded out the podium with a strong effort on the last loop to secure third place.

In the men’s 50-mile race it was Travis Redden leading the way through 47 miles before he was caught by Imperial, MO’s, Brandon Vaughn and then Jason Crites. Vaughn sprinted through the last miles to claim victory in his first 50-mile race in 9:21. Crites finished runner-up minutes behind Vaughn while Redden held on for a third place finish.

On the women’s side, Yanzi Liu of Edwardsville, IL, won her debut 50-miler in an impressive display, leading from start to finish in a time of 11:22. Stacey Hagen and Claire Reinbold rounded out the podium, finishing F2 and F3 respectively.

We were able to partner with the good folks at the Pacific Meramec Valley Amateur Radio Club and Sullivan Amateur Radio Club to provide communication and near-live runner updates through Twitter (IRunFar style!), which was a first.

Again, it was the volunteers and great support on the course that made the weekend possible and helped the runners through to the finish. We continue to make the focus of the weekend all about the runner!