Lost Tracks: Could Your Favorite Trail Be Lost Forever?

Think about your favorite trails. Do you know who owns the land they wind through?

Most likely, especially in the West, you own it – along with me, the editors of this magazine, your cousin and every other American. That’s right – you own Handies Peak, Robinson Flat, a whole bunch of the Tahoe Rim Trail, and tens of thousands of acres of wildflower meadows, mystical desert, rimrock canyons and lush forests. A lot of trail running happens on public lands – lands owned by all Americans and managed for us, with our input, by the federal government. Why should this matter to you? There is a movement in the current political climate to dispose of public lands. This means your favorite trail or race course could be lost to you forever, fenced off with a “Private Property: No Trespassing” sign for the new owner to do as they like with it. It may sound dark or dramatic, but it is already the case in many other countries and is now within the realm of possibility here in the US.

What exactly is happening?

Well, it’s complicated but hang with me. Most public land is managed for sustained “multiple use.” This means federal agencies (with public input since it’s our land after all) plan and implement a spectrum of uses such as preservation, recreation, logging, grazing, drilling and mining. A movement known as the Sagebrush Rebellion, beginning in the 1970s and resurfacing more violently in 2016 with the armed occupation of the Malheur National Wildlife Refuge in Oregon, rejects this model of federal control. The desire for the federal government to dispose of public lands by transferring them to state ownership is not only the doctrine of Sagebrush Rebels but is also now a popular agenda for the current Congress and administration.

So why would they want to do this? The mindsets behind objections to the current public lands model vary. For some, it’s radical opposition to governmental control in general. For others, it may be the belief that federal agencies are Washington, D.C.-centralized “absentee landlords” who have neither the knowledge nor manpower to manage the lands. In reality, public lands decision making happens at the local level through field offices led by local agency supervisors and managers along with residents’ input, but I digress. For elected officials, objections to the current model may be about a desire to push resource extraction (e.g., oil, gas, timber), land development or other economic agendas (grazing, etc.). 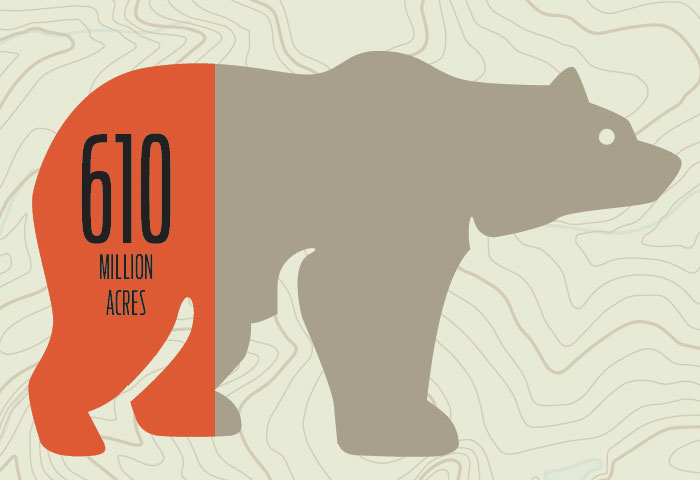 These positions have gelled toward a political push to dispose of public lands by transferring them to states. This would be a means of shifting control from federal to local authority and loosening restrictions on land use. The problem with this approach is that states do not have the budget to manage land for multiple uses that the federal government does, nor are they mandated by law (as the federal government is) to consider public input in land use planning. As a result, the most profitable short-term use of the land would be prioritized when feasible (i.e., logging and mining beat out trails). Or worse yet, the more likely scenario is that states would be forced to sell the land to private ownership to replenish state coffers. That is what has happened time and again with state-owned land across the West and this is where the threat to our trails comes in.

We can do this, fellow trail runners!

The current administration and Congress have initiated a flurry of actions to pave the pathway to transfer public lands, reverse land protections and favor extractive industries. The bad news is some have been successful and more will surely follow. The good news is, public outcry has stopped some of these actions cold (H.R. 621 from Utah Rep. Jason Chaffetz is an example) so we do have some power here, but only if we make ourselves heard. We love our trails and we will stand up for them! Here’s what you can do:

Call your senators and representatives and tell them you support keeping public lands public. If you learn of specific issues in your state pertaining to public lands, call again. Tell them your name, where you live and why you care about this issue. Be brief and to the point but honest. This does have impact.

Get involved with local organizations that take care of your public lands and trails: a conservation group that does restoration work, a “Friends of…” group that works on advocacy for protection, an environmental org doing educational outreach. Pick a flavor –
they’re all good! Even if you only have an hour a month. It all helps.

Go to trail work parties. Keeping a trail in runnable condition requires a shocking amount of work and if you use trails, you’ll earn good karma for giving back.

Stop by or call your local USFS or BLM office. Tell them you spend a lot of time on local trails and ask if there’s anything you can do to help while you’re running. There may be a trail they don’t have staff to monitor and could use intel on downed trees, washouts, overgrown brush, illegal campfire rings or structures, etc. All of this can be incredibly helpful to them and make our trails safer and more enjoyable.

While interacting with your local USFS and BLM, ask them how you can be added to their requests for public comment notification list. This is how you get to participate in their planning process and advocate for using public land for trail systems over other uses.

Check out Run Wild, a coalition (including elite ultrarunners) helping to organize and educate trail runners in support of public lands. Visit runwild.live for more info.

Spread the word. The more of us who make our voices heard in support of public lands, the better chances we have for keeping them public.

Our nation’s public lands are intended for the enjoyment of all Americans. You own them. I own them. The federal government takes care of them for us so that we can all play on them and benefit from their resources. This is a unique and special attribute of the US and is not seen in many other countries. We have access to an unbelievable array of beautiful places throughout our country anytime we want. How awesome is that?

Let’s work together to keep it that way.

My wife Christina and I became involved in the campaign to designate the Greater Grand Canyon Heritage National Monument with a short film in collaboration with the Sierra Club in late 2015. Our connection with public lands in the southwest is deeply personal. It was heartbreaking when this area was passed over for designation and the outcome of the election took the wind out of me.

The designation of Bears Ears National Monument at the time was a bright spot in dark times. Falling in love in exploring its deep canyons, I found hope when I was most lost. This personal connection exemplifies the importance of protecting public lands from greed and shortsightedness. Bears Ears has become a political pawn and I feel ready to speak up and make my voice heard, fighting to keep our lands wild and free.

As trail runners, we often take the places we run for granted but the ability to access these lands is a privilege. The freedom to run on our public lands is something that could slip from our grasp at any time. Last year the majority of the 3,960 miles I ran was on public lands in Oregon. This is my sanctuary. Our public lands belong to us and they are our responsibility to care for. If they are sold off and become private lands, they could become a parking lot. Not a land free for us to use. I cannot imagine a world without access to these special places.

So what can we do? Speak up. Bring awareness to the issue. Give in any way you can. Become active in your local community. Participate in trail stewardship. Fight the good fight, and never ever take one step on public land for granted. This is our land and we have a duty to protect it and keep it for generations to enjoy.