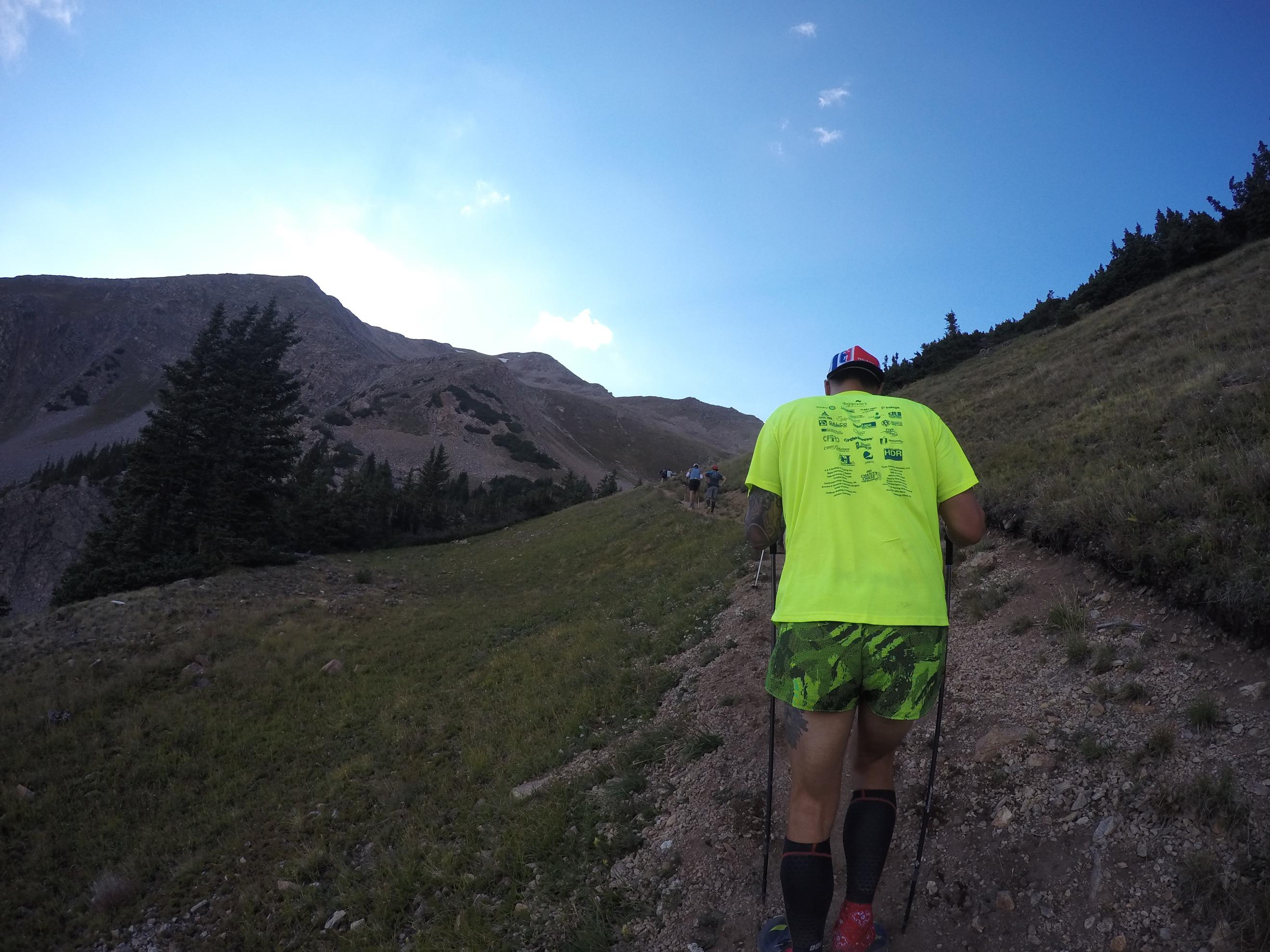 This year has been a year unlike any other year and it is not even over yet. For me though, the big challenge was retiring from the US Army after 21+ years of service. Just that idea itself is epic and huge, but not unlike what has been done millions of times before me by other great veterans like my father. For me, it is really the past and looking back isn’t something I am necessarily good at doing. I have been programmed, as most of us, to always look at the next mountain, the next obstacle; look forward, set goals, and make it happen. However, I really want to take a brief look back at my birth in running and compare that to my career in the Army. I think there are some life lessons there that many others might appreciate. Looking back is the easy part because, for most of us, it is either a good or bad reflection that we have stored away in our long term memory. Some of us may have chosen to delete it all together, but it is still there. So let’s take a little journey back and see how we can better look forward or prepare for the unknown – because in running we embrace that fear of the unknown.

The past started in 2014 when I underwent reconstructive ankle surgery. I was at the peak of my mediocre CrossFit career and thought I was the next coming of Rich Fronning (a famous crossfitter), however I was older and, well, much older. So after years of rugby, CrossFit and jumping out of perfectly good airplanes, my ankle decided it didn’t want to work anymore. It had determined that it was time for surgery. So I underwent an ankle reconstructive surgery and became a new man. I ate so much junk food for a month. I got fat and was wondering where I was headed. Would I be one of these people you see that take it sitting down, or would I get up and fight this? You can guess where this is going. So I started rehab and I cut out all the junk food. Then I got an unexpected surprise to go to Germany and work for six months. While I was there one of my peers was a “runner,” so we would talk about running sometime if we found the time.

As my rehab went better, I really wanted to get out there and push myself to see what my ankle could handle. I was tired of the treadmill and the elliptical machine and needed trails or asphalt! So we started making plans to run the local German trails around base. They were beautiful and the weather in Germany is always one for running; it reminded me of Seattle. We ran over many lunches and I got to where I could run a 10 minute, then 9 minute, then 8 minute, then 7 minute pace for several miles. I felt recovered and healthy. It was a good time and place for me. However, I still hadn’t been bitten by the running bug. This all happened when I got back from Germany. Looking back, this was a very important period for me. I could have continued on my current course of using machines to stay fit. I could have continued to rely on processed foods and not cooked as much. I could have put my headphones on and shut out the world as I saw fit. However, I didn’t. I got off the couch and went for a run. I met friends on the trail. I experienced a beauty and freedom that only running can give you and then I felt like a new person. This is how I came home from Germany.

When I got home from Germany I thought I was done with running and would slide back into my CrossFit gym and push on to be that guy who didn’t run from the enemy cause I was bigger, badder, etc. However, it didn’t work out like that. When I got back I still reconnected with friends from the gym but I needed to be outside and needed the sun, fresh Colorado air, and this freedom. One day around Thanksgiving or Christmas, my friends who had run this crazy 100 mile race called Leadville told me I should sign up. I think I laughed harder than they would have imagined. My friends had each tried it twice and not finished and this was their third year entering it. It was one of those epic feats I wasn’t exposed to before, so the mere thought of 100 miles made me laugh. However, I went home and thought about it and thought back to who I was and what I had become in the Army. Was I content and happy with being this desk jockey?

I thought back to 1998 when I entered the US Army Best Ranger Competition as a complete nobody from Ft Drum, New York. I wasn’t predicted to do anything much at the renowned competition, but expected to put my best foot forward. What we did was finish the event where over half don’t. Each year 50-60 teams of two rangers from every unit around the military compete to see who is the best. I was happy then to just finish, but I never would have finished had I not gotten to the start line or volunteered. So I signed up that night for the Leadville 100 and went to bed. When I was in Jamaica in early 2015 with my soon-to-be wife, I got an email that said something to the effect that I had been selected to run in the Leadville 100 Trail Race. I thought “what had I done?” Looking back, I can tell you exactly what I did. I changed my life for the better. I got out of my comfort zone and sought out new challenges that you can’t find on any couch or TV program. It was a turning point in my life but I was still a novice. I didn’t know what I didn’t know. But I made the first step in my new life: I toed the line and accepted what came ahead; of course I had no clue what was about to happen, but “here we go,” I thought.

Getting to the Leadville 100 was half the battle, but it was a serious climb for someone who had never run an organized race longer than ten miles. As soon as I got home from Jamaica and the rum wore off, I was hitting the paths and roads of wintery Colorado. I was learning to run on ice and in snow. I was reading and absorbing so much information about running that I was the gadget guy. I had a shoe, a piece of kit, or a trick for everything. I had different bottles, bladders, gels, and drink mixes. I was like a mad scientist trying everything but what this did was: 1) Cost me a lot of money catching up with people who had a kit and had been running for ever. 2) Forced me to really look at a product and use it to see if I liked it and wanted to keep using it. 3) It really made me start to look at what you need to finish a race and how to train for it properly with your kit.

In that training time for the Leadville 100 I ran a lot of half marathons. It seemed to be my go-to race if I needed to do one. I put these races on my schedule and signed up for them to keep me focused and on track with my training. I was still running two or three times during the week and a longer run on the weekend. I went to a school out east and was exposed to sea level running, and then all of a sudden I was a half-marathon-crazy guy. I ran a lot of them, maybe 20, and even got to the point where I would run one on Saturday and one on Sunday. I was also pushing my times and trying to stay around 1:45 for the half. However, I knew I had to step up my game, so I signed up for some marathons – three of them to be exact – and made them happen. When I came back from the east coast I was still doubting myself, my equipment and my training. I think this is something normal with all racers and career folks. You think you are set and have a good method, then things change. I had picked up running in Hokas, which I would have never expected to do. I also picked up a Garmin and kept myself honest! When I got back to Colorado I was worried I wasn’t ready for the 100. So I signed up for the Leadville Camp and the Sheep Mountain 50. Those two events were so tough and demanding that when I was done I knew I was ready for the 100. Yeah right – I didn’t know, did I? Who is ever ready for a 100?

When the day came for the 100 it was just another day for me. I had put in the time and training, had changed a lot of how I went about life, and was rewarded in the end with a finish. It was a painful finish. I broke a bone in my foot about mile 60, but it was a finish nonetheless. But like I said, it was just another day and when I got my buckle I was very happy and proud. I think I was happier and proud my parents and some of my friends and family were there to share the moment with me. I am a happy runner and need those small things on long runs to get me over the edge. Not only did I finish in 2015 but I also crossed the line and improved my time by 30 minutes in 2016.

As I look back on my Army career and my retirement ceremony, it was just another day. I have become accustomed to big events coming and going. I have an ability to not dwell on the past. I was ready for the next chapter, the next trail, the next race. As I look out, I can offer you this: don’t live for the past but embrace it as you would the fear of the unknown. Live for unexpected joys and happiness in life, wherever that may carry you. If you ever need a buddy or friend to catch a race with or ti share a view on life with, I would love to be that person. See you on the high ground or see you at the next race.
– Sean
‘Live Free Run Free’
#Thumbsuprunners (Instagram, FB, Twitter, and all over)