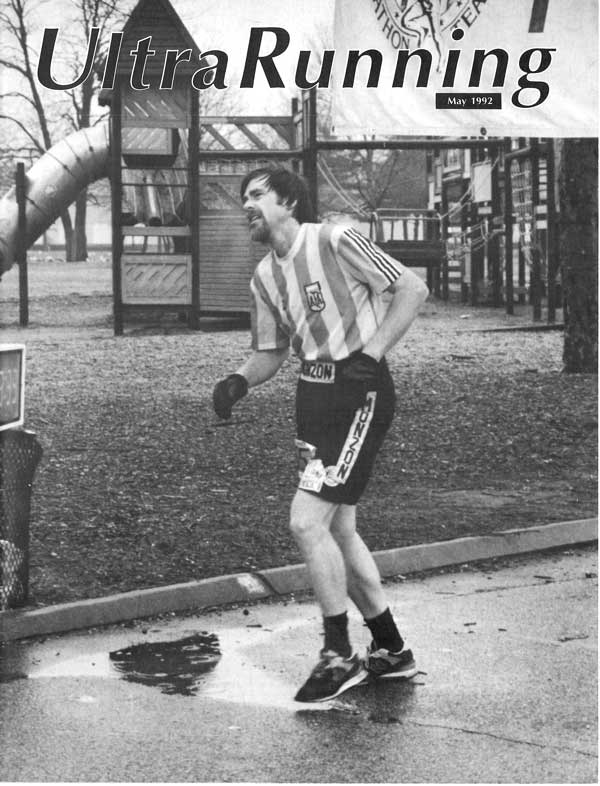 Living With an Ultrarunner It’s Not Always So Easy

After feeling guilty for so long for not sharing my husband’s enthusiasm for long distance running, I decided it was finally time to come out in the open. Perhaps registering my complaints about ultrarunners will lend support to other spouses who experience the same phenomena, and maybe poke a little fun at those of you who may recognize yourselves in this description. Following are some conclusions I have drawn after being married to a running fanatic (Gary Johnson, who placed ninth in the 1991 Angeles Crest 100 Mile Run and who totaled 127 miles in the 1990 Megan’s 24 Hour Track Run among other feats of wonder) for five years, in the form of advice for the newly initiated who may not know what they’re in for.

1. Expect your food bill to double. Burning fuel at a rate of 100 calories per mile may result in consuming twice as much food as the average American. Although most athletes with endurance goals endorse a complex-carbohydrate diet, many also avoid red meat, preferring the healthier but also more expensive chicken breasts and fish for their protein.

In our case, whatever we might save by eating vegetarian foods we spend on Gary’s dietary quirks and fetishes associated with the sport. All runners, it seems, have an attachment to the food that has made the difference in a race result, or brought them through a physical crisis unscathed. For my husband, it’s a box of Grape Nuts and a pint of peanut butter every week, plus the typical runner’s staples: Gatorade andPowerBars, usually bought by the case.

2. Ultrarunners need 25-50 percent more living space. Because our house is so small, four pairs of running shoes, eight water bottles, and 27 T-shirts may seem more apparent than they would in a larger home. But walk into any runner’s house, and it is immediately identified by the sweaty clothes hanging from every available hook; pictures, posters, and plaques from various events on the walls and shelves; and running magazines in the bathroom. Then there are the accessories to store: 15 kinds of herbs and vitamins, sun visors and hats, warm-up suits, rain gear, sun block, dog repellant, headlamps and flashlights, to name a few.

3. Don’t assume the ultrarunner will be the All-American lover. Although known for vigorous appetites for food and fresh air, this does not automatically carry over to a runner’s sex life. Adding seven to ten hours a week training time to the 40 hours most people work, plus time for stretching, showering, icing sore muscles, and so on doesn’t leave many magic moments for snuggling by the fire. Or else they’re too tired.

Also, since I would prefer not standing for 24 hours on the side of a track watching my husband run in circles, many of our weekends are spent apart: me at home and him sleeping (if at all) in a tent at the finish line.

Still, ultrarunners can show a romantic side. I proved it the time I stood nude in the living room holding a sale ad for a pair of Asics Gel Els and Gary’s pulse rate noticeably increased. (Your guess is as good as mine as to what really caused that effect.)

4. Always bring a tape recorder or witnesses with you to the finish line to document your spouse intensely proclaiming, “Never again!” This vow will be forgotten once the blisters have healed and the medal is hung in the trophy case. “Huh? I never said that,” is what you will likely hear when applications are due for the same run next year and you have already made plans that weekend for both of you to slip out of town (see #3).

Which brings us to the incomprehensible topic of motivation. What drives these maniacs? As you may well have guessed, I am not a “runner” (eight-minute miles or under). I jog to maintain wellness only and have never claimed to like it. I have about the same level of conscious enjoyment while jogging as I do when brushing my teeth; take away the opportunity to do either one and I become very uncomfortable — but while I am able to continue the activity, I don’t think of it in terms of pleasure.

On the other hand, Gary will bounce out of bed at 4:30 on a Saturday morning and be instantly excited about running 25 miles through mud, snow, or poison oak. I don’t understand it and furthermore, I don’t think runners do either.

When asked why they subject themselves to this kind of abuse, most merely shrug with the same attitude as mountaineers who are asked why they want to climb a particular mountain. I would have to agree with Jim Fixx that it’s a kind of addiction — not just a physical but a mental dependency, too — they need to run to be satisfied and content. To support that theory, witness the withdrawal symptoms runners suffer upon injury or other circumstances that keep them from running: irritability, listlessness, or short-term depression. About the only time my husband and I think alike about his pursuits is when he reaches the 80-or-so-mile mark on a 100-mile run and begins asking, “What possessed me to want to do this?” (This of course is a short-lived doubt on his part.)

5. Be prepared for complaining and accounts of exaggerated suffering after it’s all over. Part of the glory comes later, in the recounting with teammates of all of the gory details, both endured while on the trail and those resulting from completing such an arduous feat. Get a group of them together and it sounds like a post-surgery ward in the hospital. That is, if you can understand their conversation spiked with secret codes such as PRs, DNFs, TAC, and so on.

Sometimes there’s just a plain communication gap between runner and non-competitor. I am still baffled by Gary’s naivete when, the day after a particularly grueling race, he’ll hobble into the room on feet swollen to twice their normal size, minus one or two toenails, with blisters rubbed raw, and say (with irritation), “I wonder why my left ankle hurts.”

6. Ultrarunners are wonderful statisticians. These guys always run with a stopwatch and study race results like they were Playboy. The track star who can probably recite his times for every run of his career, the number of starters and finishers, records set, and so on, will always do so in not only hours, but minutes and seconds. Instead of replying to my polite inquiry with a simple, “Oh, I ran about 15 miles today,” the answer will always be specific, as in 14.7 miles done in 2:10:58.

This however does not imply an accuracy with numbers in other essential areas of daily life. When asked if there’s enough money in the checking account to pay the electric bill, the response is something vague like, “Probably won’t bounce.” Or even oblivious:

“When you drove the car last, did you happen to notice how much gas was left?”

“Um, no. There were some funny sputtering noises distracting me.”

7. Definitely count on feeling moments of unabashed pride and gratitude. “Just be glad he has such a healthy hobby,” a friend (who smokes) once chided me. It’s true — ultrarunners reach their prime in mid-life, unlike the good-looks and thinning-hair optimum. Also, besides the obvious cardiovascular benefits, exercise helps reduce stress (after running for 24 hours, who cares if the roof leaks?).

Along with the highs you can also expect to experience occasions of panic when your runner doesn’t show up at a checkpoint on schedule or neglects to call from out of town as promised when s/he finishes a race. When I paced my husband the last seven miles of the Western States Endurance Run, I had to literally sign my life away, releasing the race directors from any liability of “rattlesnake bites, bear attacks, or other injuries, including death.” There are hazards out there.

But directly following the periods of worry (I wonder if they plan it that way), are the times when the hours of loneliness and misunderstandings evaporate, and I’m there, joyously running with him in spirit. Like being with him at 4:00 a.m. when he sprinted across the finish line of his first 100-mile, even though I knew he had coughed all the way and hadn’t slept for two nights before. Or the time he stood before a hushed audience of middle school kids, explaining the reason behind his choice to do Megan’s Run. The student body responded by contributing over $100 to be donated to the Sudden Infant Death Institute. Or knowing that he gave up his finishing position to sit with a runner (who had taken a spill and broken her leg) until a medical crew could get there.

This last axiom tends to cancel out the other six. All kidding aside, ultrarunners are pretty inspiring. A co-worker who unblinkingly stared at me when I told her Gary’s results at a 24-hour run remarked in subdued awe, “Wow! Think of what we are all capable of — mentally as well as physically — if we could only commit our total concentration and energies toward accomplishing an objective.”

So true, You might enjoy my wife penning her thoughts when I was back later than my latest time. You and her could talk for hours.