“Where have you guys been?” was the reaction of race director Keira Henninger after asking who was running the Leona Divide 50K for the first time. The influx of runners jumping to ultramarathon distance continues to grow. Truly, 50k is the new 26.2. The more intrepid runners chose to run the 50-mile option while others who wanted a sample opted for the 30k.

Leona Valley is a 90-minute drive from Los Angeles. Most runners stayed at hotels in Palmdale, 30 minutes to the east. Others, like myself drove to catch the 6:00 a.m. race start. 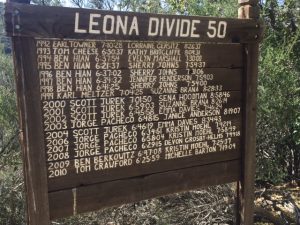 The race started quietly in this residential suburb. A mile of uphill paved road led to the trailhead. The ascent continued past the first aid station, Spunky Edison Fire Road, at mile 2.6. The course profile indicated the first five miles were uphill. I kept a conservative pace, race walking the uphill sections to save energy for the later in the race. Hot weather was in the forecast.

Once we hit the descent after mile five, I started to loosen and picked up the pace. The distance to the next aid station was six miles. I stayed there briefly, filling up my hydration flask and getting a bite of boiled potatoes. Runners turned around there and ran back to the previous aid station. The 50-mile runners continued in another direction. After checking out with the timer, I shifted my power walk into high gear. What went down, this time was going up.

The race is mostly on the scenic Pacific Crest Trail. The PCT covers 2,560 miles between Canada and Mexico. During the race, I met a backpacker who was hiking a section of the PCT. The undulating green mountains and view of distant Lake Hughes were picturesque. Soon, postcard-worthy wildflowers will bloom. 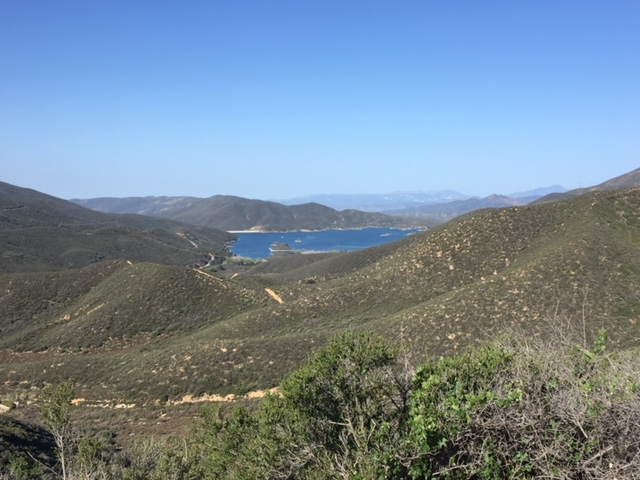 Returning to Spunky Edison aid station, now at mile 14.6, some runners took longer to rest. I refueled quickly. Volunteers informed me that the next aid station was seven miles of rolling – but mostly downhill – single track away. I was happy with my pace as I reeled in a few runners ahead of me. One female runner was at a standstill midway to the next aid station. I asked her if she was okay. She felt nauseated and dizzy. It was almost noon. The heat must have gotten to her. I only had salt pills to offer her.

I saw her again on my way back from the aid station, but this time she was responding well. More runners labored on the ascent. On the other hand, the 50-mile leaders were cruising along seemingly effortlessly. I needed to sprout wings to catch up with their pace. The PCT here is mostly exposed with very little shade. I didn’t refuel adequately, thinking my cheese sticks and gels would be enough. I ran out of food and water two miles before the last aid station, so I slowed down just to be cautious and sipped my remaining drop of water. Luckily, a good Samaritan shared extra water with me. At the last aid station, with just 2.6 miles left, I knew I was home. I doused my head and face with an ice-cold sponge, ate cookies, potatoes and energy gel, and refilled one water flask. I called out to the runner who had shared his water with me, “Kiley, let’s go!” He had arrived ahead of me but was still refueling. A few runners stayed longer under the tent while others were being tended to by tireless volunteers.

Heading into the final onslaught, I looked back and saw Kiley not far away. It turned out we live not too far from each other, have a lot of friends in common and had ran some of the same races. That is what ultramarathons are all about. The camaraderie is different.

For those of you thinking about joining the ultramarathon bandwagon, you are all welcome. Just don’t expect big crowds and water stations every mile.