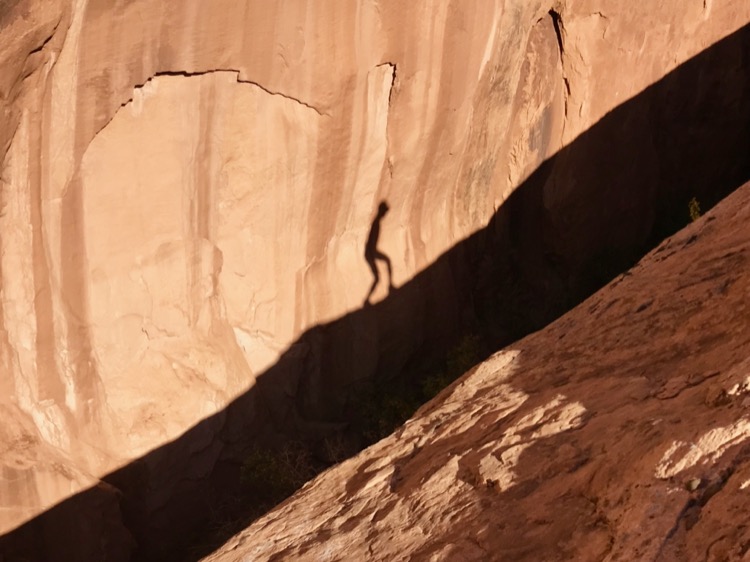 Buzz Burrell leaves only his shadow when running over slickrock in Moab and notes that the Ancestral Puebloans are still with us.
Photo courtesy Buzz Burrell.

This article was originally published in the May/June 2022 issue of UltraRunning Magazine. Subscribe today for similar features on ultra training, racing and more.

For the most part, runners don’t litter. According to legendary ultrarunner and adventurer Buzz Burrell, this has remained true for generations.

When Burrell and his FastestKnownTime.com co-founder, Peter Bakwin, also a legend in the sport, were asked what they’d seen stewardship-wise over the years and what advice they would have for younger runners to help protect the trails and ecosystems, they said that they take Leave No Trace (LNT) ethics seriously.

“Many people have worked hard behind the scenes to enable public access to public land, with few runners lifting a finger,” said Burrell. He advised runners to “step out of your bubble and participate.”

Burrell and Bakwin have set dozens of fastest known times (FKTs), even before the concept solidified. In 2000, they set the supported FKT on the historic Nüümü Poyo (commonly known as the John Muir Trail) in 4 days 13 hours and 39 minutes. Two years later, in 2002, Bakwin reset it in 3 days 22 hours and 4 minutes.

Bakwin and Burrell pushed boundaries by setting fast times on routes before it became widely popular. And the only thing they’ve left in their wake are their footprints.

They are artists in remote landscapes and experts at navigation and identification of natural attributes. Burrell and Bakwin plan their routes meticulously, scouring over maps and weather reports, and truly learning about the environments they traverse.

Burrell stays informed on local politics, engaging younger runners on topics about open space and trail maintenance. Both veterans of the sport are examples of the fact that it’s important to be engaged and responsible.

“Going faster doesn’t make you cooler than anybody else or give you any less responsibility for stewardship of the land you are recreating on,” said Bakwin.

He advises runners to learn and follow LNT principles, which is well known in backpacking circles. As ultrarunning becomes more popular, it’s imperative that we share LNT principles with our running buddies. Here are the seven basic tenets:

Plan ahead and prepare. Plan for safety, prepare to LNT and hone realistic goals.

Dispose of waste properly. For human waste, if you cannot dig a 6-inch deep cat hole at least 200 feet from trails or water, prepare to pack out all human waste. “Wag bags” are lightweight and can be trashed when you get home. Always pack out all trash, such as gel wrappers and tampons. Don’t litter.

Leave what you find. Do not pick wildflowers or touch cultural or historical artifacts.

Minimize campfire impacts. Specific to camping, it’s extremely important to fully extinguish all campfires. With worsening drought conditions in most parts of the West, there will likely be a ban on fires. Use a stove instead.

Respect wildlife. Do not feed, pursue or agitate animals. Travel quietly, except in bear country where a little noise helps warn bears of your presence so they won’t be startled.

Be considerate of others. Control your dog, don’t play music, and be nice.

If you see someone on the trail violating these basic LNT guidelines, share your knowledge. Choose empathy over anger because oftentimes, people might not know their actions are problematic.

Specific to running on established trails, run through mud, not around it, and announce yourself before passing someone from behind. Sign up for at least one trail work day each year and try to bring a friend.

Burrell’s note about litter might seem simplistic, but look at any ultramarathon. How often do you see someone’s lost gel packet mid-race? There’s never an excuse to litter and we must continue to hold each other to these standards whether we’re in an urban park, a remote wilderness or at mile 85 of a 100-miler.

Clare Gallagher is an ultrarunner and environmental advocate living in Boulder, Colorado. After studying the impacts of climate change on coral reefs at Princeton, she transitioned to running long in the mountains.