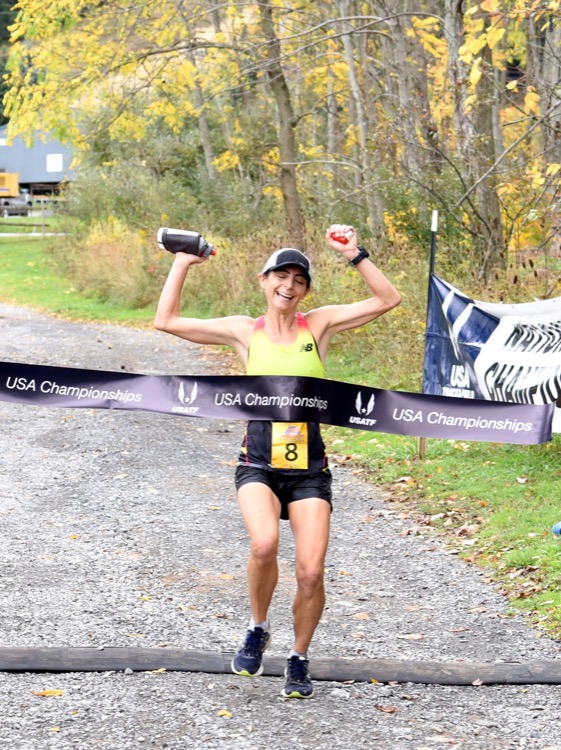 It had rained all night and the mercury was at 70 degrees at the 7 a.m. start of Tussey Mountainback. Deep in the central Pennsylvania forest, past mile 20 where the route scuffs 1,300 feet upward across 3+ miles, a hanging fog thrust into the canopies of turning leaves adding an air of mystery. But it was here that steady tracks would burn away any uncertainty about who would dominate the action in the quest for top honors in the USA 50-Mile Road Championships.

Chris Raulli had captured the title at the USA 50-Mile Trail Championships in Ithaca in June, and David Roche, who took third at the 2017 USA 50K Trail Championships, was poised to take on his first 50-miler. Charles Joslyn, runner-up at the 2016 USA 50K Road Championships, had won titles at the Steamtown and Harrisburg marathons. Anthony Kunkel, having won spring races in Arizona and runner-up at last year’s JFK50, was primed. On the women’s side, Dani Filipek had won the 2017 USA 50-Mile Trail Championships, and Liza Howard, two-time winner of the Leadville Trail 100 Run, was ready for something new. Justyna Wilson and Anna Zielaski had taken second and third in this race last year, and three-time winner Connie Gardner was back and feeling fresh.

Kunkel had prepped for the climbs. “I trained on 171, a forest service road that parallels the end of the Colorado Trail in Durango. It matches the grade of Tussey almost perfectly, while averaging 6,000 feet higher altitude (7k low point) and is unbroken uphill for as far as I inant to run.”

Going into the biggest climb of the day just past mile 20, Kunkel was already putting ground on the field, and several runners dropped before mile 28. “I really didn’t want to be alone that early, but I get it – we were way under course record pace and it was already super warm.”

The Tussey course is 82% packed gravel, with sections of asphalt scattered here and there, including the final 2.5-mile descent to the finish. Kunkel was ready for that, too. “The other vital part of my training, relevant to the course profile, was hitting the pavement to and from 171, which I believe trained my legs better than soft surface to handle the pounding. It was the faster miles down that pavement that prepared me to cover the early moves by all those guys, while trusting I would be fine later in the race.”

Visuals can motivate, too. “It wasn’t the title or the finish time that I was letting pull me along – it was the course and the experience,” recalled Kunkel. “I wanted to chase fall colors and have a fun day with my fellow runners and my crew [Sheila West, a Penn State professor]. I wanted to have a day I’ll remember in five years, or 50. The beauty of the course was a huge factor in that: you crest a hill and you don’t know what to expect, or you bottom out on a descent and the water is trickling by near an old building. Coming from the San Juans/Four Corners, the wetness and the dozen shades of fall are such a strong stimulus for me.” 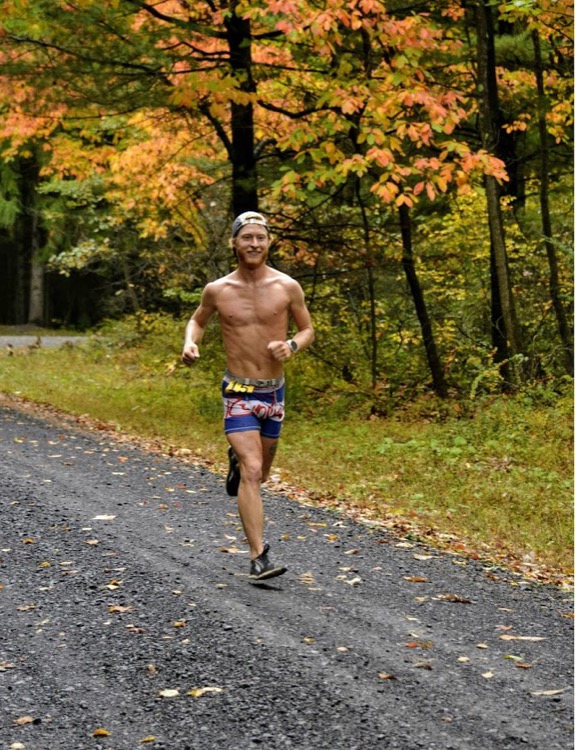 Anthony Kunkel revels in the lush surroundings along the way. Photo: Heather Weikel 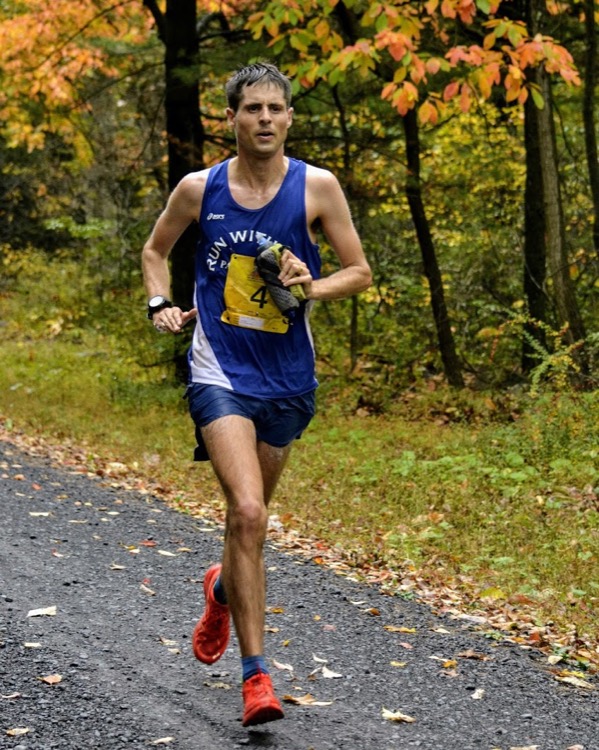 “I hung back from the leaders for the initial miles because the pace seemed unsustainable for me,” recalled Joel Frost-Tift, who would hang on for second. “I wanted to keep contact though, so I stayed only a few minutes back at a pace that still felt pretty quick.” At first Frost-Tift kept steady and tried to slowly make up the gap on Kunkel, “but around the 40 mile mark I got really dehydrated and started having major cramping in my calves. Eventually I was just trying to stay upright and avoid getting passed.” 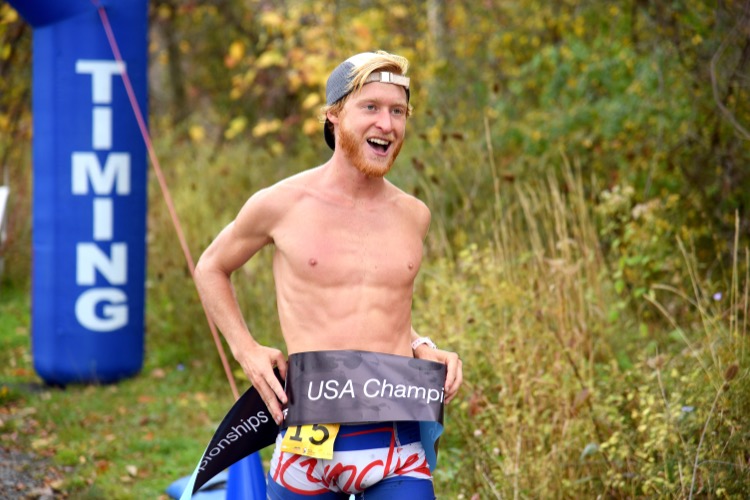 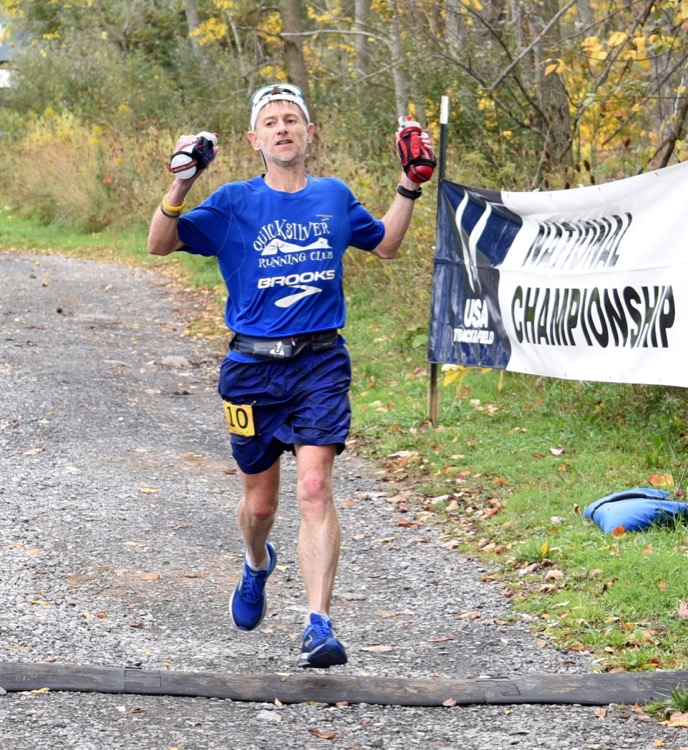 Coming from San Antonio, Liza Howard had geographic hurdles to training. “As a flatlander, I was worried about the hill at the start of the race. I did a lot of short hill repeats in my neighborhood, but it was hard to make the time to get out the long hills in town due to my four-year-old.” Mile four began a welcome descent. “I ‘just’ needed to average an 8:10 pace to reach my 6:49 goal,” recalled Howard. The long climb starting at mile 20 put an end to that goal.

Around the mile 45 aid station her left calf had started cramping “and I had to stop a couple of times to yell at it. ‘Behave!’ The last four miles of the race are a beautiful downhill, and I was afraid I’d be reduced to a cramped hobble while the other women flew past me. I talked to my calf: ‘Come on, buddy. We can do this.’ The calf balked. I whacked it a few times. ‘Come on! Just three more miles!’ All I could think about was how I did not want to be passed three miles from the finish.” While she didn’t get the qualifying time needed for the USA 100K team, “it was the first race that I did not have an asthma attack.” Howard echoed what many runners discover every year in Rothrock: “It was like running through a dream of fall road running.” 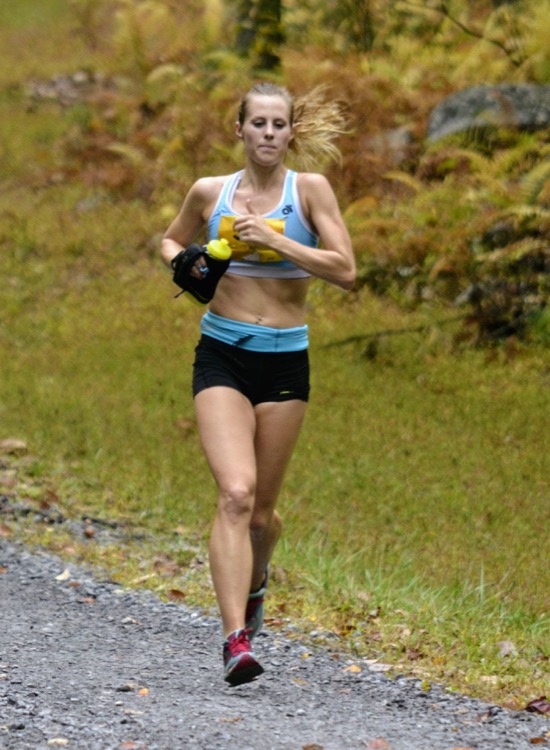 Dani Filipek was running strong and leading until troubles surfaced on the back half of the course. Photo: Heather Weikel

Filipek had been itching for a go at this 50 mile course. With a 2:41 marathon PR and 3:31 50k split in her dossier, she felt ready. She was leading into the second half until around mile 37. “I started to puke gummy sharks and coke, and took a careless right at a fork in the road.” She DNFed, but vowed to return.

“I’m a conservative runner and try to hold my horses the first half,” said Wilson, who finished just seven minutes behind Howard, “then pick up a bit later on. I did not struggle during this race and felt fresh ’til the end.”

Next year’s race date is set for October 7, 2018. All comers are encouraged to take it on, as the race’s slogan goes, “Just for the hill of it.”