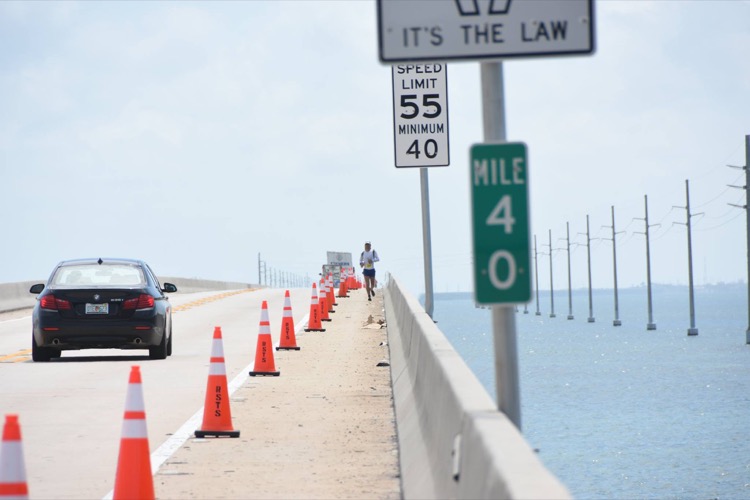 The Keys 100, undoubtedly the most scenic, fun, and competitive race of the Florida ultra-scene, commences in Key Largo, at mile marker 100, and traverses 33 Keys en route to the southernmost tip of the U.S.— Key West— at mile marker 0. Along the way, runners cross roughly 40 bridges, including the most precarious by foot, if not most magnificent of them all, Seven Mile Bridge.

This was my sixth year running the Keys Ultras un-crewed; the first year I completed the 50-mile race, and the last five years, I completed the 100-mile race. Keys 2016 was packed with emotions for me: it was my 22nd 100-mile finish, on the 22nd of May, which also marked the 5th anniversary of my mom’s passing. A week after I had crossed the finish line in 2011, my mother had lost her battle to cancer. Six months after her passing, I ran my first 100-mile race. Over the years, the loss of my mom and running 100-milers have become intricately linked, as if with each adventure, I discover facets of my life that are otherwise off limits.

Lessons in Survival
Heat and humidity were the theme of this year’s race. By the first mile in, most runners were drenched in sweat. Although I train in the heat, I fell victim early on. By Tavernier, around 10-miles into the race, I had already begun to unravel. “Are you okay?” friends asked passing me along the course, and I nodded. I couldn’t pinpoint what was wrong, other than an overall feeling of sea sickness, which persisted. The more I pushed on, the more I felt as if I were trudging through a steam room. By the time I reached the first manned aid station at mile marker 90—you count down backwards in the Keys—I was in trouble. My body was rejecting food and water.

Despite how I was feeling, the camaraderie on the course as well as the beauty surrounding me was uplifting. The sky was a dreamy pool-blue and every now and then, an ocean breeze cooled me; I caught whiffs of gardenia and jasmine as I passed home gardens, and each bridge crossing gave way to a crystal clear shimmering ocean below. Often there were boats in the water from which people sunbathed and fished. Pelicans and gulls were scattered about. It was easy to get lost in the scenery as the miles progressed. I tried to keep remembering the beauty during my most memorable meltdown, around mile 22 to mile 26, as I approached the mile marker 75 (really MM 73.9) aid station. To the various crews who helped me with ice and cold soda before, during, and after I was sick, you are my heroes! Along the way, it’s the amazing volunteers and course marshals who truly help to make the Keys 100 a safe and memorable experience!

Road Race
At the onset of the race, the Keys is run predominately on sidewalks and paths. As the race progresses, there are stretches in which you run on the road, facing traffic, in the safety of the bike lane. In terms of heat, the Keys 100 is not for the faint of heart. There’s the sun, humidity, and limited shade, all of which culminates around mile 43, when you enter the Tunnel of Hell, a marshy, off the highway path, which is the home to one long and slithering orange snake, a mass of 10-foot utility poles, high trees, grass, and marshy water off to the far right. Around mile marker 47, you make your way onto Seven Mile Bridge, where the race staff places tons of orange cones along the white lines to keep runners safe from the bustling traffic. After the 80-mile mark there are more bridge overpasses and sidewalks which take you off of the highway for one to two mile spans before you return to the road. According to Race Director Bob Becker, approximately 75% of the race route is run on sidewalks, bike paths, pedestrian bridges, and service or side roads.

Halfway There
Although I was surrounded by friends at the Keys, this race was a solitary experience for me. An experiment in talking myself through it. Often, I was able to focus and move. My hurdle seemed to be the 10-mile spans between manned aid stations. I was great each time I drank some Coca Cola—my staple this year—but by seven miles in, with three miles to go to the next aid station, I fell apart. This scenario repeated itself throughout my race. While I managed to run the Keys un-crewed each of the previous years, this year I struggled out there alone.

As I approached Seven Mile Bridge, I was alongside people here and there, but often passed them or was left behind. It was the first year that I entered the bridge in the dark. My goal each year is to arrive at the 50-mile aid station by late afternoon, say hello to my amazing 84-year-old dad who has worked there for the past five years, get myself ready for the night hours, and get moving! But in a race, as in life, things do not always go as planned. Adaptability is the key to survival. In the dark, I kept moving along the bridge. More than once, I about-faced and savored the full moon reflecting off of the ocean. Every now and then I glimpsed a boat floating in the water and I wondered why I am not one of those people who takes it easy and drifts out to sea when visiting the Keys. And then I thought, maybe I am that person: I am just choosing to drift along by foot, taking in the sights as I do.

Raison D’etre
More than once during this race, the heat and humidity, in addition to my stomach, wore me down. I tried to find a reason why I should keep running ultras: they often are painful; they require time, discipline, and focus; and they are full of struggle. I told myself: maybe this is it. Maybe I am done. But over the course of the miles another story emerged. Running is where and how I lose myself and find myself, depending on the day. Yes, ultras are hard. Yes, they often make me doubt so much. Yes, I struggle. Yes, they sometimes make me feel inadequate and desperate. But they also remind me that I create the drama surrounding them. That it’s my story, and I get to act it out as I choose. They remind me that sure, I can tuck myself away and read more books, rest more, cultivate my other passions. But running alongside that majestic ocean, passing along those bridges, what came to me is that I want to be out there living life, challenging myself, and if struggling is part of the journey, I’ll take it, with the hope that it leads to growth.

As the miles accumulated, I gave myself pep talks. When I didn’t feel that I had anything left in me, I changed the channel in my mind. Running teaches you about your relationship with yourself. It’s not that I don’t love to go the journey with others. It’s that sometimes I need to go it alone to see what I am all about in the middle of the night, on a road, with a destination far off. So many times along the way, I wished the race was over. Mile marker 35. Then the Key deer appeared, and I had conversations with them as I approached them, as if they were mini-gatekeepers, leading me forward. MM 24. MM 23. It felt impossible that I would reach the end. At one point I did the unthinkable and let my mind skip ahead – I knew that once I reached MM 5 and approached Roosevelt Boulevard in Key West, the final stretch of winding road alongside the ocean as I made my way to the finish line at Higgs Beach would be brutal. I knew that it would be hot and humid. That the sun would blaze my already sun burned and bug-bitten skin.

Key West Bound
Throughout the humid night, runners around me looked beat up, but determined. This collective need that we all seem to share to get to the finish line—as if our journey will end—sometimes perplexes me. For better or worse, our journeys never end, and knowing this, sometimes it makes me want to stop. Gather myself. Seek meaning in what can easily become meaningless. Why was I running this race again? Why was I pursuing this finish line for the 6th time? It’s my life. How is it still such a mystery to me?

That first year, I had known so strongly in my being that I was losing my mom. That she was leaving me. I didn’t want it to happen. But the thing about life is that we each have our own journeys and routes to pursue. It was time for her to move on; it was time for me to let go. In the weeks and months after her passing, more than anything anyone said to console me, deep inside, as silly as it may seem, I was so grateful I had crossed that finish line at the Keys in 2011. It became a point of reference to me. Even when my life felt as if it was falling apart, I knew that I could persevere. That I would. That is what the Keys has become to me—a reminder that through change, through hardship, through pain, through beauty, and grace, I am going to persevere. On May 22, 2016, the 5th anniversary of my mom’s passing, I crossed that finish line once again. Nothing magical happened once I did. But inside of me, that granite I am cultivating grew a bit stronger, sturdier, and a bit more gracious. Sometimes the things we do alone, the stories we tell ourselves in our darkest moments, when it feels impossible to go on, are what help us to reach mile markers in our internal lives. Ultras teach me to be more human, more humble, and more accepting of myself, which in turn helps me to be more accepting of others. To learn and experience that in a 30-hour span is enough for me to keep at them.

While there’s no way to measure if 2016 was the hottest year on record at the Keys Ultras–humidity, temperature, full sun versus cloudiness, and wind all play a role—RD Bob Becker is able to measure how veteran runners did year over year, and using that measure, 2016 was the hottest year on record for the Keys 100. Alyson Venti, who holds the 100-mile women’s record with a time of 14:42, aimed to run in the low 14’s this year. Her overall winning race time for 2016 was 18:27:35. Similarly, the winning relay team crossed the finish line this year in 11:12:06, whereas last year’s winning team time was 9:07:27. According to Bob Becker, “while there were exceptions, the vast majority of returning runners and teams ran slower this year than in previous attempts.”

Congrats on your finish! Despite solid training and a great crew it wasn’t meant to be for me and I dropped between 65-70. Ended-up in the ER needing four bags of IV just to feel half human again. Like extreme altitude, extreme heat/humidity like that served up in the Keys cannot be under estimated. Would like to return and do the 50 and see what Higgs Beach has to offer. Cheers!