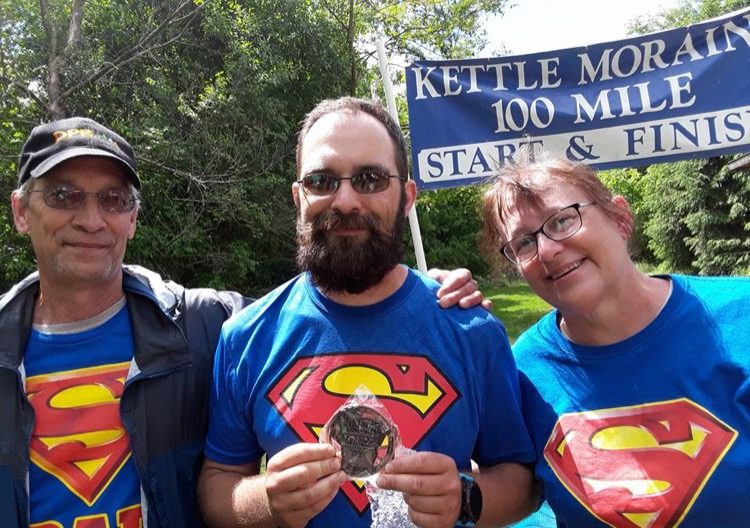 It is pitch black dark. From the parking lot, through the windshield of the truck, an eerie light rises that shines through the dense forest of trees surrounding the parking area. We open the doors and can hear the sound of heavy metal music coming from that same direction. We have finally arrived in Wisconsin after a long drive from our home in Missouri. This is the starting line for the 2018 Kettle Moraine 100 and for the next 30 hours, we will be crewing for Superman.

Looking back, it seems as if my son Matthew left the womb, stood immediately on his feet and began to run. From the very beginning we could not hold him down. When we tried to put him inside a crib he would scream as if he were in some kind of emotional pain. We quickly learned he was fine as long as we didn’t try and confine him. Trying to make him wear a coat became so impossible that I did what any self-respecting parent would do. I lied to him. I told him that he really needed to wear a coat, and if he didn’t his private parts would fall off and he would become a girl like his sister. It worked amazingly well with one drawback, which was his tendency to publicly proclaim that he was not stupid like his sister. His penis would not freeze off! He would not become a girl! I learned to meet the surprising looks of other parents with an eye roll, a shrug and a whisper of, “Whatever it takes, right?”

All through grade school we were told that he was smart and kind and would be a perfect student if only he could calm down, be quiet and sit still. His first day of kindergarten was immortalized on the front page of our local newspaper. The photo is a shot of him and his new friends running at recess. Neither of his feet are touching the ground.

The first time Matthew told us he had decided to run 50 miles I thought he was kidding. Then I was scared. Do people run for 50 miles? It will kill him. I have to be there. He will not be talked out of this and if he dies, I have to be there. It was the annual Des Plaines River Trails 50 Mile Race. When Matthew stepped out of his door in his running apparel, I noticed that he had chosen to wear a shirt emblazoned with the logo of his favorite superhero. I laughed and asked why. He replied that it would make him stand out enough that we would be able to see him coming from a greater distance, help make him more memorable to other runners as he made new friends, and that little kids really liked it. Good enough. Let’s go, Superman! It was that day, the first time I crewed for my son, that I learned the real secret. I finally understood that this is about more than running, and crewing is an experience all its own. 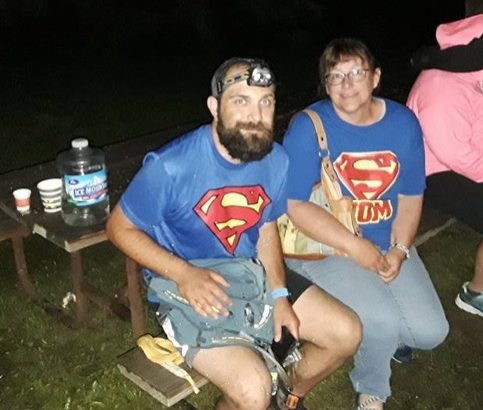 There are no strangers here. The energy is high. We have come together for a common cause: to provide support to a friend or family member. We talk as if we are old friends. We laugh together and sometimes wring our hands in worry. We have come to understand that this is more than just a long run through the wilderness. It is a spiritual experience. It is someone we love who has found a personal salvation that comes through pushing the limits of their physical body while filling the depths of their soul. It is hard to explain to friends back home that this “running craziness” as they call it, saved the life of my son. He had lost his way but found release from an alcoholic addiction through this “madness“ of running. It is his salvation.

After his 50-mile success, Matthew heard that 100-mile runners were complaining about races like Des Plaines that gave belt buckles to people who had “only run 50 miles.” He became a little angry and wrote a letter to the editor of UltraRunning Magazine to explain just what that 50-mile buckle meant to him, and how hurtful it was to be judged as unworthy. He’d made his point, but he was still a little hot and I asked him what he was going to do. “I’m going to run 100 miles!” This led to the 2017 Kettle Moraine 100 and a heartbreaking disappointment (for him) when at mile 80, he fell to the ground and couldn’t go on. It broke my heart as much as it did his. It is pain a parent feels which is indescribable to the those without children, when your child suffers and you have nothing to offer for solace.

He got back up, brushed himself off and kept going. He ran another 50 in October, and we knew that when June rolled around, he was going to do it this time. And then in April I was diagnosed with cancer. He asked if he should come home and I told him no, keep training. I had surgery in May and was told that I could not travel for six weeks, which was when I told the doctor that she had to make another plan because my son was going to run 100 miles and I was going to be there to see it. Nothing was going to stop me. She was stunned, “100 miles? ALL AT ONCE? Through the forest? Why?” I spoke with her and used names like Scott, Dean, Ann and Krissy, and explained how these runners had lit a torch that was meaningful and spiritual and life-saving for others whom they had touched. She shook her head and told me to get out of the car every hour and walk around to prevent blood clots. So I did.

And we were there. We followed my son through the long day and the longer night, the rain and mosquitoes, and watched him become almost delirious. We were thankful for his younger, stronger friends who ran with him and kept his spirits up and his legs moving. We shared our stories with others crewing for their loved ones, and because of our t-shirts with Superman MOM and Superman DAD logos, we became known as the “Super family.” We watched Matthew pass that 80-mile spot where he had fallen before, and he kept on until he crossed the finish line only to hold up that 100-mile belt buckle. I cried tears of joy right along with him. It was one of the proudest days of my life. 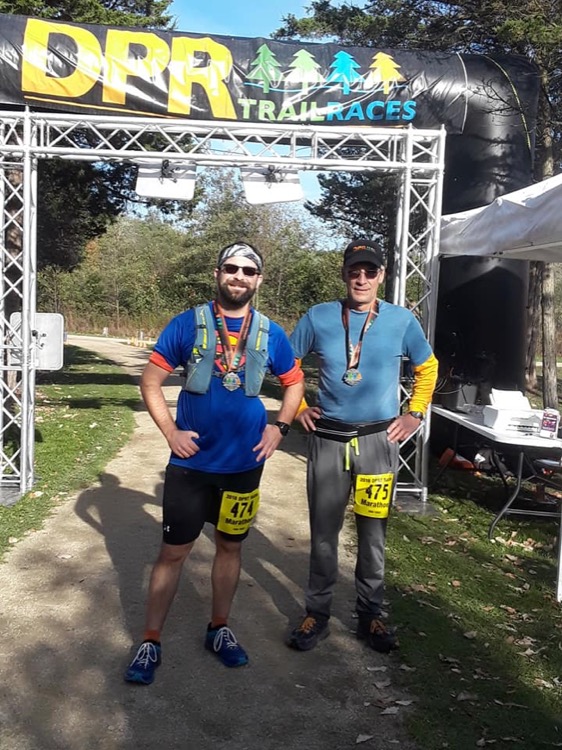 The race is over, and Matthew has begun talking about places like Leadville and Western States. He has stepped back a bit this year and signed up for the marathon instead of the 50-mile race. There is a reason for that. He has chosen to help someone else live their dream. You see, I crewed for Superman alone this year, because I was crewing not just for Matthew, but also for his father. My husband, who suffers from COPD, ran right alongside our son and finished his first marathon. I’m beaming inside.

This was very good reading. I hope your family and you are doing very well.

I am glad to to be related to such a fine writer! And two runners!

Beautiful story, I’m living with a 5 year old that sounds just like your son. I hope he has the same drive as Matthew when he grows up.

“We have come to understand that this is more than just a long run through the wilderness. It is a spiritual experience.”

This sums it up nicely…I couldn’t agree more!

I crewed for my daughter at Kettle in 2018, and I remember Matthew and your family. This well-written story brought me joy, (especially needed as the snow goes on and on and on this year in MN). THANK YOU so much, for sharing!

Thank you for sharing such a touching and relatable story.

This same sport has helped me, and countless others, battle many internal demons that we’d rather fix alone, rather than share or impose on others. I’m still not sure what exactly it is? Being in nature? Miles + Nature? Miles + Nature + problem solving? Whatever it is, it works.

Thank you Super Family for sharing your story. I hope more do the same. It truly helps those that have yet to share/vocalize their internal battles.

What a wonderful thing to share this. My son is, also, a runner. He has done 50’s and tried 100 twice. Got as far as 80 miles, he wii succeed. Thank you so much for sharing.

Just wanted to say that this is a lovely story; got chills reading it! All the best to you and your family.

I’ve read many, many running stories & articles – this is one of the best. Thank you for sharing, this is inspirational!