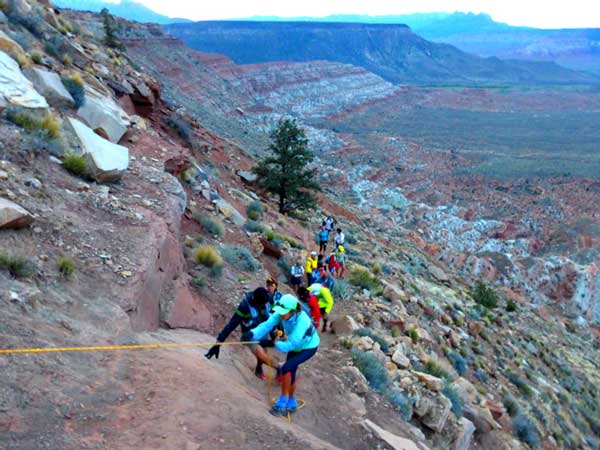 “It’s Not About Taking The Easy Road”: The Essence Of UltraRunning

As a runner and a professor of sport, exercise and performance psychology, I am fascinated by individuals who push their physical, psychological and spiritual boundaries. This led me to the sport of ultrarunning, which has come a long way, from a novel fringe sport to a highly competitive global sport with events offering prize money, and the top athletes receiving sponsorships. However, despite the sport’s progress, there is still limited psychological research on ultramarathon runners. The research that has been conducted has primarily examined motivations, changes in mood states and the thought processes of ultrarunners. I felt this prior research had failed to capture the essence of the experience of running ultra races. Therefore, the purpose of my research was to explore the experiences of runners competing in ultra races and ultimately capture a more in-depth and holistic perspective.

As a whole, the ultrarunning community was the most prominent theme that emerged from the interviews. Specifically, participants believed that community helped them to prepare effectively for events (e.g., obtain information on how to train), manage race demands (e.g., support from crew members) and discover new environments (e.g., running new races). It also enhanced their sense of personal achievement due to the small number of individuals participating in ultra races. Furthermore, unlike many other sport communities where ability and success are criteria for acceptance, in the ultrarunning community running ability, gender, experience or success were not viewed as important; rather, participants valued and appreciated other runners for being willing to take part in the event. This shared experience provided a social gathering in which community members developed friendships, felt respected and experienced camaraderie. Another unique finding was the importance participants placed on support crews and volunteers, without whom ultrarunning events would struggle to exist.

In order to successfully complete races, participants recognized the necessity of effective preparation. These participants often relied heavily on the ultrarunning community for advice. However, despite this helpful resource, participants had to determine their own proper training and nutritional needs through trial and error. Not surprisingly, runners in this study described the need for rigorous physical training to prepare for competition. Despite differences in training practices, participants placed great importance on covering enough miles during training to ensure they were physically prepared to cover the race distance. Participants viewed nutrition and hydration as vital for successful races, but strategies varied widely. Nutrition and hydration needs were idiosyncratic and influenced by the demands of each race.

To further prepare for ultra events participants surveyed the racecourse, prepared splits and times based on their goals, considered the appropriate equipment and clothing and designated specific meeting locations for crew members. These decisions were seen as vital, requiring considerable and sometimes obsessive planning. As may be expected of such a demanding sport, participants discussed the need to psychologically prepare for races. Several participants viewed mental preparation (e.g., visualizing completing the race, building confidence through training runs, using positive self-talk, setting goals) as a higher priority than some physical aspects.

This theme emerged as participants discussed the active process of managing aspects of their performance during the race. Runners described such processes as dynamic and continually evolving as the race progressed. Several participants described how they employed specific mental skills to cope with challenges. Mental skills used included self-talk, attentional focus strategies, imagery and goal setting. Participants described the importance of maintaining a positive inner dialogue throughout the race, specifically during difficult moments. In addition, participants set manageable goals, controlled arousal, used positive imagery to see themselves finishing and changed negative thoughts.

Physical pain was commonly experienced and manifested as fatigue, exhaustion and injury. These runners viewed physical pain as a normal aspect of ultrarunning and many believed that adopting an accepting attitude about pain was useful in managing it. A majority of the runners described focusing on the act of running to deal with pain.

Lastly, the results suggest ultrarunners are motivated to participate in these races to experience personal achievement, to push themselves beyond their perceived capabilities and to experience nature. Training and racing subjected participants to long periods of time under demanding physical and mental conditions. Such a self-imposed crucible provided fertile ground for runners to overcome personal obstacles, fulfill challenging goals and foster an aesthetic appreciation for their running environment. For these participants, ultrarunning is about more than just racing, it is an opportunity to stretch personal boundaries and explore uncharted areas of their lives. Furthermore, it appears that ultrarunning provided an opportunity for participants to enjoy time away from work, feel profound states of peace and spirituality, connect with a higher power and attain a sense of unity with the outdoor environment. In terms of personal achievement, participants not only experienced pride in completing the event, but also in simply being a part of the ultrarunning community.

In summary, the experience of ultrarunning is a very personal and meaningful process for all those involved. Despite the physical and mental hardships ultrarunners endure, there is a deep level of commitment to the sport and to others within this tight-knit community. When I embarked on this study, I sought to find the essence of the experience of ultrarunning. I think it is summarized nicely by this participant: “It is a voyage into the unknown about yourself, your body, what it is capable of, the environment and nature. For me it is a journey of discovery.”

Full Citation for the Study