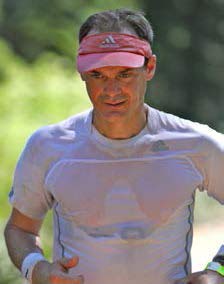 Doing ultras is a huge deal, and only driven people and those who dream big are drawn to it. Often, the people having the most fun with it are those who find kindred spirits and form a like-minded and similarly capable group that shares their passion for going extra-long. Such groups galvanize ultrarunners with support and resources. Getting out for long runs and the group events afterward are the high points of a weekly routine. Then there’s game day – races – at which everyone has a key role: runner, crew, pacer, cheerer or volunteer. Sharing photos and posts on social media only makes the tribe stronger.

Such groups’ members usually have some common threads – back of the packers, mid-packers, older, younger, fast, slow, road, trail, mountain, adventure and so on. But the best ones have some diversity. They try new things and they welcome new ultrarunners into their group. You are likely a member of one or more such groups. I was fortunate to be embraced by such a group when I was a newbie just starting out in the sport over 10 years ago – their thing was trail ultras in Northern California, and nearly every member had completed Western States.

Without this group’s support and encouragement I surely would never have become an ultrarunner, and it’s groups like this that fuel the growth of the sport. Sure growth creates some challenges, but to me this is a good thing: more people – and more groups – having fun with ultrarunning.

Over the past few months, there’s been a lot of chatter about what’s wrong with this and that in the sport. It’s usually in the form of complaints (or rants) about how others are not properly participating in the sport – whether it be ultrarunners with a different focus or ability, race directors committing some sins, the media improperly covering things or some other group or organization doing something that others want to criticize.

Don’t get me wrong, thoughtful and constructive criticism with a bigger perspective and the goal of improving the sport for everyone is great. But venting about others online is polarizing, and fails to reflect the values that have made ultrarunning so special. Broader society these days is rife with conflict and division. Ultrarunning does not need to be like that. In fact, it is a harbor in the storm, and I want to see it stay that way.

Maybe the next time someone thinks about what’s wrong and is about to complain, or is fixing to level some criticism where they see something different from themselves, it would be better if they stopped for a moment and asked themselves what their problem, or insecurity, really is. And if that doesn’t do it, here are some other ideas: think about the grand celebrations of last-place finishers at ultras, or about all the volunteers that make the sport possible or the helpful ultrarunners who are friendly with and encourage new entrants.

We all love this sport, and its growing tent is big enough for everyone.

Our goal here at UltraRunning is to provide a magazine that is relevant to and enjoyed by all of the sport’s participants and followers. That means our content isn’t 100% elite coverage, nor is it 100% back of the pack. The same goes for road vs trail, 50ks vs 100 milers, and so on. Yes, we are trying to be all things to all ultrarunners – a large and audacious goal, but that’s in keeping with the spirit of the sport.

One of the things we are doing to make sure our coverage is more inclusive is to expand our editorial themes. Coming later this year will be issues dedicated to women ultrarunners, the East Coast ultra scene and back-of-the-pack and mid-pack ultrarunners. If you have ideas, we would love to hear from you.

The theme of this issue is training – a common focus of ultrarunners in the spring months. A number of our columnists tackle this from various angles – high altitude, winter, hills, mid-pack running and running with your dog. We hope your training is going well as you pursue your goals and dreams for the year ahead.

May your every run be a great one.