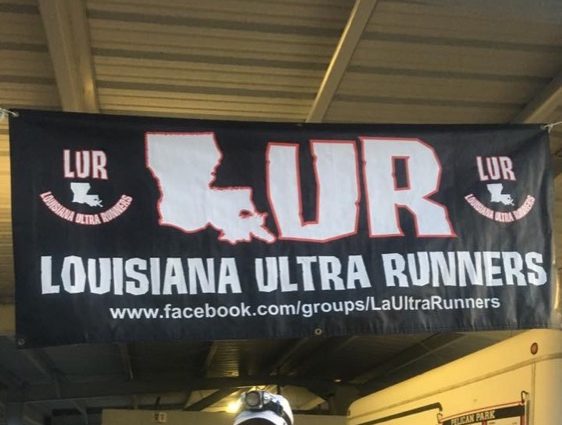 “The race doesn’t always go to the swiftest.”  Ecclesiastes 9:11

Hotter than Hell, Dusk to Dawn is a night trail run that pits runners against the oppressive heat and humidity of a South Louisiana summer. The race starts precisely at dusk on the middle weekend of July and ends ten hours later at dawn, 6:02 a.m. During the intervening hours, runners skirt Bayou Castine in the Northlake Nature Center in Mandeville on a two-mile double-track loop that meanders through the wetlands. Runners are serenaded by the night sounds of bull frogs, crickets and alligators. To keep things interesting, spiders as big as your hand await runners with their clothesline-strength webs suspended at eye level across the trails. A constant dilemma exists of wanting to look up to avoid the spiders, but knowing that if you do, you are vulnerable to tripping over the numerous tree roots that line portions of the course.

This year’s race was held on July 15, traditionally one of the hottest weekends of summer. Runners were encouraged to run as many loops as they could, but with the heat index staying in the 90s throughout the night, a many chose to stop well before the ten hour period had expired. While the intent of most runners was to beat the heat and humidity while logging big mileage, others came simply to get in a night training run on trails, regardless of the distance they ran. 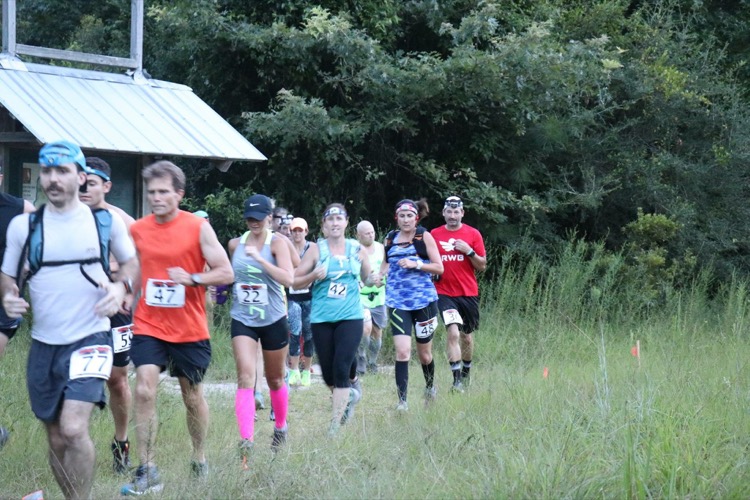 Runners near the start of the race. Photo courtesy Tyrone Callahan.

The lead runners went out at a fast clip as the sun began to set. The main pack followed at a more sustainable pace. The one constant for all runners was that everyone was dripping wet and their clothes completely saturated with sweat by the end of the first two mile loop.

The position of lead runners versus those farther back in the pack stayed relatively the same during the first few of hours of running. By midnight, however, the strain from the heat, humidity and exertion was taking its toll. Several runners had already been forced to call it a night because of nausea and vomiting. These complaints grew stronger throughout the night. So did complaints about falling over roots in the dark. Runners were regularly coming in to the aid station covered in dirt and with scraped knees, a testament to the difficulty of trail running through a root-infested wetland at night.

Most runners had started the evening intending to run as many miles as the ten hour cutoff would allow. For any runner who completed 32 or more miles, a coffee mug embossed with the LUR Louisiana Ultra Runner logo awaited them as a finisher’s award. By 1:00 a.m. many of the runners who had started the race at a fast pace were deciding that big mileage was no longer realistic and they were heading home after completing 32 miles in the heat and humidity. The race doesn’t always go to the swiftest.

As the lead runners were stopping early, the runners who had gone out at a more conservative pace moved up and continued using the remaining hours before sunrise to increase their mileage totals. Newbie ultrarunner Keven Spruell was within this latter group. Running with veteran ultrarunner Rhea Loney, Kevin methodically ran a steady pace throughout the evening and early morning hours, ticking off lap after lap. With the rising sun in his face, Kevin completed his 23rd lap with only minutes to spare before the dawn cutoff. 46 miles and a first place finish – not a bad night’s effort for his first ultramarathon! 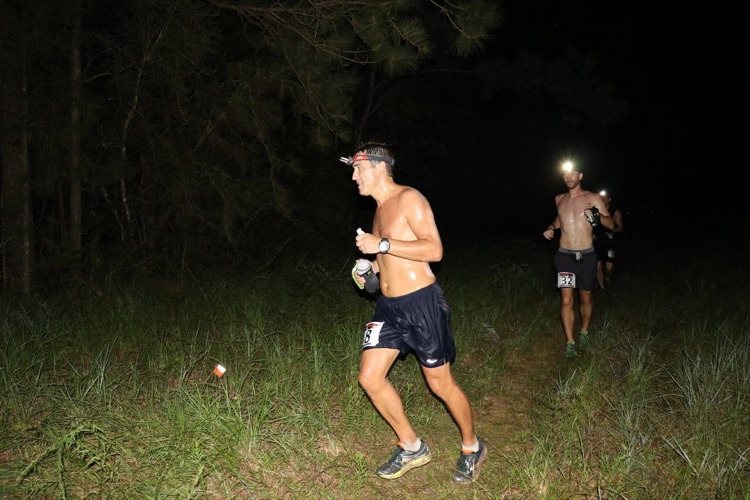 David Burns and Richard Springthorpe ran a large part of the night together, collectively battling the heat, humidity, spiders, roots and fatigue. With less than two minutes to spare before the dawn cutoff, both finished with a total of 44 miles. David arrived at the aid station less than a minute before Richard. Second place overall for David and third place overall for Richard.

Jennifer Langevin made her second appearance at Hotter than Hell, Dusk to Dawn, having placed first female in 2016. Jennifer started this year’s race near the middle of the pack and ran steady throughout the night. She completed her final lap just before sunrise, exhausted and with a tally of 42 sweaty miles, making her first place female for the second consecutive year.

Rhea Loney claimed second place female. Having already completed the Georgia Death Race, Grayson Highlands 50K and Mt. Mitchell Challenge earlier in 2017, Rhea finished 42 miles as the sun peeked over the horizon. Rhea had gone out conservatively and used virtually all of the ten hours allotted for the race.

Rebecca Fisher ran Hotter than Hell, Dusk to Dawn as her second ultramarathon. With the experience of a veteran, Rebecca ran conservatively and used most of the night to finish her longest run to date, 36 miles. In so doing she claimed the third place female position.

In total, 68 people showed up this year to take on the heat and humidity at Hotter than Hell, Dusk to Dawn. When all was said and done, 48 of those runners completed 32 or more miles and went home with a coveted finisher’s mug. Without exception, the runners who completed the most miles were also the runners who went out at a pace respectful of the conditions.

Lesson learned: During a South Louisiana summer, respecting the heat and humidity may be more important than being fast. After all, the race doesn’t always go to the swiftest. 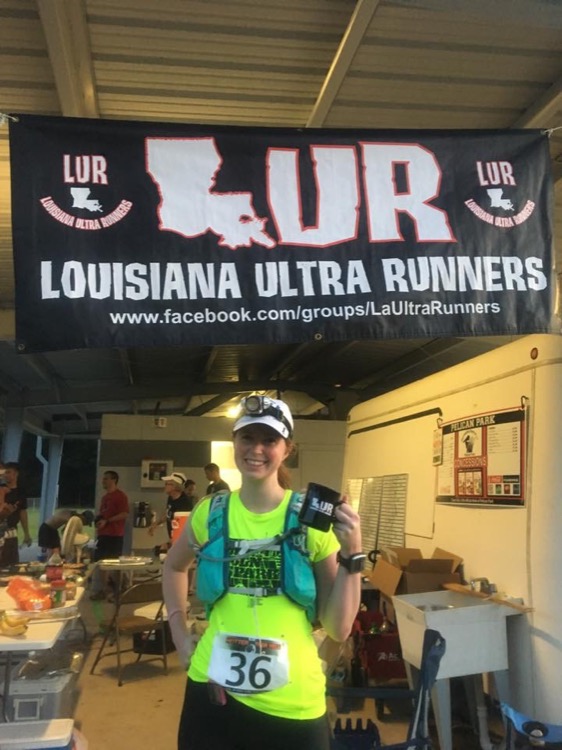