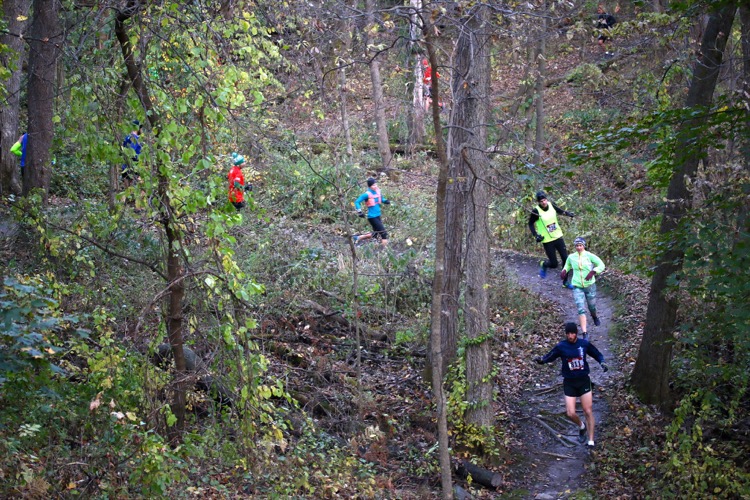 Hixon 50K: In the Heart of the Forest

This race started for me at 4:00 p.m. the night before I toed the starting line. As I sat in the front seat of the car flipping through a magazine, my husband, Jesse, tapped on the passenger window. I stepped out into the blustery late-October wind and stood in front of him. “So?,” I asked my reconnaissance man. “These trails are butter. Smooth, perfect single track with tons of switchbacking rollers…you’re going to fly on this stuff. But I want to show you something.” We walked toward the trailhead and looked down a wide grass straightaway cutting through the center of the bluff-top prairie. “See that tree line?” I gazed a quarter mile down the trail and saw where the forest began. “Tomorrow you need to be in the front pack all the way there, then you make a sharp right and you’ve got three miles of singletrack. If you don’t put yourself out there, you’ll lose so much time.” I hesitantly agreed to this strategy and turned the conversation toward dinner.

With its third running in 2017, Hixon 50K is a relatively new event set in a region that’s made for trail running. The dense forests and craggy limestone rock faces that make up the unglaciated terrain of western Wisconsin’s Coulee Region beg for a foot race. La Crosse, Wisconsin is sandwiched between the Mississippi River and a dramatic range of bluffs that tower almost 600 feet over this Midwest college town. With an immense system of hiking and mountain bike trails in the Hixon Forest, a dedicated trio of young running buddies established the Hixon 50k/25k races because the trails were just too good not to share. 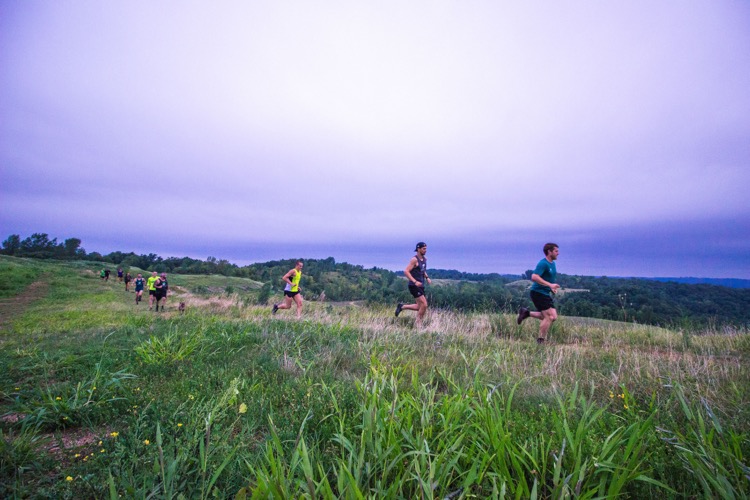 The timing of the Hixon 50K was a perfect race to toss onto 50-mile training from a September race. This event would be only the second trail race in my life that I didn’t have my wild brood of kids along for the adventure. After the two hour drive up to La Crosse I felt pretty fancy checking into the hotel without a three- and five-year-old to chase around. Over dinner Jesse and I hashed out crewing details and apparel and hydration decisions. With a starting line temperature of around 30 degrees, a daytime high of 42 and ten aid stations, I decided that a handheld water bottle and some gels and waffles in my running top would be more than enough.

Starting lines always freak me out, but the morning of October 29 was particularly nerve-wracking. Jesse coached me over and over again that I needed to be in the lead pack. “I don’t care if you go out with the tallest, skinniest, fastest looking guys, just get your butt out there.” I decided that the worst that could happen is that I would burn out and need to let a few racers pass me but that would be better than negotiating a dozen passes in the first few miles of the race. When the clock struck 7:37 a.m. I flew out with the fast guys! Jesse was standing on the side of the start/finish chute making a circle with his finger mouthing faster, faster. I looked down at my watch and it read 5:40 min/mile. I managed to get up to the single track without any brushes with lactic threshold then began to float over the perfect trails.

The race directors had leaf blown the trails the days prior to the race which made for much appreciated footing ease. Despite this I managed to roll my ankle around mile eight. A miscalculation on a risky leap onto a root and my knee buckled under me just enough to avoid real damage. That wrong step deflated me quite a bit and made pivoting and quick reactions a challenge. My home trails in Blue Mounds, Wisconsin snake around tight, steep valleys in joyfully fast, momentum-building switchbacks that I’ve always wanted to race in an ultra-distance setting. The trails at Hixon Forest have the same topography but times five. After the ankle mishap, I felt frustrated that I couldn’t devour the jumps and turns with as much enthusiasm as I would have liked. 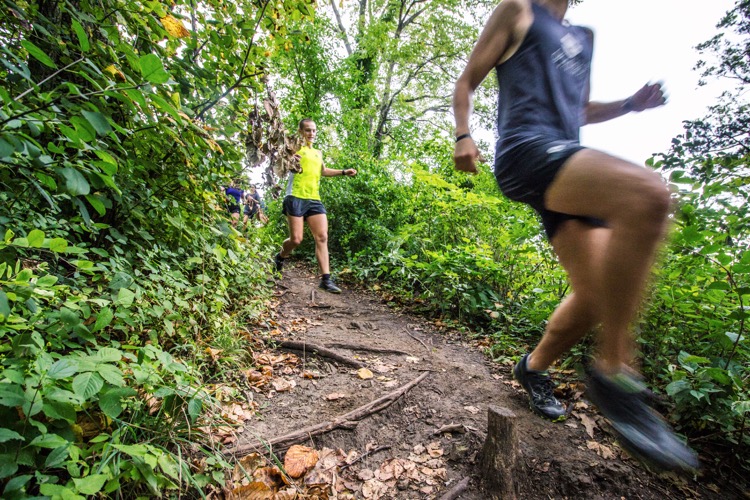 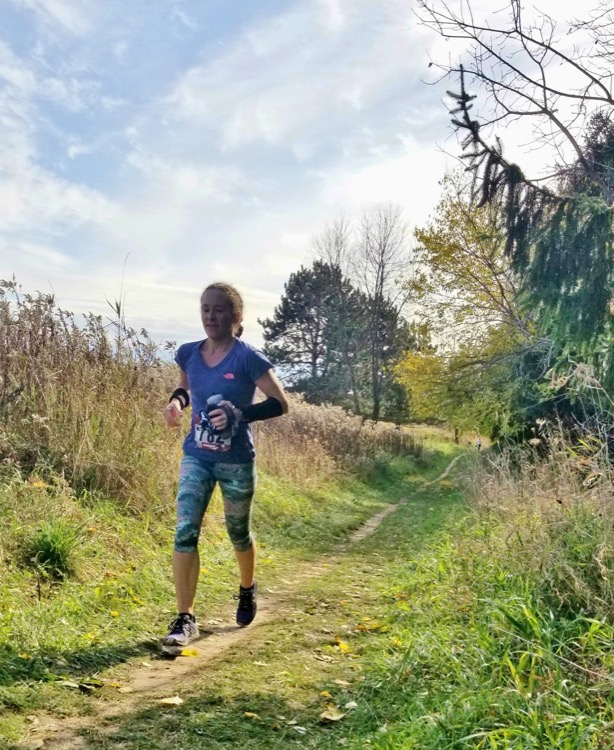 The 50k is two laps of the 25k course. This was my first time on a lapped course and I wasn’t sure how I felt about it. It turns out that from a logistical and strategic point, lapped courses are brilliant. Jesse was in the start/finish area so he didn’t need to coordinate meeting me at various aid stations and I knew what I had coming up in the second half of the race. For this reason, I never had the mileage displayed on my GPS watch. I kept track of my progress on the course with landmarks and this helped me focus on my perception of the various sections versus an actual mile figure which can be discouraging.

I felt pretty low when I came up the 550 foot climb just before the halfway point. Because of my ankle, I wasn’t able to bomb down the course’s 2.5-mile descent as I had planned and I felt thwarted by my clumsy setback. As I ran through the start/finish area Kanye West’s song “Stronger” blasted out of the speaker system. The robotic, synthesized hook latched onto me and I felt like I had super energy: Work it harder, make it better, do it faster, makes us stronger, more than ever, hour after, our work is never over. It’s amazing what a well-timed song can do for your spirit. Jesse topped off my water bottle and I was in and out of there in 30 seconds heading down the grass straightway for my next lap. 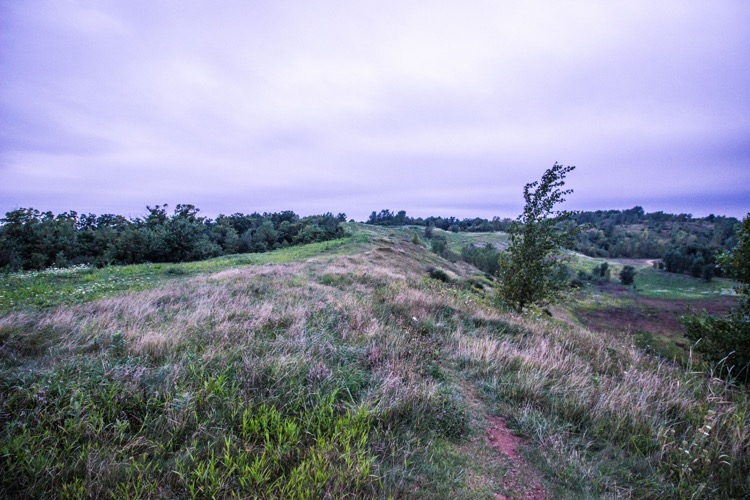 Once I had the first half under my belt, I was able to see the beauty of the trail in full view. I was on my own, not being crowded out by other racers and I soaked in all of the nuances of the Hixon bluffs. As I ran through a handsome stand of Birch trees hanging onto their last golden leaves, narrow trails that clung to gnarly rock outcroppings, and a stark, windy ridgetop prairie, I felt the familiar peace I find in the challenge of the miles contrasted by the beauty of the trail. I zigzagged through the technical switchbacks of the upper Hixon segment and danced around sharp angles by catching myself on young trees and swinging around the turn, protecting my ankle on the fly. 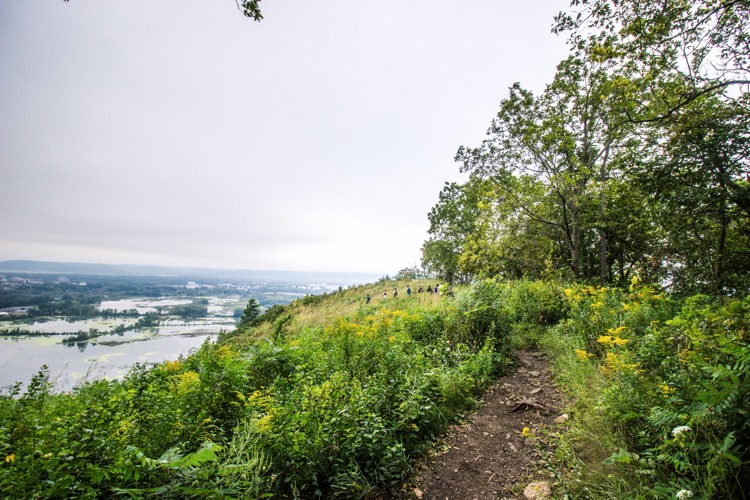 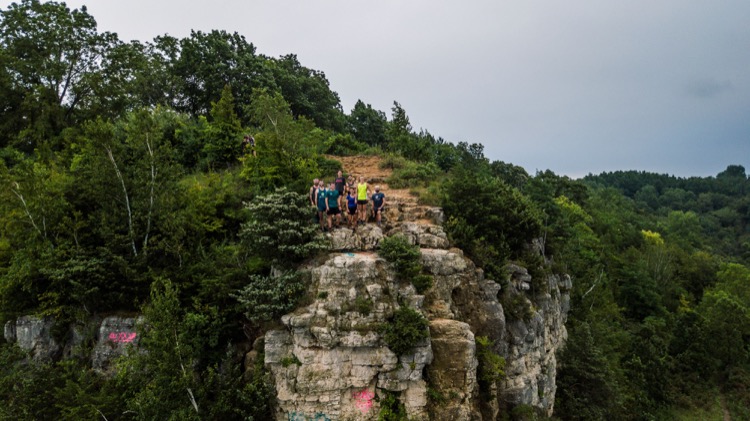 In trail running I’m in endless pursuit of feeling wild. This is why I run and racing evokes the wildest version of myself. Around mile 20 I came up on a young whitetail buck. He stood in the middle of the trail that paralleled mine in the tight labyrinth of single track. I thought he would turn and run away but instead he ran adjacent to me, so close that I could hear his snorting noises as his hooves struck the dirt and leaves. Getting a chance to run with the buck was the most important part of Hixon 50K for me. He made me feel like I was so wild that he wasn’t even afraid of my humanness.

The race finished with a satisfying stride into the finish with plenty of fanfare and the race director even pronounced my name right when he announced my win! I walked away with a bag full of winter running apparel from Saucony and a handmade wrought iron trophy that was clearly made with love. After collapsing in the grass for a few minutes and trading stories with the guys who finished around me, we decided to make our way back home to the kids. Hixon 50K has a standing spot on my race calendar.

What a great article, congratulations on the win.
Amazing, sprained your ankle, ran with a buck and still one.

Maybe we should call it, Running with the Bucks!

We love Jake, Tyler and Mike around here, and we love the race they put on.

Thanks for writing about Hixon 50K.