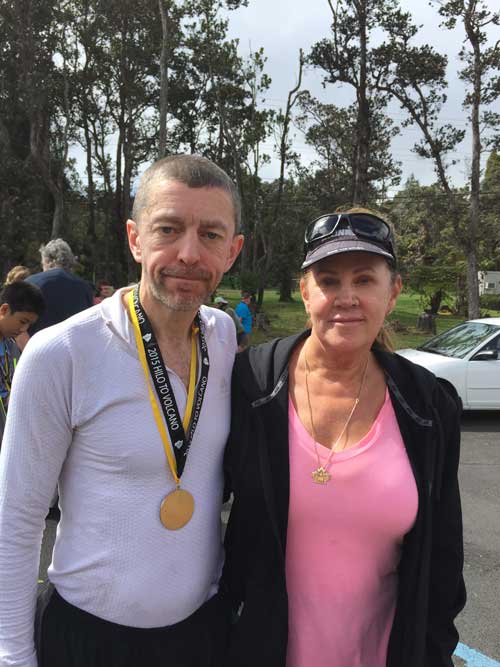 Hilo to Volcano 50k: Another race in a beautiful place

This was my third time running the Hilo to Volcano 50K, as I had also participated in the 2004 and 2005 events. My flight from Portland, OR, arrived late Friday, January 2nd, in Hilo, Hawaii. After a few hours’ sleep, it was time to get up and ready for the 6 a.m. start. A severe windstorm overnight brought trees down and caused the start to be delayed about 20 minutes. Starting from sea level in Hilo, the course ascends via paved road to the town of Volcano at 4,000 feet, 31 miles away.

The race is run as a relay as well as an ultra, so there were no aid stations provided – having crew was ideal. Juliet, my crew person, offered up water, sport drink, Clif Blocks and Shots every 15 minutes or so, and then more often as the race progressed and the temperature warmed. I was comfortably in the top five, and moved into the top three after an hour and a half. By then the leader was pulling away by 10 or 20 seconds per mile, and by mile 25 had a seven or eight minute advantage. I opted to fast walk a couple of the longer, steeper hills, and as a result was able to progress faster on the more runnable sections. This strategy paid off in the end, as the last few miles of the out-and-back finish were rolling hills.

I was able to take the lead with a few miles to go and hold a small advantage to the finish. The owner of the company that times the New York City Marathon every November lives in Volcano and keeps time for this much smaller event each January as well. His timing company sets the world-wide standard. Three seconds after crossing the Hilo to Volcano 50K finish line, participants are handed a slip of paper with their chip-timed pace, place and finish time. Such a nice treat after all that hard work.

Editor’s note: The author was the winner of this event in 2004 and 2005 and then a decade later came back to win it again.