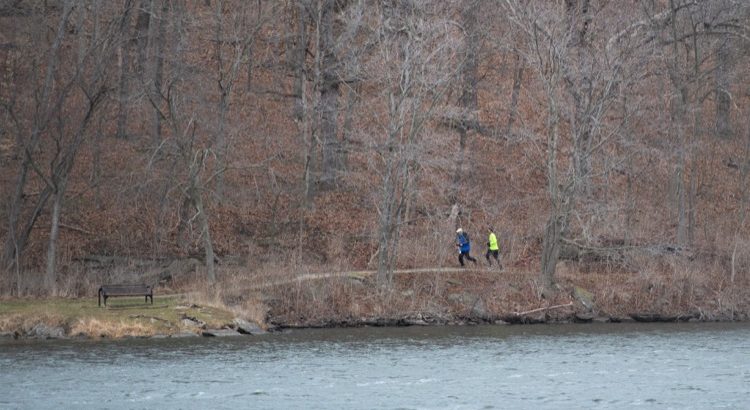 You don’t often see the words “Iowa” and “ultrarunning” in the same sentence. And, we understand. The Hawkeye State has no mountains and little gnarly single track to attract hardcore masochists.

But, there are a few ultras scattered around the state, and they have their charms. The Hawkeye 50K – run concurrently with a 25k – is one example. The race, two loops through scenic Lake Macbride State Park (near Solon, Iowa), follows the shore of the eponymous Lake Macbride much of the way and tosses in enough rolling single track to keep it interesting for the dedicated trail martyr. According to my GPS, there’s 2,303 feet of elevation gain, but it seems like more, especially if the course is wet. And, this is Iowa in April. Anything is possible, from a blizzard to 90-degree heat.

The course includes a little bit of everything: road, crushed gravel, and rolling single track with a bonus water crossing for those whose experience wouldn’t be complete without a little extra suffering. 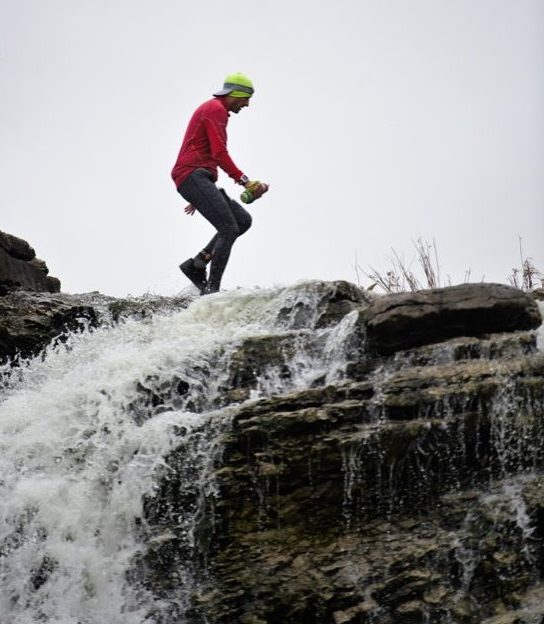 Race Director Brian Tharp, owner of We Run, a specialty running store in North Liberty, Iowa (with a branch in Cedar Rapids), is passionate about the running lifestyle, and that passion is reflected in the race’s attention to detail and enthusiastic volunteers. Moreover, the race benefits Team RWB and Team Rubicon.

In addition to the 50k and 25k distances, the race also includes a Ruck Division (new for 2018) at both distances. Ruck Division runners must carry a minimum of 20 pounds. The 50k time limit of eight hours is extended to ten hours for Ruck participants.

I signed up for the race as a final long training run for the Ice Age 50 Mile on May 12. The goal was not to race but to set myself up for success at Ice Age. So, the plan was to go slow, practice hydration and nutrition strategies, enjoy the scenery, and have some fun. What could go wrong?

In the days leading up to the race, the weather forecast was hardly auspicious. But, on April 14, a couple hundred intrepid runners toed the starting line in Solon, Iowa. It was overcast, 36 degrees, and the winds were howling at 25-30 mph. Two hours into the race, the rains came and stayed. By the second loop, the single track was a gooey mud and running downhill was an adventure.

But, ultrarunners are a hearty lot and often welcome a suffer fest, and this was a little bit of Barkley in eastern Iowa. The striking scenery – whitecaps on the usually placid Lake Macbride, the dank woodlands, and sodden trail – only enhanced the sense of adventure.

I can’t say enough about the volunteers. It’s one thing for a bunch of crazy runners to spend hours out in frightful weather. They get bragging rights, a surfeit of existential suffering and a cool finisher’s medal adorned with a hawk’s talons. But, what about the volunteers? They braved the same elements and never seemed to flag in their enthusiasm on a difficult day. They are unsung heroes. 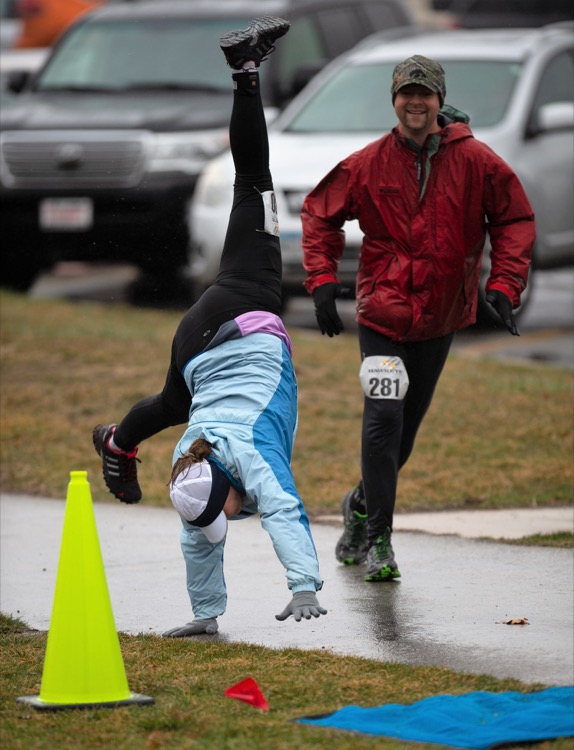 Happy finisher Janet Willett with her husband Luke Willett by her side. Photo: Tom Ward

Ross Salinas from nearby Iowa City won the 50k in 3:57:13 on a day hostile to fast times or course records. Coralville, Iowa’s Kathy Miller took the women’s title in 5:09:31. Michael Durkin of Valparaiso, Indiana, won the inaugural ruck division in 5:13:30.

The post-race party was an old-fashioned potluck spread held inside the Timber Lodge Dome near the Start/Finish. Everything looked great, but I was happy to finally be warm and dry. As things turned out, it could have been worse. Within 24 hours, it was snowing.

Type 1 diabetic extreme ultrarunner here who just finished the first SOLO run ever of RelayIowa’s 339-mile world’s longest relay course. Approx 10,000 feet of elevation later, let me tell you, Iowa is NOT flat by any means. Missouri River on the western boundary, Mississippi River on the eastern boundary, gives you about 70 miles worth of up-and-down rollercoaster hills, especially coming out of Sioux City.

Not the mountainside scramble some trail runs include, for sure, but plenty steep and definitely not flat.

Plenty of gnarly single track in Iowa by the way!