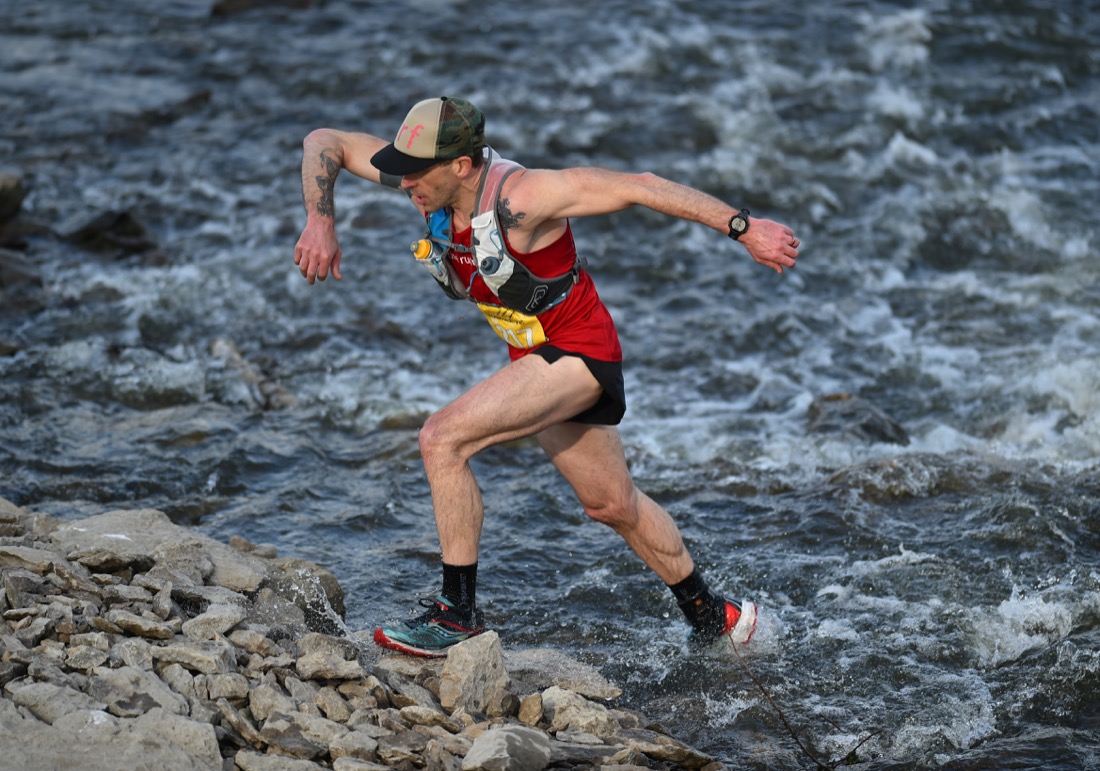 Hawkeye 50k winner Scott Gall crosses the spillway on the way to breaking his own course record. Photo: Tom Ward

On April 8, 2017, 83 Midwesterners came together to run one of Iowa’s few ultras. The Hawkeye 50K starts in Solon and sends runners on two laps around the man-made Lake MacBride. Whitetail deer were active, migratory birds created a rare display on the lake’s surface, and at least one coyote was surprised to find a parade of runners moving through its stomping grounds.

Despite persistent rain that let up just a few days before the race, the course was mostly dried out, with only a few instances of standing water. Unfortunately for runners hoping to keep their feet dry, one of these areas came about a half mile into the race.

Lake MacBride sits adjacent to and about twenty feet above the Coralville Reservoir—most of our lakes in Iowa are not naturally occurring. On its western edge, MacBride spills into “The Res,” and around mile seven of The Hawkeye 50K, runners have to navigate the spillway. Through most of the year, the spillway is an innocuous stream that can be crossed pretty quickly without so much as dipping a toe, but amid spring rains it swells to nearly a legitimate river. The ankle-deep creek pools and widens into a series of falls that require genuine care as runners are forced to pick their route across. Volunteers were available with a safety line, though some runners chose to dash straight through instead of heading to the more navigable lower portion.

While the first lap might have had runners weary of the water, by late morning they were welcoming its cooling effects. Temperatures started in the low forties but rose into the seventies by midday. One thing about weather in the Midwest: it just doesn’t make sense. The shaded portions were hot, the sunny sections were cool, and some runners got their first sunburns of the year just two weeks after slogging through the year’s biggest snowfall. While the bare trees did little to block the sun, they slowed the winds that later cooled runners while trying to push them into the ditch on the road sections. The sporadic standing water added a humidity to the air that reminded us why we race in spring and fall and avoid summer races like the plague.

The Hawkeye 50K is put on by the eastern Iowa running store We Run, and benefits Team RWB and The Wounded Warrior Project. Race director Brian Tharpe, timing officials, and volunteers remained at the Solon Recreation Area to allow runners to finish 90 minutes past the eight-hour cutoff. In true Iowa Nice fashion, the race concluded with a potluck.