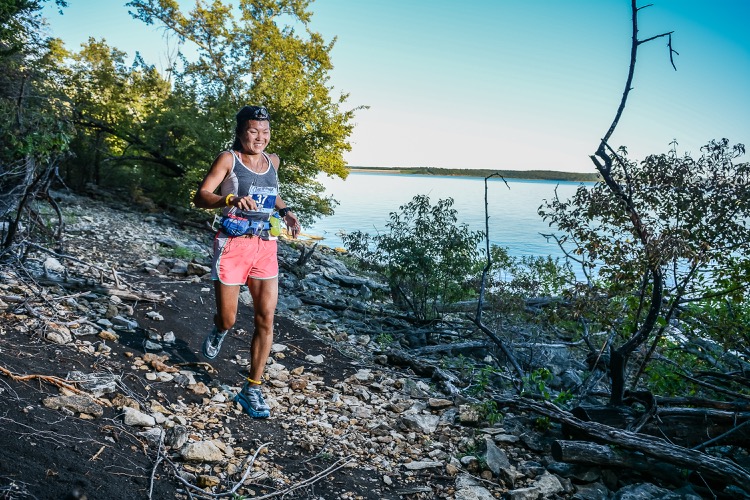 Xin Xin finally hits the trails for the final 25-mile loop, on her way to third overall in the 100-mile race. Photo: Rick Mayo/Mile 90 Photography

Race director Sherrie Klover stood at the center of the race headquarters shelter, surrounded by silent runners, crew and volunteers, and spoke through the palpable cloud of disappointment that lingered over their heads. “I’m so sorry that we’re running roads, guys,” said Klover. “This is a trail race. I’m a trail runner. I can handle road maybe one day a week, so I know this is a lot for you guys to handle.”

A week of heavy rain leading up to the Hawk Hundred had left the carefully groomed single-track trails muddy and unsuitable for foot traffic. Less than 24 hours before the race start, the trail steward – along with the parks department and Corps of Engineers that oversee the North Shore Trails at Clinton Lake in Lawrence, KS – made the call to switch the 25-mile single-track course to a mostly paved 25-mile loop. The good news: the locations and distance between the aid stations was roughly the same, and a special 3.5-mile section would be on grass. The bad news: asphalt.

“We’re doing this because we’re trail runners and we love our trails,” Klover said, closing her briefing to a round of applause. And then she added, “I encourage all of you guys to embrace the suck.”

Participants in the Hawk Hundred and 50 mile took to the pavement after heavy rains forced the single-track course to close. Photo: Rick Mayo/Mile 90 Photography

When the field of forty 100-mile runners and forty 50-mile runners set out for their first loop, it was to mostly clear skies and mild temperatures. That would be the trend for the day’s weather, which featured abundant sun, moderate humidity, a steady breeze and temperatures between 76 and 53 degrees.

The pace at the front was set early by Jeremy Morris of Kearney, NE. Morris has consistently placed first or second in other races run on the technical North Shore Trails (the Hawk 50-mile and Free State 100K). Of course, that didn’t mean much on the Hawk Hundred paved rain course – but he also has top-three 100-mile finishes on his resume on courses such as Heartland 100 (hilly gravel roads) and Lean Horse 100 (crushed-gravel rail-to-trail).

Russell Brown makes up time after taking a wrong turn early in the 50-mile race, on his way to second place overall. Photo: Rick Mayo/Mile 90 Photography

Tim Peterman established himself early as the person Morris would need to beat. He completed his first loop just six minutes behind Morris, and then surged on the second loop to move into first when Morris slowed as the heat of the day crept in. Peterman began the third paved loop in the lead and looking strong, with Morris stalking not far behind.

Partway through the leaders’ third loop, all of the 100-mile runners had a new challenge thrown at them. At 2 p.m., the trail steward re-evaluated the course and, thanks to the bright sun and breezy conditions, determined that the single-track course could be opened. Klover made the decision to move runners off of the pavement and onto the trails for their fourth and final loop.

Jaclyn Long cruises the pavement on her way to a first place overall victory in the 50 mile race. Photo: Rick Mayo/Mile 90 Photography

For many runners, it was a bittersweet moment. They would get a break from the monotony of the pavement, but they would also have to take their legs, which had grown accustomed to the smooth asphalt over 75 miles, and make them re-learn the art of stepping over rocks and roots… in the dark.

Peterman got the news about moving to single-track around mile 62. “I was having a few issues figuring out my nutrition at that point. That’s about the time Jeremy passed me, and I let him go,” said Peterman. “That’s also the point in the race I was feeling the angriest and most willing to act like a victim of circumstance. Jeremy gave me an encouraging word and helped me get my head back in the race.”

The lead runners ventured onto the single-track at mile 80, about an hour before sunset. Morris said he welcomed the switch to the trails for the last loop, but was “surprised at how hard it is to run those trails in the dark… tripping over the rocks and roots.” Meanwhile, Peterman had help from his pacer in getting his nutrition and pain management balanced, and closed the nearly one-hour gap to finish less than 22 minutes behind Morris’s race-record time of 16:12.

The women’s race was dominated by Xin Xin, who set a metronomic pace on the first three paved loops (3:48, 3:47, and 4:05 splits) and finished strong on the dark, technical trails in third place overall.