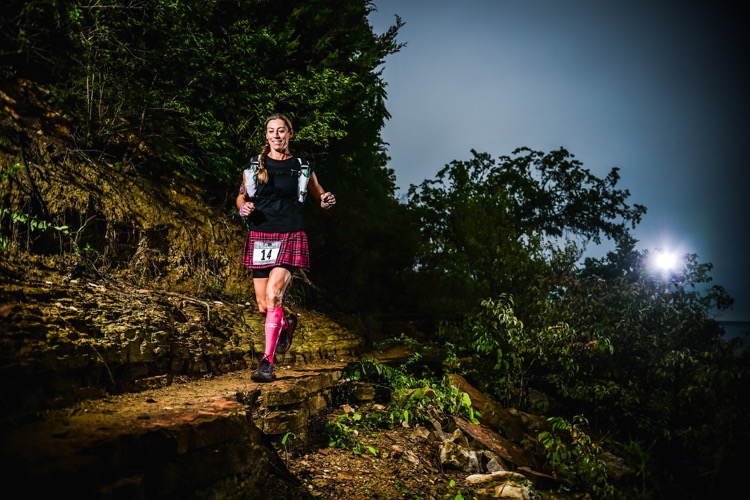 Hawk Hundred: Adversity on the Trail

The journey to breaking the tape at the Hawk Hundred started with a bit of adversity. For Nicole Fleming of Springfield, Missouri, it was physical—a broken calcaneus (heel bone) threatened to derail her goal of finishing her first 100-mile race in 2018. For Mark Pecaut of Leawood, Kansas, the adversity was psychological.

In the past, Pecaut said he’d approached the race mostly concerned with his time, and that caused him to lose focus on why he was even attempting the distance.

“That’s an awfully long way to go if you aren’t sure why you are doing it,” said Pecaut. “So, this year, my goal was to run and finish feeling ‘good’—and by that, I mean feeling like I was still human at the last stages. I wanted to laugh and joke and not just wallow in self-pity like what happens sometimes during a long race.”

The strategy paid off. Pecaut finished his first 25-mile loop in fourth place, and then maintained a fairly consistent pace, gradually working his way up through the field to finish first in 21:39:08. He remarked that the run was fueled by a few boiled eggs, a little soup, a can of Coke at every aid station—and a good attitude.

“I knew why I wanted to be there, and I was having fun—sometimes singing to myself, and chatting with people I had just met kept my spirits up,” said Pecaut, adding that he’d come to the right place to enjoy himself during an ultra. “The main characteristic of the Hawk is how serious the volunteers are about making it fun.” 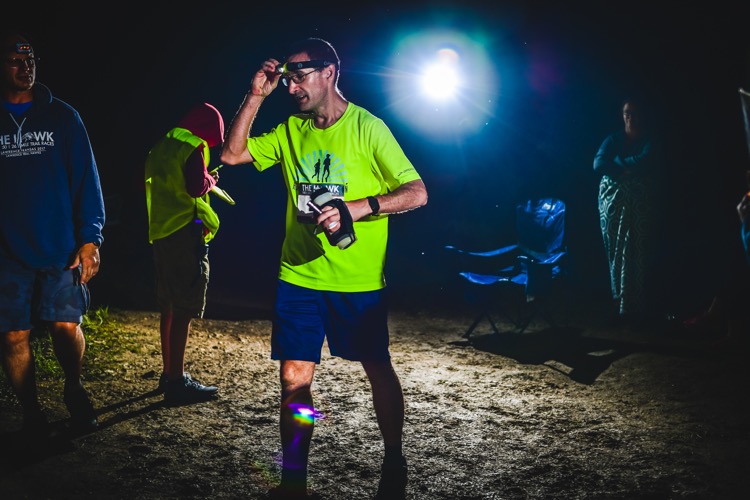 Along the way, Pecaut took in the wildlife and scenery that the trails at Clinton Lake State Park have to offer: hooting owls, running deer, pokey box turtles… and another runner whose path was blocked by an angry juvenile copperhead snake. “She was stuck for several minutes trying to get by,” said Pecaut of the other runner. “We found a very, very long branch and gently moved the copperhead off the trail, and then ran like hell.”

For Fleming, who was running with a broken calcaneus, the trail’s multifaceted terrain, varying from rocks to roots to the occasional venomous snake, actually proved kinder on her injury than roads. “In all honesty, before the Hawk the longest mileage I ran at one time on my broken heel was 13 miles,” said Fleming.

Despite an x-ray a month after the Hawk that showed her calcaneus had not mended, she said it did not cause her much pain during the event. Nicole said, “pure trail” was the main selling point when she chose this race, and it played to her strengths. She explained, “I’m a strong hiker, so I think I had an advantage on this trail. I always feel like I’m cheating when I do so much hiking, but I guess it works.”

Like Pecaut, Fleming came through the first 25-mile loop in third place. Keeping consistent splits moved her up to first place by the second half of the race, and she won with a time of 26:27:22.

“Chatting with runners along the way and seeing all the volunteers at the aid stations kept it fun,” she said. “I really went out just to finish this race and it’s still a shocker to win first overall female. As I’ve gotten older, I seem to take myself less seriously at races and focus on the fun factor—and I’ve been placing way better.”

“I think people get hung up on some of the famous races, or the hardest, or toughest, or most brutal,” Pecaut said. “The reason we do these long races is always personal. We do it to discover something about ourselves, or to surprise ourselves with what we are capable of, or because our dumb friends do it and we like hanging out with them. Most of these reasons cannot be enhanced by the fame of the race. So, my unsolicited advice is to find a gem with awesome, fun people.”