While Garmin tends to release new evolutions of their established product lines with some predictable regularity, it’s relatively rare that they introduce an entirely new product line. But that’s precisely what happened this spring with the release of the new Enduro watch, a model that is something of a hybrid between the Forerunner and Fenix series, with a massive increase in battery life that makes it ideal for ultrarunners. Battery life is further enhanced by the use of solar cell technology, which was only available on the Instinct and high-end Fenix series products. 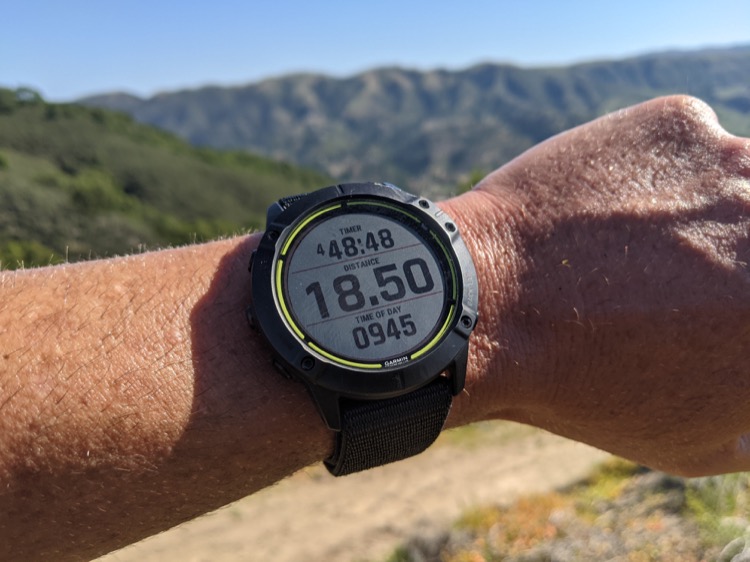 In carving out a middle ground between the Forerunner and Fenix series, the Enduro pulls most of the best aspects from each of those product lines, but also makes some compromises along the way that we’ll touch on shortly. For the ultrarunning crowd, it has some huge upsides that might make it the last watch you’ll ever need for everyday training, as well as for 100-mile or multi-day efforts. We’ve used ours on a 24/7 basis for several weeks of high volume training, as well as multi-sport use and a significant amount of landscaping and contracting work on the side.

The manual labor isn’t incidental – it has been a great test of the watch’s durability, with a significant number of scrapes and direct impacts, plus extensive exposure to sawdust and dirt. This is something we’ve been hesitant to do with Forerunner watches, but the build quality of the Enduro is comparable to the Fenix watches and honestly seems sort of indestructible. The Gorilla Glass face, diamond-like carbon titanium bezel, fiber-reinforced polymer casing and metal rear cover withstood every beating we’ve given this watch without any signs of wear. And for a relatively large watch, the Enduro doesn’t feel excessively bulky on the wrist, as it weighs about 10g less than the comparably sized Fenix 6X. 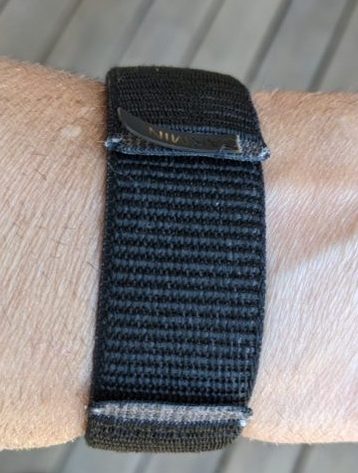 One exception to the outstanding overall build quality is the strap, which is a lightweight elastic hook and loop nylon that is sort of a throwback to primitive adventure watches of the 1990s. The strap itself is very comfortable, but the Velcro attachment seems to slightly lose its grip with multi-hour or shorter intense activities, as we often find ourselves having to re-tighten the band at some point. The ends of the band came with thin plastic logo strips attached, but the adhesive on both of these weakened and peeled within the first several weeks of use. Missing these pieces doesn’t affect the function of the watch, but it seems like a conspicuous quality control oversight for a watch at this price point. If you don’t like the elastic strap, the Enduro is also compatible with traditional silicon straps, but these must be purchased separately.

For ultrarunners, the headline feature of the Enduro is its massive battery life. It was pretty much inevitable that the Enduro would come along, as every other prominent player in the GPS space (Suunto, Polar, Coros) has introduced a new max battery model over the past year. Garmin wasn’t going to get left behind in that particular segment, and the Enduro actually vaults them over all of those competitors by a significant margin. With the Enduro, you’ll never have to charge your watch during a 100-mile race ever again. It uses a new battery platform and the solar Power Glass helps decrease the normal burn rate by as much as 10%. 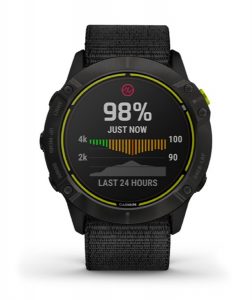 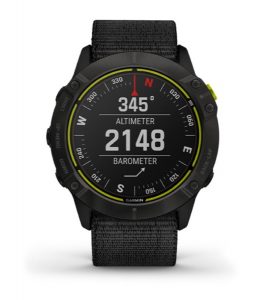 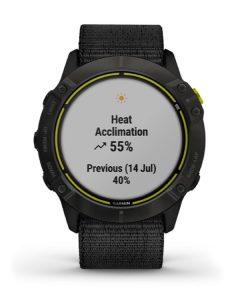 The Power Glass technology consists of two components: a 1mm strip around the perimeter of the watch face that has 100% photovoltaic levels, and a second source panel under the face of the watch that has a 10% photovoltaic level. Both of these panels are under the Gorilla Glass which, as we’ve noted, seems almost bulletproof. Together, these panels don’t provide enough energy to exceed the normal energy drain of the watch, meaning you can’t just set the Enduro out in the sun to recharge it, but they effectively work to slow the rate of battery drain during routine use.

Garmin notes that there needs to be sunlight conditions of 50K lux in order to optimize the solar absorption, and solar intensity can be tracked on the watch face as well as through the app. The measurement of 50K lux is equivalent to direct sunlight on a clear day, but we’ve been impressed with the solar intensity readings we’ve had even on overcast or foggy days during testing. In particular, we wore the Enduro on a 12-hour event that was cold and foggy almost all day, and the intensity readings afterward still showed several hours of peak absorption. Another impressive feature of the Enduro is the memory-in-pixel display that makes the entire display very easy to read in direct sunlight. 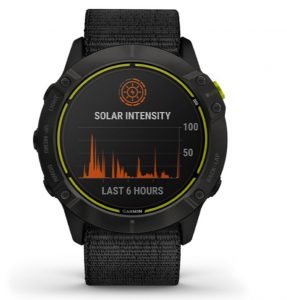 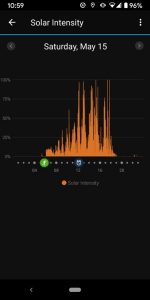 Solar intensity on an overcast day 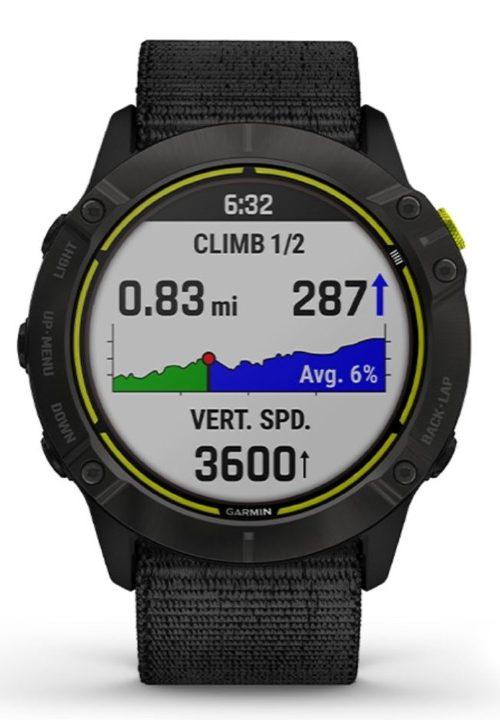 As with many high battery life GPS watches, tradeoffs have to be made in terms of features that typically drain the battery. On the Enduro, downloadable maps get left out, but in our testing, this has not been a significant issue. First, basic navigation features like breadcrumb trails, waypoints, and backtracking can be utilized as needed – the difference is that these don’t have a map overlay on the screen, just directions. You can also create routes in Garmin Connect that are then pushed to the watch, which allows turn-by-turn directions with buzz/beep alerts when it’s time to make a turn. This is an enormously helpful feature when you’re running through the night, and not being super-attentive to trail markings, to prevent you from going off course. (Note that the new ClimbPro 2.0 feature on this watch only works for pre-loaded routes.)

The other factor in our being cool with the lack of onboard maps is that we’ve become much more accustomed to using downloaded app-based maps on our phone. They’re much easier to read on the phone screen, can be used in airplane mode and in areas without cell coverage, and typically include much more information and details than can be found on watch-based maps. So, with turn-by-turn alerts on our wrist and maps on our phone, the tradeoff for increased battery life is an easy sell. 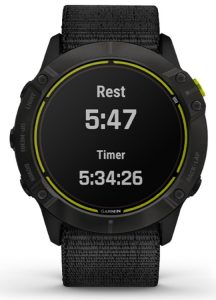 An ultrarunning-specific feature on the Enduro called “Ultrarun” appears as a separate activity in the selection lineup alongside run, trail run, track run, etc. In the ultrarun activity mode, you can start and stop a rest timer that doesn’t pause the overall activity or stop the GPS tracking – thus preventing the dreaded “I forgot to restart my watch!” problem all of us have experienced. This feature is ideal for runners who want an accurate assessment of how much time they are spending in aid stations. When recording your rest, the display screen turns to a dark background instead of light, so you’re reminded that it’s still in rest mode. After the event, you can see your cumulative time spent in rest breaks in comparison to your time in activity.

Another significant feature set that is left behind in the name of extended battery life are music controls, which are absent on the Enduro. As with the mapping features, this battery-preserving element is a matter of individual preference as to whether it’s a big deal. For us, it’s not. (We use our phone for music.) Otherwise, all of the fitness and health metrics found on the Forerunner 935/945 are included here, as well as a new Trail Run VO2 Max measurement that accounts for factors like irregular terrain and abundant climbing and descending when calculating VO2 Max. This is a long overdue addition to the fitness algorithm, but it won’t be exclusive to the Enduro for very long, as it will be included on future Fenix and Forerunner updates. 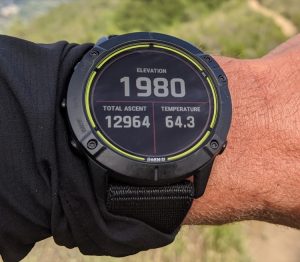 Elevation and vert reading during a climb

One curious anomaly we’ve experienced with the Enduro is that overall fitness tracking is less sensitive than it is with the Forerunner watches. Most notably, it rarely seems to boost our fitness score, even when doing twice-weekly speed sessions. Using the Forerunner 945, there’s a fairly predictable upward trend of VO2 Max in response to regular speed work, but the Enduro seems incredibly stingy in this aspect. After doing several weeks of regular interval training with no increase in VO2 Max, we started using the Forerunner for speed sessions and immediately, our fitness numbers trended upward again. This seems like a bigger issue than simply adjusting the watch strap, and more like a fundamental discrepancy in how fitness metrics are calculated by each device. We’re hopeful that this may be addressed in future updates.

While the Enduro lacks some prominent features found in the both predecessor Forerunner and Fenix series, it is an extremely compelling option for runners who value long battery life above all else. The user profile for choosing this watch over one of those other series may be somewhat narrow, but it does seem to encompass a large number of ultrarunners.

The Garmin Enduro is now available at https://www.garmin.com as well as multiple retailers.